Three years ago, with their passage of SB 367, Kansas legislators remade the state’s juvenile justice system.

A correctional facility for juveniles would soon close, the state would rely much less on “group homes” to house low-level offenders, and several alternatives to incarceration would be introduced into the system. The result: Between 2015 and 2018, the monthly average of Kansas’ juvenile custody population dropped by 63 percent.

Rep. J. Russell Jennings, the chair of a legislative committee created through SB 367 to oversee implementation of the reforms, is hopeful that this sharp decline will lead to better, long-term outcomes.

“The deeper you push young people into the system and congregate youth at a single place, the risk is that relatively low-needs youth, at a low-risk of reoffending, are somewhat influenced by higher-risk offenders,” he says. 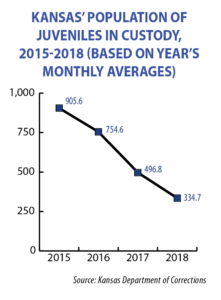 “So, by keeping them at home and in their communities with community-based programs, you’ve limited the negative impact that can be realized in a correctional facility.”

A year prior to the law’s passage, the Kansas Department of Corrections found that more than half of the juvenile offenders housed in group homes, or “youth residential centers,” had recidivated, run away, or not completed required programming.

In response to findings like these, a legislative work group was formed to study Kansas’ system, learn of best practices in other states, and explore evidence-based research with groups such as The Council of State Governments Justice Center.

That work ultimately led to the passage of SB 367.

Along with the recent drop in Kansas’ juvenile confinement population, the number of juvenile arrests has fallen — by 29 percent between 2015 and 2017.

The Kansas Department of Corrections, meanwhile, has been able to save $30 million in operating costs, and these savings are being placed into a special fund — known as the “Juvenile Justice Evidence Based Practice” fund — to help cover the costs of in-home programming for juveniles. By 2020, reinvestment in this fund is expected to reach $72 million. The alternatives to incarceration now being provided to juveniles include:

Jennings says money from the Evidence Based Practice fund also has increased the availability of mental health services.

“We made a conscious decision in 2016 to create a new level of service, which is a juvenile mental health crisis intervention placement option,” he notes.

“These are being regionally deployed and established to be able to provide assessment and stabilization services … for kids who manifest some form of a mental health issue that render them potentially dangerous to themselves.”