Gender gap in legislatures closes in 2019, but far from gone

With few exceptions, the Midwest’s legislatures have more women serving in them this year than in 2018. And in six of the region’s states — Illinois, Indiana, Michigan, Nebraska, North Dakota and Ohio — the numbers are at historic highs.

Why the jump? Why is there a gender gap in politics? What kind of effect does more female representation have on policymaking? Those questions have been the subject of much political science research over decades, and the answers are sometimes simple, sometimes complex. Here is what CSG Midwest learned in a interview with Debbie Walsh, director of the Center for American Women and Politics at Rutgers University.

The difference in the 2018 elections was that so many more women were on ballots across the country — a total of 3,418 female candidates sought state legislative seats. That is a nearly 800-person jump from the previous election and by far the largest number on record.

“When women run for office, they win at about the same rates as men,” Walsh says.

The gender gap, then, is rooted in what occurs — or doesn’t occur — at the decision-to-run stage. For example, as a group, male candidates tend to seek office based on a general interest in politics, whereas female candidates need to be motivated by a specific policy issue or problem. Women also report higher levels of concern about being able to raise enough campaign money. 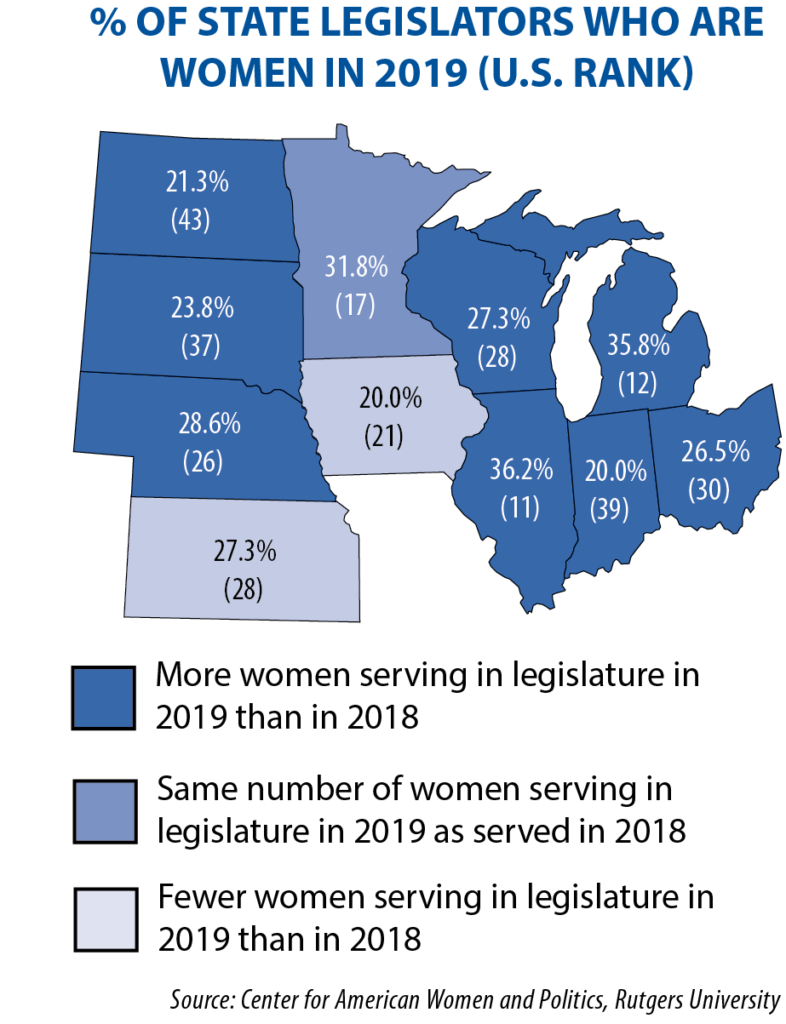 The recruitment of candidates has been another barrier. Men are more likely to be asked to run (by party leaders, for example), as well as to run without being asked. One big change in 2018, Walsh says, was that women didn’t wait for the “ask”; they chose to run on their own, motivated by factors such as the 2016 presidential race and the #MeToo Movement.

What’s the difference in legislating?

Every person brings a unique set of life experiences and policy perspectives to his or job in the legislature, Walsh says, and female officeholders tend to place a greater priority on issues related to families and children.

“Female and male legislators believe that women legislators have a special responsibility to represent women’s concerns … and that the presence of women has enhanced the representation of women in society and increased the access of other underrepresented groups to the legislature,” the Center for American Women and Politics notes in its study “Poised to Run.”

Men still outnumber women in every U.S. state legislature except one: Nevada. In the Midwest, Illinois comes closest to gender parity, and Michigan’s increase in the number of female legislators from 2018 to 2019 was the largest in the nation.

But even with the overall gains, Walsh says, there was one notable decline from the most recent election cycle — a drop in representation by Republican women: “We’re not going to get to parity without female legislators from both parties,” she says.