In May, trends in U.S. unemployment appeared to take a positive turn, one unexpected by many economists. 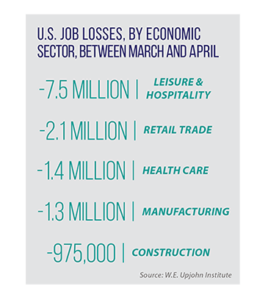 And as the Midwest’s legislators learned on a webinar that same month, changes in this closely watched economic indicator have huge impacts on states’ bottom lines.

“When the national unemployment rate goes up by one percentage point, there are budget shortfalls across all states of about $45 billion,” Michael Horrigan, president of the W.E. Upjohn Institute for Employment Research, said during the webinar hosted by the Midwestern Legislative Conference Economic Development Committee.

“The other estimate that we’ve come up with is that if a state unemployment rate goes up by one percentage point, states lose about 7 percent in tax revenue.”

Though the May numbers were promising — the result of factors such as the end of stay-at-home orders, business reopenings and an influx of federal dollars that, in part, encouraged businesses to retain workers — unemployment rates remain historically high.

“There’s going to be a slower rebound as firms reopen cautiously and change their business model,” Horrigan said, “but also as consumers themselves gain confidence in terms of doing things that require any sort of on-site presence.”

Over the longer term, he predicted that trends in economic growth will take the form of an asymmetric V, “a very sharp downturn going into the V, and then very shallow slow growth out of it.

State-specific data collected by Upjohn shows just how low the bottom of that “V” was in the early weeks of the pandemic: Between March 15 and May 14, total unemployment insurance claims exceeded 38 million, accounting for 24 percent of the labor force. Michigan was among the three U.S. states where more than one-quarter of its labor force filed initial unemployment claims.

In some cases, workers’ jobs are gone for good.

“[They’ll] need to find other occupations and be retrained,” Horrigan said, noting that they otherwise risk becoming long-term unemployed. “This is going to put a high amount of pressure on state workforce development agencies in terms of trying to help those folks get back into meaningful employment.”

In addition to emphasizing the importance of retraining, Horrigan touted the promise of state initiatives that promote “work sharing,” an unemployment benefit that gives employers an alternative to laying off workers when business is slow and/or cost cuts are needed.

According to the U.S. Department of Labor, Iowa, Kansas, Michigan, Minnesota, Nebraska, Ohio and Wisconsin are among the states that already have work-sharing programs established in law. Along with Horrigan, leaders of JobsOhio (the state’s private, nonprofit economic development corporation) joined legislators on the webinar to discuss how Ohio is managing a three-stage economic response to the pandemic: relief, restart and recover. Part of the recovery stage, they said, will be identifying sectors expected to thrive and need more workers.

“We’re assessing the effectiveness of any of the new programs that we put in place, and we’re trying to remain nimble,” said Matt Waldo, director of research and analysis for JobsOhio.

For all states, Horrigan said, continued congressional assistance will be vital. He suggested tying federal aid to state and local governments based on monthly jobless rates, for example, while also addressing shortfalls in state unemployment insurance systems.

“Unless states get more aid from the federal government,” he said, “they are going to be in a position of having to cut back severely the services that they provide or increase the tax revenues they take in.”