A historically high number of women lawmakers will be part of U.S. state legislatures in 2021

For the first time in U.S. history, more than 30 percent of the nation’s legislators are women. As a result of the November 2020 elections, the number of female legislators increased in 31 U.S. states, including seven states in the Midwest (see map), according to the Center for American Women and Politics at Rutgers University.

Women make up the majority of legislators in one state, Nevada, as well as the majority in three state senates and four state houses (none in the Midwest).

Scholars who study the gender gap in politics often point to the “decision to run” stage as being the most important factor (women candidates win at about the same rates as men). For example, as a group, male candidates tend to seek office based on a general 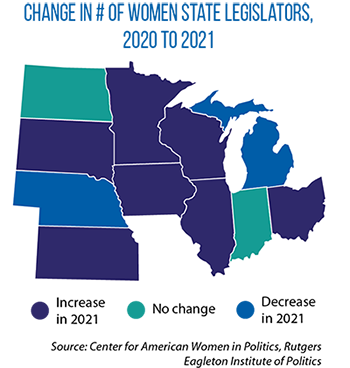 interest in politics, whereas female candidates more likely need to be motivated by a specific policy issue or problem. Women also report higher levels of concern about being able to raise enough campaign money.

This election cycle, a record number of women were on the ballot as state legislative candidates. One notable development from the 2020 election cycle was a rise in the number of Republican female candidates on the November ballot— 1,106 compared to 993 in 2018.