In a given year, about $85 billion worth of energy products gets shipped to the United States from Canada, the largest source of U.S. energy imports. Much of this trade occurs underground, via multiple pipelines that travel through every state in the Midwest. In two of these states, Michigan and Minnesota, important developments surfaced late in 2020 about the future of two of these pipelines, both of which are owned and operated by the Canadian company Enbridge.

Shutdown of Line 5 in Michigan

Enbridge’s Line 5 carries oil and natural gas liquids from Superior, Wis., to Sarnia, Ontario, including a stretch that runs underneath the Great Lakes through the Straits of Mackinac. In November, Michigan Gov. Gretchen Whitmer said she would revoke a 1953 easement that permits Enbridge to run the dual pipeline through the Straits of Mackinac. It must be shut down by May, she said, citing unaddressed structural problems and “an unacceptable risk of a catastrophic oil spill in the Great Lakes.”

The time between now and May 2021 will “allow for an orderly transition to ensure Michigan’s energy needs are met,” Whitmer added.

Her announcement came after a 15-month study done by the Michigan Department of Natural Resources on Enbridge’s compliance with the state easement. Along with noting “historic failures and current non-compliance,” Whitmer and DNR officials said Line 5 is vulnerable to anchor strikes and other damage because of its location in a busy shipping channel. In response, Enbridge noted that a federal regulator has confirmed the pipeline’s safety. It also criticized the DNR’s review process.

Enbridge already has been planning to develop a Great Lakes tunnel to enclose the dual pipeline, but completion of that project is still several years away. Michigan Sen. Ed McBroom believes “the decision to shut down the pipeline, and particularly the timing, was faulty.” Enbridge has accelerated its timeline to build the tunnel, he says, and “there are already mitigation efforts underway.” A state law from 2018 also strengthened oversight in order to improve pipeline safety. 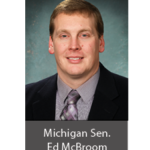 McBroom represents a district in the Upper Peninsula that relies on Line 5-delivered propane to heat homes. (The pipeline supplies 65 percent of the UP’s propane needs.) “Alternatives for providing heating fuel after the pipeline shuts down are not well laid out,” McBroom says, adding that a closure of the pipeline will pose supply problems across the region.

Supporters of keeping Line 5 open also note that its closure will lead to a greater use of riskier, costly modes of transport (truck, rail or ship).

The company recently received positive news about its Line 3 replacement project from Minnesota. In November, the state Department of Natural Resources issued the remaining approvals of the company’s proposal to replace one of its six pipelines that cross the state.

Eight permits were issued, setting conditions for parts of the project, including for crossing public wetlands, the use of water for the project, and the protection of threatened and endangered species. Enbridge will provide $2.5 million to fund research, conservation planning and recovery efforts for plant species affected by the project.

The Minnesota Pollution Control Agency issued approvals the same day as the DNR, including water quality certification. The Line 3 Replacement Project still requires other permits, including a determination from the U.S. Army Corps of Engineers.