In late October, Wisconsin became the latest Midwestern state to suspend, rather than terminate, Medicaid coverage for people who are incarcerated, a policy step designed to ease a released person’s re-entry into society and reduce recidivism.

The move means Medicaid enrollees who are incarcerated will have their health care benefits re-evaluated before they are released from jail or prison, according to the state’s Department of Health Services. The prior policy of termination often delayed access to medical and behavioral health care, as well as medications, following an individual’s release. 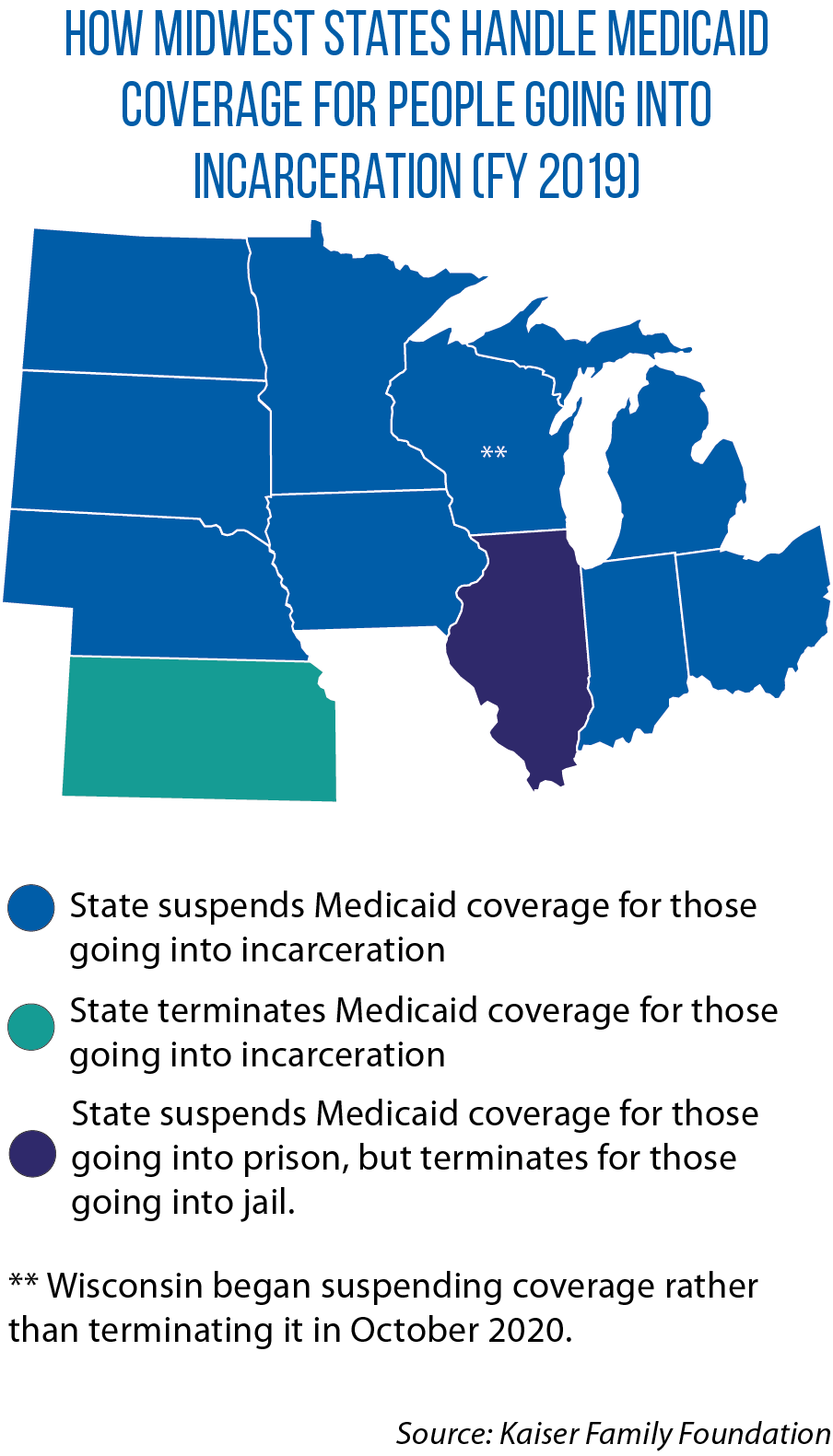 is critical to breaking the cycles of chronic homelessness, reliance on emergency care and re-arrest,” Department Secretary-designee Andrea Palm says.

Jack Rollins, director of federal policy for the National Association of Medicaid Directors, says suspension of Medicaid coverage allows states to more easily re-enroll an individual upon re-entry into the community, which is usually part of a strategy to get that person immediately plugged into care management options and any treatment necessary to manage that person’s health needs.

The first days of community re-entry are critical for linking individuals to supportive services that can prevent recidivism, improve individual health outcomes, and reduce costs to the state, he adds.

One study of state of Washington inmates found that the first two weeks of release were especially risky; these individuals (released between 1999 and 2003) were 12.7 times more likely to die during this period than the general population. Drug overdose was the leading cause of death.

On a range of indicators, state and federal prisoners are at greater risks of health problems than the general population — they have higher rates of high blood pressure, asthma and blood pressure, for example, and two-thirds of inmates have a substance abuse disorder of some kind, the Commonwealth Fund noted in a 2019 issue brief.

In Wisconsin, 9,585 people were released from jail or prison in federal fiscal year 2019; nearly 70 percent of them were Medicaid eligible. Currently, more than 20,000 incarcerated individuals are supervised by the Wisconsin Department of Corrections’ Division of Adult Institutions.

Wisconsin health officials say the policy switch will reduce costs for community organizations and free or low-cost clinics, the entities that often care for individuals upon their release from prison.

They note, too, that Medicaid will pay the inpatient hospital expenses for inmates with suspended benefits. This policy will result in cost savings for the state Department of Corrections and county jails.

In the Midwest, most states already have policies to suspend, not terminate, Medicaid eligibility for incarcerated individuals (see map).