In one of its last acts of the 2020 session, the Michigan Legislature passed 20 bipartisan bills on criminal justice reform, all of which were the result of a multibranch working group that helped connect the role of policy to the state’s rising jail population. 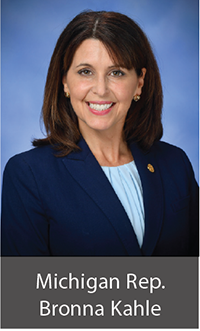 The Joint Task Force on Jail and Pretrial Incarceration was formed in April 2019 to figure out why this population had risen from 63 inmates per 100,000 people in 1975 to 166 in 2015 — despite Michigan’s total crime rate dropping dramatically over this 40-year period.

“Michigan has a problem with over-criminalization,” says Rep. Bronna Kahle, who helped lead efforts to get the measures passed. “Before this package of legislation, there were more than 3,100 criminal acts defined in Michigan law.”

After analyzing data from 83 individual counties and finding statewide patterns, the task force delivered 18 recommendations to the Legislature in January 2020.

For a brief while, it seemed that Michigan would quickly enact sweeping criminal justice reforms based on the task force’s recommendations. COVID-19 temporarily halted this momentum. Not until the fall were legislators able to refocus on those recommendations.

“Everyone can agree that dangerous drivers should not be on the road,” Kahle says. “But taking away a person’s driver’s license has become our default penalty to enforce dozens of rules that have nothing to do with driving safety.” 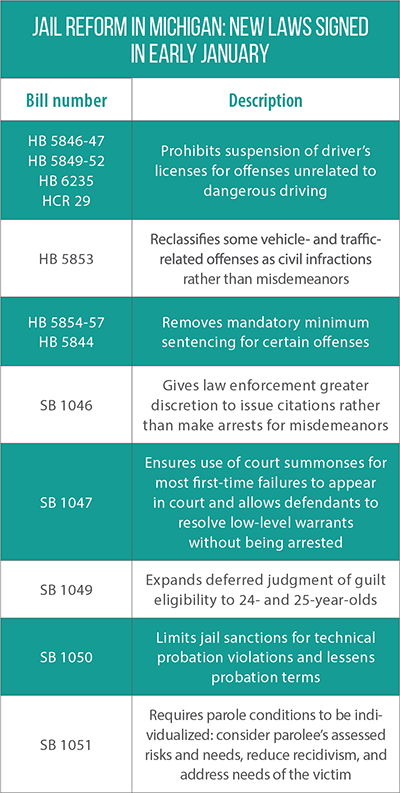 Under HB 5846, driver’s licenses will no longer be suspended or revoked due to offenses unrelated to dangerous driving (for example, certain drug-related crimes or failing to pay child support). HB 5853 reclassifies many traffic misdemeanors as civil infractions, thus allowing people to pay a ticket instead of having to appear in court.

Kahle, who sponsored both of these bills, says she became interested in driver’s license suspensions because of how disruptive they are to workforce participation.

“Eliminating license suspensions is not about removing accountability, she says. “It’s about finding smart and targeted ways of holding people accountable.”

Several of the task force’s other recommendations are now state law. For example, the use of mandatory minimum sentencing has been greatly reduced, and police now have greater discretion to issue citations and court summonses as opposed to making arrests.

Put together (see table), these bills seek to increase the use of jail alternatives and reserve limited jail space for those actually threatening public safety, Kahle says.

She encourages other states in the Midwest to take a closer look at Michigan’s path to reform: Forming a bipartisan task force that helps point the way to “a smarter, more common-sense approach to addressing low-level offenses.”