The COVID-19 pandemic set back enrollment and investments in state-funded preschool, and wide disparities in access to high-quality early learning remain across the country, according to the most recent “State of Preschool Yearbook,” a national study published annually by the National Institute for Early Education. 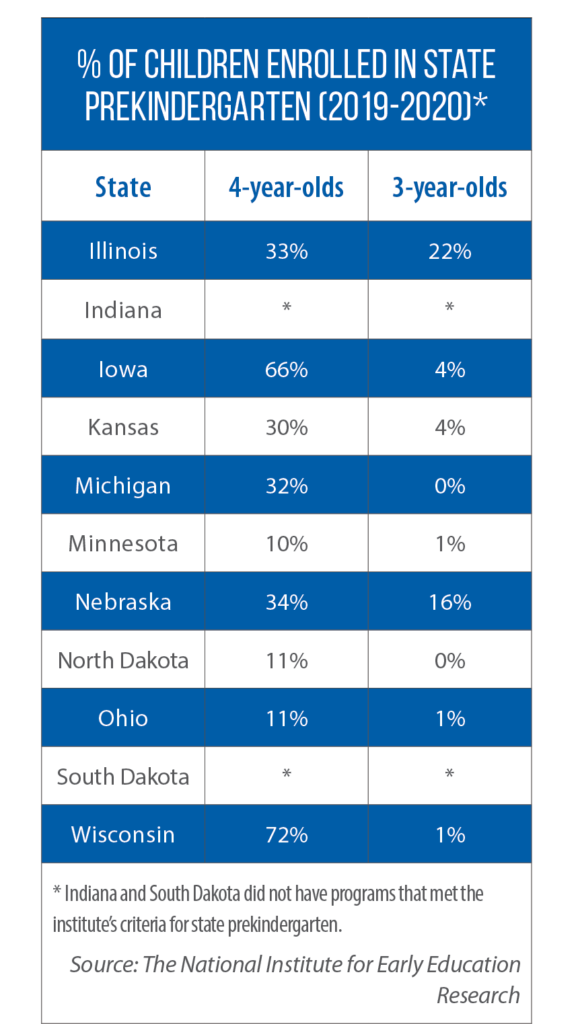 For many years, the study’s findings have shown a continuing rise in access and funding. For example, since 2002, state investments in preschool have more than doubled (when adjusting for inflation), and the percentage of 4-year-olds in state-funded preschool has risen from 14 percent to 34 percent. But access across the country has largely remained the same for the past few years (even prior to the pandemic), and preliminary estimates for 2020-2021 show that enrollment and spending actually fell.

“Reductions in preschool enrollment occurred for two main reasons — parents did not want to enroll children (for a variety of reasons), and state preschool budgets were cut,” the report’s authors say. “We are optimistic that the demand for preschool will rebound in fall 2021. … However, not all states are preparing to reinstate pre-pandemic levels of public funding for preschool in future school years.”

The institute’s study also provides state-by-state comparative data and profiles. Here are some notable findings for the Midwest:

• Wisconsin and Iowa have among the highest rates of 4-year-olds enrolled in state-funded prekindergarten. In Wisconsin, nearly all school districts offer kindergarten to 4-year-olds and get funding from the state for it. Likewise, Iowa’s Statewide Voluntary Preschool Program is available to 4-year-olds, and nearly all local school districts participate. In both states, the funding formula is based on K-12 student aid; participating districts receive a per-student amount equal to about half that for K-12 pupils.

• In most states, enrollment of 3-year-olds in state-funded prekindergarten trails far behind 4-year-olds. One exception: Illinois, where about 22 percent of 3-year-olds are enrolled, second highest rate in the nation among the 50 states. The state-funded Preschool for All prioritizes access for young children from low-income families and/or who are at risk of academic failure.

• Michigan was one of only six states (and the only one in the Midwest) to meet all 10 of the institute’s standards for high-quality early childhood education. Those include curriculum supports, maximum class sizes of 20 or fewer students, bachelor’s degree requirements for teachers, professional development and specialized training for staff, and student screenings and referrals.

• In nine of the Midwest’s 11 states, at least some 3- and 4-year-olds are enrolled in state prekindergarten, as defined by the institute. Indiana and South Dakota, while supporting preschool education in some way, did not have programs that met the institute’s criteria. The criteria include whether the program is funded, controlled and directed by the state; whether early-childhood education is the primary focus; and whether a group learning experience is offered.