Almost 20 years have passed since the United States and other countries temporarily closed market access to Canadian beef and cattle, a response to cases of mad-cow disease in Canada. “We don’t ever want our borders closed again like [that],” says Ralph Eichler, a member of the Manitoba Legislative Assembly.

He was first elected to the Legislative Assembly around the time of that shutdown, and has since seen and helped lead some of Manitoba’s efforts to prevent future disease outbreaks.

Yet such outbreaks remain an ongoing threat on both sides of the border, to food supplies and to the economies of the agriculture-reliant Midwestern states and provinces. Of particular concern in early 2022: African swine fever, a highly contagious, fatal disease of wild and domestic pigs; and highly pathogenic avian influenza.

In 2020, Iowa State University researchers estimated that a U.S. outbreak of African swine fever would cost the nation’s pork industry $50 billion over 10 years. The economic impact would be felt greatest in the Midwest, home to seven of the nation’s top 10 states in pork sales (Iowa, Minnesota, Illinois, Indiana, Nebraska, Ohio and Kansas.) In Manitoba, hogs are the province’s third most important commodity, valued at more than $1 billion.

“It’s about being ready,” Eichler says. “Over the last several years we have used our experience with other pig diseases … to educate drivers, owners, employees and plant workers about how important biosecurity is.”

Most recently, Manitoba has prioritized two projects: one aimed at eradicating diseases spread by invasive pigs, and a second to improve disease surveillance at high-traffic facilities.

What if an outbreak does occur in Canada?

One step being taken now is to limit the economic effects by creating different “zones” within the country, says Maurice Bouvier, whose duties as Manitoba’s assistant deputy minister of agriculture include market access and resiliency.

“So if there is an outbreak, only a portion of the country loses market access,” he notes.

The province also is developing plans to handle the animals should mass euthanasia be necessary, including identifying sites for carcass disposal.

As a result, state officials found areas in need of improvement — for example, encouraging livestock trucks to be washed as soon as empty as well as recognizing that employees who raise livestock at home need to be provided additional protective gear and biosecurity education.

Iowa leads the nation in hog sales, and Minnesota ranks third, according to the most recent U.S. Census of Agriculture. Researchers at universities in those two states (Iowa State and the University of Minnesota) have helped develop the Secure Pork Supply Plan. It includes a strategy for limiting the movement of animals and animal products if swine fever or foot and mouth disease are ever found in North America. 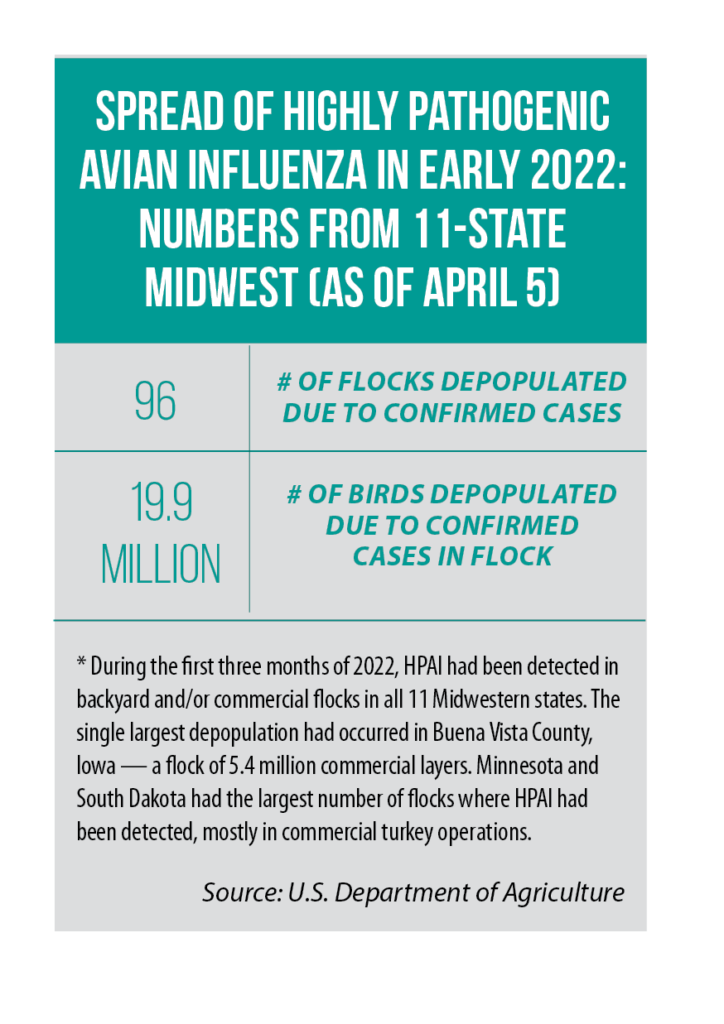 Purdue University researchers, meanwhile, are working on rapid field detection tests for African swine fever. They also have developed an online test for farmers to conduct risk assessments of their operations.

For poultry producers in the Midwest, all eyes recently have been on the spread in early 2022 of highly pathogenic avian influenza, or HPAI. Seven years ago, HPAI forced the depopulation of 51 million birds (the majority of which were in the Midwest) and the temporary closure of key U.S. poultry markets. Since then, efforts have been made to improve compensation plans for U.S. producers impacted by an HPAI outbreak, as well as to upgrade euthanasia and disposal procedures.

Regardless of the species, state and provincial response plans for disease outbreaks tend to have several common strategies: biosecurity procedures to protect non-infected animals (isolation, cleanliness of living spaces, restrictions on access , etc.); whole herd (or flock) depopulation; and the use of large containment or protection zones.