Before they voted to legalize the use of recreational marijuana, legislators in Illinois committed to learning as much as possible from the experiences of other states. Rep. Kelly Cassidy, lead sponsor of the bill signed into law in June (HB 1438), and others spent two years visiting growers, processors and dispensaries across the United States; they also held more than 100 stakeholder meetings in the state. 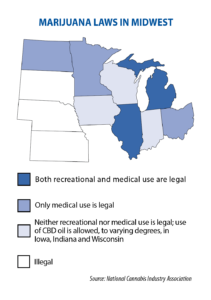 The end result: a 600-plus-page bill much different than any other state’s law on marijuana legalization. For example, the bill focuses heavily on ensuring diversity in ownership of the new businesses that come from legalization, and investing in the communities and people disproportionately impacted by enforcement of the state’s old laws on cannabis.

But another facet of the new law stands out as well, and reflects what lawmakers found in their fact-finding work prior to the bill’s introduction.

“[We were] struck by the intensive power and water usage involved in growing marijuana,” Cassidy says. In response, lawmakers included environmental requirements and efficiency standards for those seeking a license to cultivate marijuana.

Applicants, for example, will provide estimates of their electricity, gas and water usage; plans for energy conservation; and policies for waste management and recycling. The growers’ lighting and watering systems also must meet technology and/or efficiency standards.

“Illinois’ business regulatory system is already very rigorous, even more so for medicinal cannabis growers, so they are already accustomed to strict oversight and reporting,” Cassidy says. She expects state-licensed growers to embrace these and other new goals and requirements around sustainability.

No new full-size growers will be permitted until July 2021, and only then once the state makes a determination on the market supply of and demand for cannabis. Cassidy is hopeful that the coming rise in cannabis-related industries will provide an economic boost to Illinois’ rural areas, some of which have been hurt by recent closings of mines, manufacturing plants or state facilities. “[This] kind of economic development opportunity just doesn’t come along very often, particularly for rural communities,” she says.