Some states grappling with their ongoing opioid crises have tried to make manufacturers pay for treatment and prevention programs by levying a per pill fee or an excise tax based on an opioid’s potency.

Minnesota, which in May became the first Midwestern state to levy a fee on opioid manufacturers, took a different approach. HF 400 creates a new license category for makers of “opiate-containing controlled substances” and sets the fee to get one at between $55,000 and $250,000.

The law also hikes licensure and registration application/renewal fees for wholesalers and manufacturers of non-opioid drugs from between $150 and $235 to $5,000. Those steps will create $20.9 million in new annual revenue for local prevention and treatment programs, according to Session Daily, an online publication of the Minnesota House.

Rep. Dave Baker, whose son died in 2011 from a heroin overdose, says this licensing reform was overdue for something as dangerous as opioids and other potentially addictive substances. 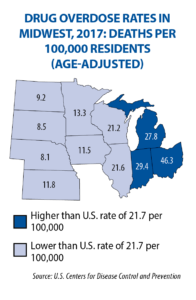 Other states have levied or tried to levy taxes and per pill “impact fees.” For example, an Iowa bill (HF 208, which didn’t advance) would have created an excise tax of 5 percent on gross receipts for drugs, including opioids, sold wholesale to medical practitioners.

Proposals to tax opioids based on their potencies have been more prevalent in the Northeast, either through stand-alone legislation or governors’ budget plans. Baker says Minnesota legislators considered this approach, but decided it was too open to legal challenges. There were also concerns that a tax or per pill fee would just raise the cost of medical care as they would get passed on to insurance companies and — ultimately — consumers.

The need for more money for treatment is understandable, but per pill fees or potency-based taxes are counterproductive because consumers pay only their insurance co-pay, Brill says. Drug makers will simply pass on the tax or fee to insurance companies, which will raise rates on everyone, he adds.

Baker says Minnesota spends about $230 million per year on addiction treatment, and the new law is a small step to helping provide more funding.

“This isn’t perfect, we’re going to keep working on this,” he says. “But for now, it’s a good start. It was time to do this in Minnesota.”