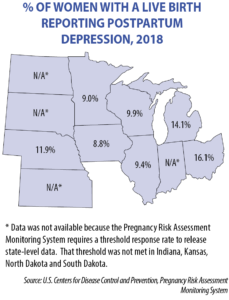 Flowers says the legislation came about due to a newspaper story about a new father who, after his wife had given birth, noticed she was acting strangely; when a doctor told him to wait for an examination until her next scheduled checkup, he didn’t wait, but put her in a mental health facility — an act that saved her life.

Flowers says her bill drew language from a 2018 California law (AB 2193) that requires private and public health plans and health insurers to create maternal mental  health programs. It also requires obstetric providers to confirm that screening for maternal depression has occurred or to screen women directly, at least once during pregnancy or the postpartum period.

(A related Flowers-sponsored bill signed into law in August, HB 2895, requires the Illinois Department of Public Health to provide continuing education for staff working with pregnant or postpartum women, starting next year.)

“There is a huge gap in care for perinatal mental illness, and having a law like this makes a big difference,” says Wendy Davis, executive director of Postpartum Support International, a 33-year-old organization working to increase public and professional awareness of postpartum depression.

Illinois is also the only state where postpartum depression is a reason to review criminal convictions.

Other Midwestern states, though, have taken steps in recent years to address maternal mental health: