On a given day, an average of $2 billion in goods and services travels between the United States and Canada. In the middle of much of that cross-border activity: the Midwest’s states and their neighboring Canadian provinces.

The month of March 2020 will be remembered as a historic one in that relationship.

In response to the coronavirus outbreak, the two countries closed all nonessential traffic at the border. Though these rules did not apply to most trade, automakers (central to cross-border trade and supply chains in this region) subsequently shut their factories. 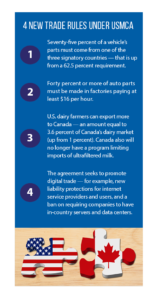 Somewhat overshadowed by these extraordinary actions, though, was the start of an important new chapter in U.S.-Canada trade relations. On March 13, the Parliament of Canada approved the United States-Mexico-Canada Agreement, or USMCA, thus ensuring that this successor to the 26-year-old North American Free Trade Agreement will go into effect. (The USMCA already had received formal approval by the U.S. and Mexican governments.)

“[It] modernizes customs procedures and adds provisions for digital trade and e-commerce, which will have a positive impact on our economy and the speed of doing business across our shared border,” Saskatchewan Minister of Trade and Export Development Jeremy Harrison says.

Along with this modernization, the USMCA has new country-of-origin requirements and labor standards for the automotive sector and gives U.S. dairy producers greater access to the Canadian dairy market (see graphic for details).

Colin Robertson, a former Canadian diplomat who was on the negotiating team for NAFTA, says the USMCA had considerable support in the Parliament, but the impact on that country’s dairy farmers remains a concern. According to Robertson, the Liberal Party government led by Prime Minister Justin Trudeau has promised compensation for farmers affected by policy changes under the USMCA.

Dairy trade between Canada and the United States has been a contentious issue for several years. Canada operates under a supply management system that develops plans for production, administers pricing and sets import quotas. When the Canadian government set new import quotas on ultrafiltered milk (used to make cheese and yogurt), U.S. dairy farmers were hit hard economically.

Despite this recent dispute, along with others involving U.S. policy on steel and aluminum, leaders in both countries recognize the importance of the overall trading relationship, across many sectors.

“[In 2019] Saskatchewan’s exports to the U.S. represented more than 54 percent of the province’s overall exports,” Minister Harrison notes. The United States, in fact, is the top export market for all four provinces that make up The Council of State Governments’ Midwestern Legislative Conference (Alberta, Manitoba, Ontario and Saskatchewan); likewise, Canada is the top export market for most states in the Midwest.

This activity slowed as the result of the COVID-19 pandemic. But over the long term, the hope is that the USMCA will modernize and strengthen trade between the two countries.