Though overshadowed by governors, legislators have role in plans for economic reopening, recovery

Since early April, Rep. Dave Greenspan and 23 other members of a specially formed Ohio House task force have been meeting, sharing ideas, and getting the perspective of business owners across various sectors and geographic areas. 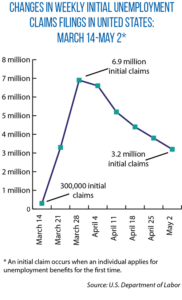 One question above all else is guiding his work on the task force: What can we do to help businesses reopen, and remain open, safely?

“We’re not looking at the same things that the governor is looking at as far as public health protocols,” Greenspan says. “Our attention is on what we can do either directly through legislation or by facilitating, through other bodies, actions that allow [businesses] to open.”

That Economic Recovery Task Force in Ohio is an example of the important work being done by the Midwest’s legislatures, even during a time when the powers of governors have been strengthened due to the public health emergencies caused by the COVID-19 pandemic.

“Every state of emergency ends and executive orders eventually cease to exist,” Michigan Sen. Ken Horn says. “And the legislature will take its rightful place again as a co-equal

Between February and April, the nation’s unemployment rate rose from 3.5 percent to 14.7 percent, a number not seen since the Great Depression. Numbers like these are driving legislative task forces such as Ohio’s to develop a plan for recovery. Each member of the task force, for example, was asked to submit a set of recommendations; they will then be compiled into a summary document. Greenspan’s ideas for state action include:

Greenspan also worries about the costs to businesses of making unemployment payments, which, in some cases, exceed earnings. “That’s obviously a concern as employers try to get their employees back to work,” he says. Ohio Gov. Mike DeWine has laid out a plan for a phased reopening of businesses and economic activity, with new safety and distancing measures in place. In May, a number of retail businesses were allowed to open, then restaurants could open with outdoor seating and, finally, indoor dining (with distancing guidelines) resumed. 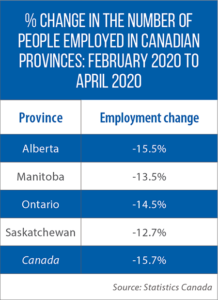 “I happen to like what our governor did,” Greenspan says of DeWine’s reopening of restaurants. “Unlike [many] other states, who have set a maximum of 25 or 50 percent occupancy, our governor has said, ‘You’re open, you figure it out.’ “ (Restaurants are allowed to seat as many customers as they would like as long as distance protocols are followed.)

Ohio and Michigan are among the many states where tensions have arisen among the legislative and executive branches. In early May, the Ohio House passed a measure (a version of SB 1) to restrict the powers of the state’s health director. It would limit an order from the health director to a maximum of 14 days; it could then only be extended with approval of the legislature’s Joint Committee on Agency Rules Review.

As of May, the amended bill still needed to be taken up by the Senate; Gov. DeWine has said that he would veto it.
Republicans control the legislative and executive branches in Ohio. Power is divided in Michigan, and the Republican-led Legislature filed a lawsuit in early May to end Democratic Gov. Gretchen Whitmer’s orders that closed most non-essential businesses and required residents to stay at home. Legislators argue that the governor overstepped her legal authority.

Sen. Horn is among those concerned about the role of the Legislature in managing the response to the COVID-19 crisis. “There is no co-equal branch of government in Michigan right now,” he says.

As chair of the Michigan Senate’s Economic and Small Business Development Committee, Horn will be one of the Legislature’s key leaders in crafting policies related to the economic reopening. The first issue to deal with, he says, is health and safety.

“What safety protocols and protective equipment are needed, including distancing?” he asks. “Different protocols can be applied to different work arrangements and designed for each industry, including the numbers of workers involved and their contact with customers.”

“The goal is to make the workplace as safe as home,” he adds. “You follow the rules, stay sheltered, go to work in a safe workplace, go back home again and get the economy rolling.”

Helping businesses create these safe work environments is another policy consideration for states. “How do businesses make the investment of getting their people back to work and making the appropriate changes in the workplace to be safe?” he says. “Do we give them tax credits, grants, loans? How do we get them started again?”
Horn also stresses the need for a regional approach within a state, noting that “some counties are not as affected [by COVID-19], so maybe they can open up a little sooner and a little faster.”

At the same time, variations in different states’ reopening plans can create a problem as well. “If other states are getting back to work and Michigan is not, then we’re behind the eight ball,” he says. “We need to watch our borders carefully and work state-to-state — with our governors and their executive orders, but backed up by the legislature — to open up the same industries at the same time.”

Over the longer term, Rep. Greenspan does see economic opportunities ahead.

“We’ve been too reliant on other countries for our public health supplies, whether it’s medicine, medical equipment or [personal protective equipment],” he says. “How do we encourage domestic growth of those industries so we can re-engage our manufacturing community and grow our manufacturing base? We are sitting on an opportunity that I think we should seize.”

Greenspan also points to the need for states to focus on expanding broadband access.

“If we’ve learned nothing from this, we have learned how disconnected parts of our state — urban, suburban and rural — are from the internet,” he adds. “And it’s important when we look at not only distance learning for our kids, but when we look at how this experience is going to change how business operates.”