Reduced federal and state investments in public health over the past decade. 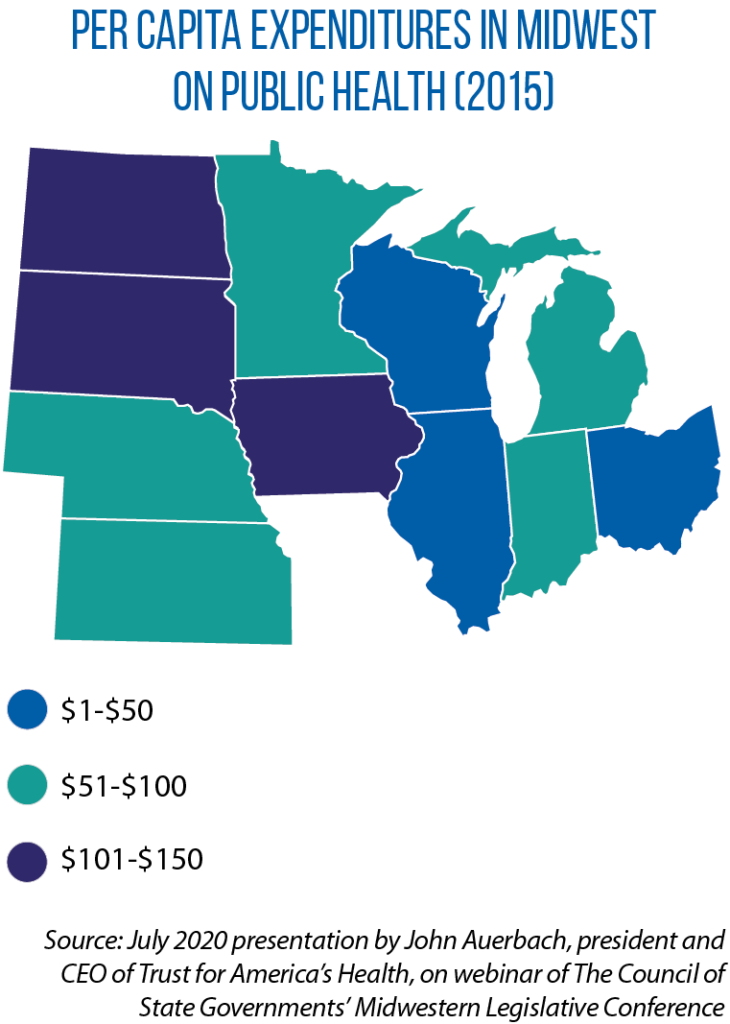 Inequities in the types of services and health infrastructure needed to keep individuals and whole communities well.

They all added up to a country vulnerable to being hit hard by a transmissible disease such as COVID-19, two public health experts said to legislators during a July webinar of The Council of State Governments’ Midwestern Legislative Conference. Their message: Learn the hard lessons taught by the COVID-19 pandemic, and embed them in future policy decisions about public health. “We’re willing to spend a lot of money without question when people get sick, but we don’t spend very much money to stop people from becoming sick,” John Auerbach, president and CEO of the Trust for America’s Health, said to legislators participating in the webinar.

In the United States, for every $1 spent on medical care, 55 cents is spent on public health and social services. Compare that to Europe, where countries there spend $2 on public health and social services for every $1 on health care. Dr. Nasia Safdar, medical director of infection control for the University of Wisconsin Hospital and Clinics, noted that the risk of dying or becoming gravely ill from COVID-19 is amplified by conditions such as heart disease and diabetes.

“A lot of these conditions are amenable to prevention,” she said. “It’s the absence of prevention that makes people not only vulnerable to getting COVID-19, but [not] recovering from it.”

Though states and communities have been at the front lines of dealing with COVID-19, Auerbach’s presentation also highlighted just how reliant they are on federal funds. Nearly half (48 percent) of the revenue for state health agencies comes from Washington, D.C., while state general funds provided about 25 percent of these agencies’ budgets.
And at both the state and federal levels, Auerbach said, public investments in public health took a hit during the Great Recession and never really recovered.

For example, in fiscal year 2006, the U.S. Centers for Disease Control and Prevention granted $766 million for public health emergency preparedness; by FY 2019, the amount

had dropped to $617 million. During that same period, grant funding for the nationwide Hospital Preparedness Program (which aims to improve patient outcomes during emergencies and disasters) was cut in half.

States make different levels of investment in public health on a per capita basis, but overall, it is lower now than before the 2008 recession. One result is 10,000 fewer workers in state public health systems and an even greater reduction of this workforce at the local level (a decline of 33,000 full-time-equivalent employees over the past 12 years).

“That has made it more difficult to respond, and to respond quickly, when a major emergency like the pandemic occurs,” Auerbach said, citing limited capacity for testing and contact tracing, outdated data systems, and ineffective communication systems as among the consequences. “The lesson is that we need to make sure we shore up our public health departments and our funding, and not just after an emergency happens.”

Dr. Safdar told lawmakers that there inevitably will be another public health emergency or disaster that will confront states. The question is how prepared they will be to deal with it. One part of preparedness is trying to address the prevalence of underlying, chronic conditions in individuals. A second component is strengthening the internal capacity of public health systems and improving the preparedness of those systems. For example, the first two stages of a pandemic are “investigation” and “recognition.” What states, and the country, need during these phases is a sophisticated data-system that provides access to information on what is happening in the epicenter of the pandemic.

“This was a gap in our preparedness early on,” she said, “because it wasn’t always clear what the state of the pandemic was.”

According to Safdar, fixing this problem should be part of a four-pronged approach to improving public health preparedness, a “4 S Framework” developed by Harvard University professor Paul Taylor:

Some of her specific recommendations include building a reserve of public health workers and outlining in advance how treatments and vaccines will be allocated to the public.