For every dollar spent on flood mitigation, an average of $6 can be saved in post-disaster recovery costs, according to Federal Emergency Management Agency research. That figure might increasingly drive public policy and investments in the Midwest, considering the historically destructive year of flooding last year along the Mississippi River (an estimated $6.2 billion in damages) as well as longer-term weather patterns. 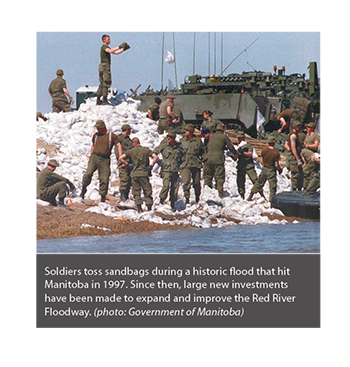 In Manitoba, Minister of Economic Development Ralph Eichler puts the cost savings of a 52-year-old flood-mitigation measure in his province — the Red River Floodway — at more than $40 billion. Initially completed in 1968 to protect the city of Winnipeg, the project at the time “was one of the largest earth-moving projects on the planet,” Eichler says. It created a floodway channel around the city.
In 1970, an additional diversion was built, and after another severe flood in 1997, construction commenced to double capacity of the mitigation project. The Red River Floodway remains perhaps the most significant flood-protection measure in the Midwest.

There are many others, however.

Between 1993 and 2002, North Dakota’s Devils Lake tripled in size. The result was the flooding of homes, destruction of towns and farmland, and hundreds of millions of dollars in costs. Since the lake began its rise, more than $1 billion has been spent on various infrastructure projects, culminating with the construction of two pumps to lower water levels.

Built by the state of North Dakota, the Devils Lake Outlet has been operating for more than a decade and “has reduced the lake’s depth by about 5 feet, bringing 50,000 acres of farmland back into production,” Sen. Jim Dotzenrod, vice chair of The Council of State Governments’ Midwestern Legislative Conference Agriculture & Natural Resources Committee, said during a committee-led webinar this fall.

“Discussion [now] centers around whether the state should continue to operate the two pumps … or whether the pumps should remain idle.”

Farmers want lower water because it exposes more agricultural land; people who fish the lake want higher water levels. Another Red River flood-mitigation project has also had its share of controversy: The U.S. Army Corps of Engineers’ $2.75 billion Fargo-Moorhead Area Diversion. It is currently the biggest and most ambitious infrastructure project in America, with plans to construct in-town levees and floodwalls, upstream storage, and a 30-mile diversion channel.

Though Fargo, N.D., and Moorhead, Minn., have experienced flooding since the cities were founded, the need for such a project has intensified since 2009, a period in which some of the highest Red River crests have occurred.

The Corps-led project has spurred multiple state and federal lawsuits, though in October, a settlement was reached between the Metro Flood Diversion Authority and several upstream entities. A unique mix of project partners and funding sources is being used for the Fargo-Moorhead Area Diversion.

The Metro Flood Diversion Authority, a specially created local government entity, is primarily responsible for building the channel. It plans to hire a private consortium to do the work. Unlike most public-private partnerships (a toll road, for example), though, the river diversion project won’t have a stream of revenue, so local voters had to approve a sales tax hike.

Meanwhile, smaller-scale initiatives are newly available to the Midwest’s farmers and communities. For example, thousands of acres of farmland are expected to be taken out of production under the U.S. Department of Agriculture’s Emergency Watershed Protection Program. In addition, FEMA’s new Building Resilient Infrastructure and Communities program is offering grants to state and local governments.