As if the pandemic, trade wars and drought weren’t making 2020 tough enough on Midwest agriculture, a derecho swept from South Dakota to Ohio in August, traveling 770 miles in 14 hours. Winds in excess of 100 mph destroyed millions of acres of cropland and wiped out buildings and grain storage facilities.

“Derecho events are a very Midwestern phenomenon,” according to Scott Collis, an
Argonne National Laboratory atmospheric scientist. So much so, in fact, that they were first discovered and named in Iowa, in 1888, to describe an organized thunderstorm that can generate straight-line winds, hail, torrential rain and tornadoes. 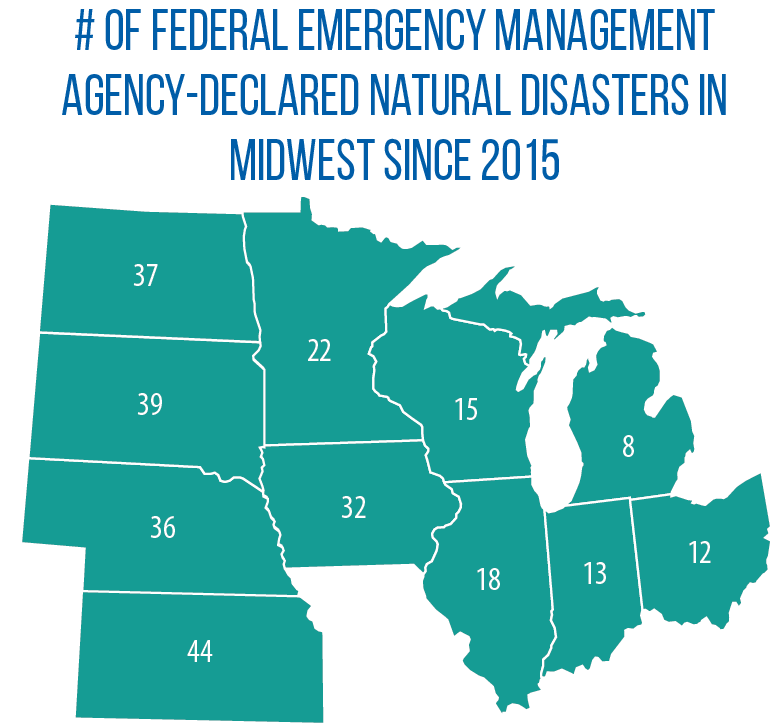 Collis was one of three featured speakers during a September webinar of the Midwestern Legislative Conference Agriculture & Natural Resources Committee on how states can help rural communities recover from natural disasters.

“The derecho that traveled across the Midwest in August really highlighted
how damaging these events can be to agriculture,” Collis said, adding that the
region should “expect these storms to be more common [in the future].”

In Iowa, the most intense path of the storm plowed through 4 million acres of
corn (25 percent of the state’s total corn crop) and 2.5 million acres of soybeans.
“For the most part, beans stood back up, but corn is still lying flat,” Iowa Secretary
of Agriculture Mike Naig said on the September webinar.

According to Naig, the effects of storm events such as this one underscore the
importance of collaborations among government officials, farmers and farm
groups, and agribusinesses.

The state of Iowa is now working with the U.S. Department of Agriculture to
ensure that different insurance adjusters are consistent in how they assess damage
in the fields. Officials are also seeking federal assistance for the damage done
to grain elevators. Meanwhile, the state is using dollars from conservation programs to help with cover crops and replace wrecked windbreaks.

Another component to rural disaster recovery is a state’s university system and
extension services, including the role these institutions play in disseminating scientific and other information. For example, the University of Minnesota has created customizable forms for farmers to establish contingency plans for their operations.

Naig adds that in Iowa and other states, universities and extension services
coordinate assistance for farmers experiencing “mental and financial
stress.”

Natural disasters are becoming more frequent and severe; for agriculture, these trends reaffirm the importance of crop and property insurance. Insurance alone doesn’t ensure recovery.
States are expected to help financially and to assist with mitigation. When it comes to disaster-related spending, states should carefully track expenditures across all agencies and disaster phases Anne Stauffer of The Pew Charitable Trusts said.

The state of Ohio is doing just that through a joint system created by budget and emergency management officials. Their goal: Have the data needed to carefully review budget expenditures, and then adjust policies and budget outlays when needed.

Stauffer also recommended that states invest more in disaster mitigation. “Every
mitigation dollar spent has been shown to save an average of $6 in post-disaster
recovery costs,” she said.

The importance of federal aid also cannot be overlooked. This assistance has long been relied on by states, communities and individuals. But as disaster-related
costs rise nationwide, will state and local communities have to take on greater
financial responsibilities?

The Federal Emergency Management Agency has proposed raising the per
capita indicator, the damage threshold that determines whether a disaster warrants federal funding. In addition, disaster-related grants based on population can put rural, sparsely populated communities at a disadvantage. These same
communities are also less likely to have disaster-recovery expertise.

Rural communities, then, must continue to rely on each other. Recovery
is contingent on relationships among individuals, government institutions and nonprofit groups.