Some of nation's largest gaps are in Midwest

During the 2015-’16 school year, students across the country lost a total of 11 million instructional days due to out-of-school suspensions.

Dig deeper into the federal data, as a pair of education- and civil rights-focused groups did, and some more eye-popping numbers are revealed.

“People understand chronic absenteeism and why that is a problem; this should be thought of in the 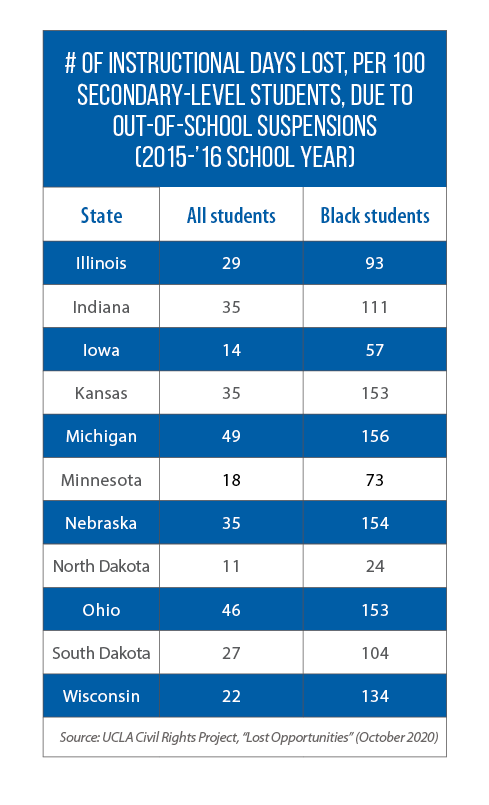 same way,” says Daniel Losen, director of the Center for Civil Rights Remedies at the UCLA Civil Rights Project. “The thing that schools can control the most when it comes to chronic absenteeism is whether they decide the kids can be there.”

Losen served as lead researcher of the October 2020 report, “Lost Opportunities,” which was done in collaboration with the Learning Policy Institute. The study recommends a series of state-level policy changes, some of which have already begun to be implemented in the Midwest.

In Ohio, starting next school year, districts cannot suspend or expel students in kindergarten through third grade. Also under HB 318, signed into law in 2018, the state is incorporating a Positive Behavior Intervention and Supports (PBIS) model across the entirety of its education system.

This model uses evidence-based strategies to identify students at risk of developing serious behavioral problems and provides intensive in-school supports. A central goal of PBIS is to reduce the prevalence of out-of-school suspensions and expulsions.

Under the 2018 Ohio law, this model must be implemented in every school, taught in teacher preparation programs and included as professional development for instructors.

In Michigan, schools must now consider a series of factors before suspending or expelling students (severity of the offense, age, disciplinary history and disability status), while in Illinois, schools must exhaust all non-exclusionary methods of discipline before removing a student from school. These laws in Michigan and Illinois took effect after the 2015-’16 school year.

Losen also suggests that states include out-of-school suspensions as part of their accountability plans for schools.

Under the Every Student Succeeds Act, states such as Illinois, Indiana, Michigan, Minnesota, Nebraska, Ohio, South Dakota and Wisconsin have included attendance rates or chronic absenteeism as nonacademic indicators of school quality. This is because poor attendance correlates with students falling behind or dropping out of school.

The inclusion of suspensions as a measure of quality would trigger additional state-level supports and interventions for schools with high rates of lost instructional days, Losen says.