Two years ago, in a resolution passed at the Midwestern Legislative Conference Annual Meeting, the region’s state legislators urged their federal counterparts to support an initiative that connects farmers and ranchers to mental health services. That policy wish was granted in the 2018 farm bill, which included funding for the Farm and Ranch Stress Assistance Network. Now the Midwest is poised to work together on delivering these services through a new 12-state initiative devoted to the mental wellness of agricultural producers in the region. 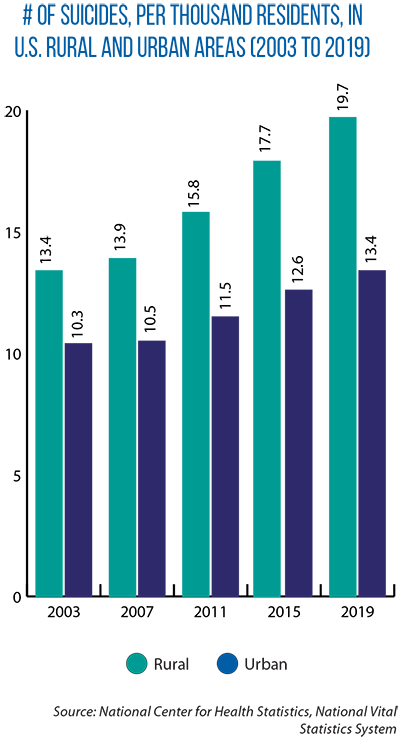 “It’s beyond time we turn our attention back to those working on our state’s farms,” says Wisconsin Sen. Joan Ballweg, who sponsored that MLC resolution in 2018.

Stress in agriculture has been particularly high in recent years, the result of low commodity prices, other market uncertainties and a pandemic. Suicide rates among farmers and ranchers are more than three times higher than those in the general population, and in the MLC’s 11-state Midwest, 450 farmers killed themselves between 2014 and 2018, according to University of Iowa research. (The actual total may even be higher because not every state provided full suicide data for every year.)

University of Iowa researchers also found that suicide rates among farmers have increased by 40 percent in less than two decades. Part of the problem, experts say, is that farmers are hard to reach. For example, they live in areas sometimes far from mental health professionals: While urban counties average 10 psychiatrists per 100,000 people, rural counties have three, a 2018 University of Michigan study found.

The use of telephone hot lines, telehealth services and state crisis centers has helped connect rural residents to mental health supports, but federal legislation supporting these efforts had been left unfunded — until the most recent farm bill.

The regionwide network in the Midwest is receiving $7.2 million in federal support and being led by the University of Illinois Extension.

“There were substantial investments for farmer mental health in the 1980s, only to see that support fall away as suicide rates receded,” says Sen. Ballweg, national chair of The Council of State Governments. “My hope is that we will learn from that mistake and build in sustainable access points to care that will become part of everyday life on the farm.”
She adds that for mental health professionals to be most effective, they will need situational training and to understand “what it takes to be a farmer in the first place.”

Every state in the region will be collaborating on farmers’ mental well-being through the new network, and participants have already built a central clearinghouse to improve access to crisis hot lines as well as sources of clinical care, intervention and training.

Existing programs also will receive funding to continue and expand services. Wisconsin, for instance, has a counseling voucher program that allows farmers and their families to receive services at no cost to them. It is going to create a “best practices” document for other states interested in the program.

Many of Wisconsin’s services for agriculture producers are run through the Farm Center, a part of the state Department of Agriculture, Trade and Protection. The center plans to partner with the University of Wisconsin’s extension services to create farmer focus groups and provide more training for mental health professionals.

Other initiatives in the Midwest include: