Passage and enactment of the American Relief Act of 2021 in mid-March opened the spigot of federal COVID-19
pandemic relief funding to states and local governments, $61.7 billion of
which is heading to the Midwest (see accompanying table).

According to an analysis by Federal Funds Information for States, a total 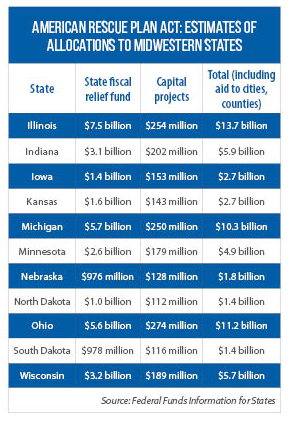 These federal dollars can be used to pay for pandemic-related
expenses and costs incurred through Dec. 31, 2024. That includes aid to
households, small businesses, nonprofits and impacted industries such
as hospitality, tourism and travel. Other allowable uses include investing
in certain infrastructure (broadband and water/sewer systems) and
providing “premium pay” to essential workers. Funds may not be used to
make pension payments or reduce taxes.

Each state’s share is based on a two-part allocation formula: 1) $25.5
billion equally divided among the 50 states, and 2) another $169
billion going to the states in varying amounts, based on their share of
unemployed workers during the last three months of 2020. The governors
of Indiana, Iowa, Kansas, Nebraska, North Dakota, Ohio and South
Dakota opposed this second allocation method, saying the distributions
should have been based on population.

Also in the new law for states: $10 billion for coronavirus capital projects that enable “work, education, and health
monitoring, including remote options, in response to the public health emergency.” Each state’s allocation is based in part on factors such as its share of population, of rural residents, and of the number of lower-income households.