As longtime state Sen. Lee Schoenbeck describes it, South Dakota needed to find a way of “filling the cup” for his home state’s lower-income high school graduates as they looked at college options.

“Things like grants, other scholarships, loans and work studies don’t always get there,” he says, “and other states were filling it when we weren’t.” “That’s caused us to lose a lot of our blue-collar kids.”

This turned out to be the ideal year to seek a policy remedy. With passage of SB 171, legislators agreed to put $50 million toward a $200 million endowment for a needs-based Freedom Scholarship. The other $150 million is coming from private donors.

“Usually we have $5 million to $15 million to spend in special appropriations,” explains Schoenbeck, president pro tempore of the South Dakota Senate. “The idea that we had $50 million, and it was legislator-initiated, was unique.”

In South Dakota, a special appropriation is the spending of one-time money and requires approval by super-majorities in both legislative chambers. According to Schoenbeck, this year’s special appropriation of $50 million marks a record for South Dakota and reflects the state’s strong fiscal standing, the result of factors such as an influx of federal dollars and economic growth (the state’s GDP grew by 9.9 percent between the final two quarters of 2020, highest rate in the nation).

Under SB 171, investment income for the Freedom Scholarship will go to students via the state’s colleges and universities, both private and public. To participate, these postsecondary schools must have a nonprofit entity to receive and award scholarship funds.

An existing foundation will make investment decisions for the endowment, and a five-member, governor-appointed board will oversee the scholarship program.

Students must be residents of the state, maintain a grade-point average of 2.5 and graduate within five years. They also must agree to live and work in South Dakota for three years after their graduation; if they don’t fulfill this pledge, the scholarship turns into an interest-bearing loan. 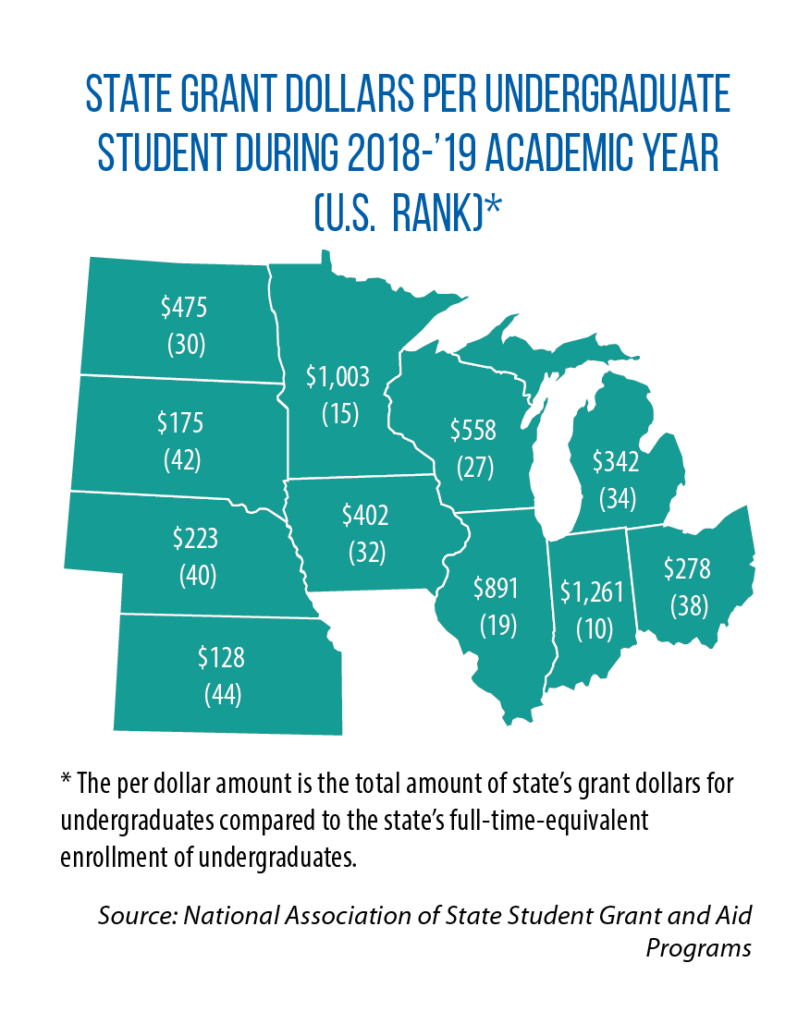 “Our belief is if they stay for three years, we’ve got them for a lifetime,” Schoenbeck says.

The same three-year work/live stipulation is part of an existing Build Scholarship, which supports residents and nonresidents who are attending South Dakota’s technical colleges and seeking degrees in high-demand fields such as agriculture, automotive, health care and information technology.

In the 2018-’19 academic year, U.S. states awarded about $14.1 billion in state-funded student financial aid: about 64 percent of it in the form of needs-based grant aid, 23 percent in merit-based aid and 13 percent in nongrant aid, according to the National Association of State Student Grant and Aid Programs.

As part of its 50-state survey, the association also looked at differences in the breadth of state-funded award programs. For example, how much is a state awarding in grants compared to the state’s full-time-equivalent enrollment of undergraduates? In the Midwest, the amount was as high as $1,261 in Indiana and as low as $128 in Kansas (see map).