To make the case for policies that promote greater economic inclusion, one place to start is with the data.

And researchers at the Federal Reserve have recently made some powerful claims about the link between closing racial, ethnic and gender gaps and growing the broader economy. They looked at 15 years of U.S. Census Bureau statistics on disparities in income, number of hours worked, employment-to-population ratios and educational attainment.

Their conclusion: A closing of gaps in these areas would have boosted annual, overall GDP during this time in every Midwestern state, anywhere from $4.0 billion in South Dakota to $120 billion in Illinois. 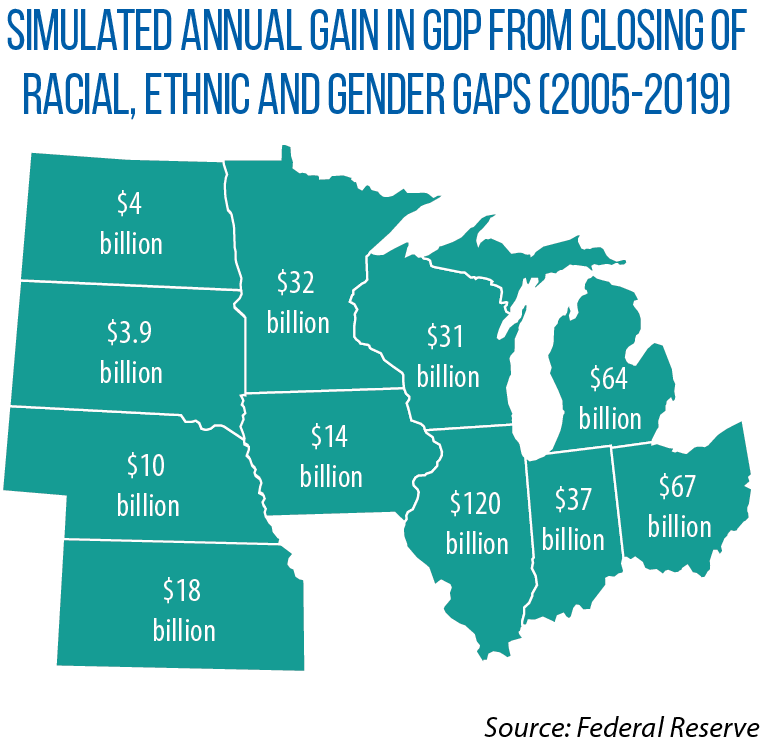 Tawanna Black, a featured speaker at the Midwestern Legislative Conference Annual Meeting, highlighted those findings during a presentation that urged lawmakers to think about addressing inequality across all policy areas.

The challenges of creating an equitable economy pre-date us, but we are in a position to make things better, Black said, adding that one tool to help make informed policymaking decisions is the use of racial-equity notes for proposed legislation.

Similar in intent to fiscal notes (already commonly used in legislatures) or environmental impact statements, these notes would seek to anticipate a bill’s potential impact on minority communities.

Iowa passed the nation’s first law on racial-impact statements in 2008 (HF 2393), requiring corrections-related measures to include notes on their impact to minority communities. This year, Minnesota legislators considered but didn’t advance HF 2297/SF 2081, which would have required the Legislative Budget Office to prepare such notes upon request by a committee chair or ranking member.

According to Black, founder and CEO of the Minnesota-based Center for Inclusion, state lawmakers can promote policies to improve access to jobs (education and transportation), human capital (increasing the number of minority-owned businesses, elected officials and corporate executive leadership) and opportunity (reducing wage and employment gaps).

Everyone, she added, should also be asking themselves hard questions: Are your business relationships equitable? Who taught you about race? Who taught them?

Referencing historian Ronald C. White’s discussion of Abraham Lincoln’s wisdom, as seen in the president’s private notes (a session immediately preceding hers), she asked, “What will cause you to take those private notes and make them not so private?”