States’ unexpectedly strong revenue growth since the COVID-19 pandemic allowed for a policy trend that few fiscal analysts would have predicted at the start of this year — cuts in individual and corporate income taxes. “In a lot of states, some of those plans may have been in the works for a while, but that growth provided the opportunity to get them done,” says Katherine Loughead, senior policy analyst for the Tax Foundation. 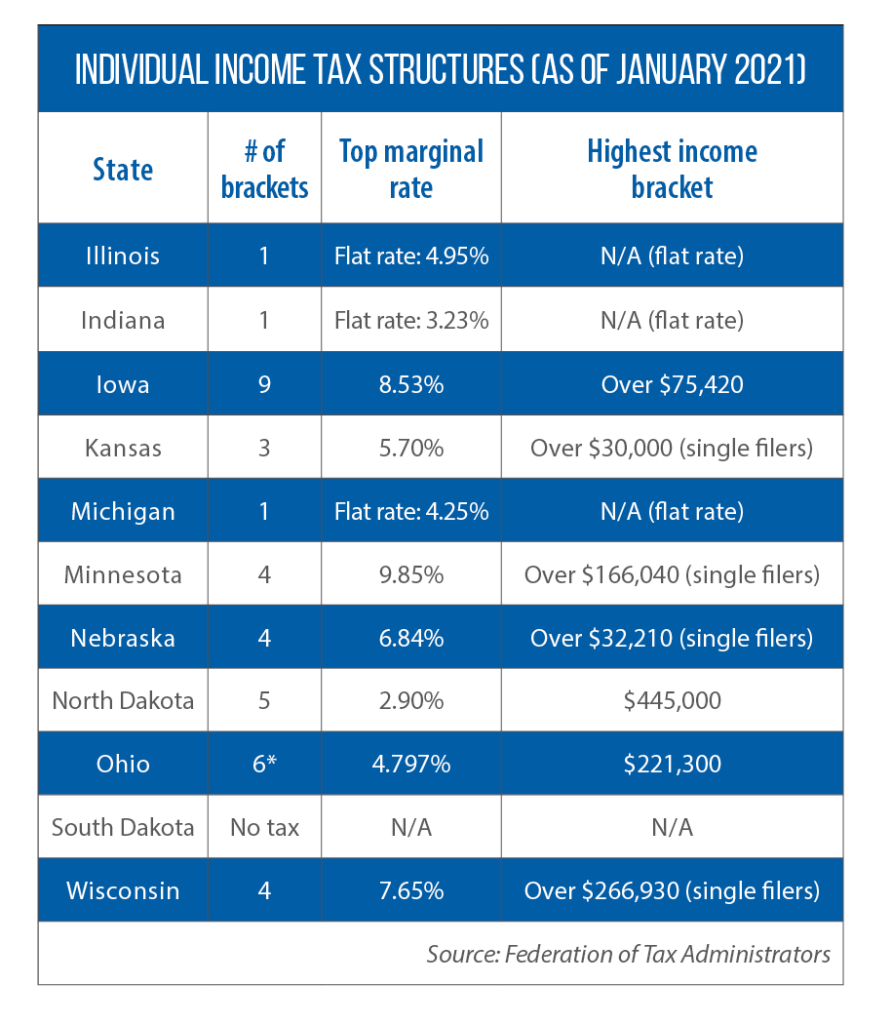 As of July, four of the 11 U.S. states to enact these tax cuts in 2021 were in the Midwest: Iowa, Ohio and Wisconsin (reductions in the individual income tax) and Nebraska (corporate income tax). Loughead co-authored a July study on these changes, and one commonality among all 11 states was a jump in general fund revenues between fiscal years 2019 and 2021: increases of 9 percent in Wisconsin, 13 percent in Iowa and Ohio, and 23 percent in Nebraska.

Three years ago, Iowa legislators passed a measure tying future tax cuts to specific revenue targets. As of March, growth was slightly below target, but this year’s SF 619 removed those triggers. As a result, starting in 2023, the number of tax brackets in Iowa will fall from nine to four and the top marginal rate from 8.53 percent to 6.5 percent. For tax year 2021, Iowa’s top rate applies to incomes of $75,420 or more.

Wisconsin’s top marginal rate of 7.65 percent will stay the same, and its four tax brackets remain in place. Its new cuts (AB 68) are targeted for incomes between $24,250 and $266,930 for single filers and between $32,330 and $355,910 for joint filers. The rate for these income levels is falling from 6.27 percent to 5.3 percent. Over the next two years, individual income tax collections will fall by $2 billion due to the changes, according to a Wisconsin Legislative Fiscal Bureau analysis.

Nebraska’s tax rates on individual income were left untouched this year, but the state’s top corporate rate (for incomes of $100,000 or more) is being reduced from 7.81 percent to 7.25 percent by 2023. LB 432 also includes language expressing “the intent of the Legislature” to drop the rate even further in 2024 and 2025.

According to Loughead, many of the changes were made possible by the influx of federal stimulus dollars, which helped to stabilize states’ income and sales tax revenues. Consumers continued to spend during the pandemic, and tended to do so more on items that most states tax (goods) vs. not tax (services).

Still, she warns that today’s uncertain economic conditions merit caution: “You want to make sure future tax cuts are sustainable.” Options for states wanting to make such reductions include providing for phase-in periods or creating triggers such as Iowa’s 2018 law.