Nearly a decade has now passed since the Iowa Legislature first adopted what became a series of laws derided as “ag gag” measures by opponents but as important safeguards for farms by proponents. A legal fight began soon after the passage of that first law in 2012. It continues today.

One of the latest developments: A U.S. Court of Appeals decision in August that says animal-rights groups do not have a First Amendment right to lie (by making false statements or using false pretenses) in order to gain access to a farm operation for the purposes of conducting undercover investigations. 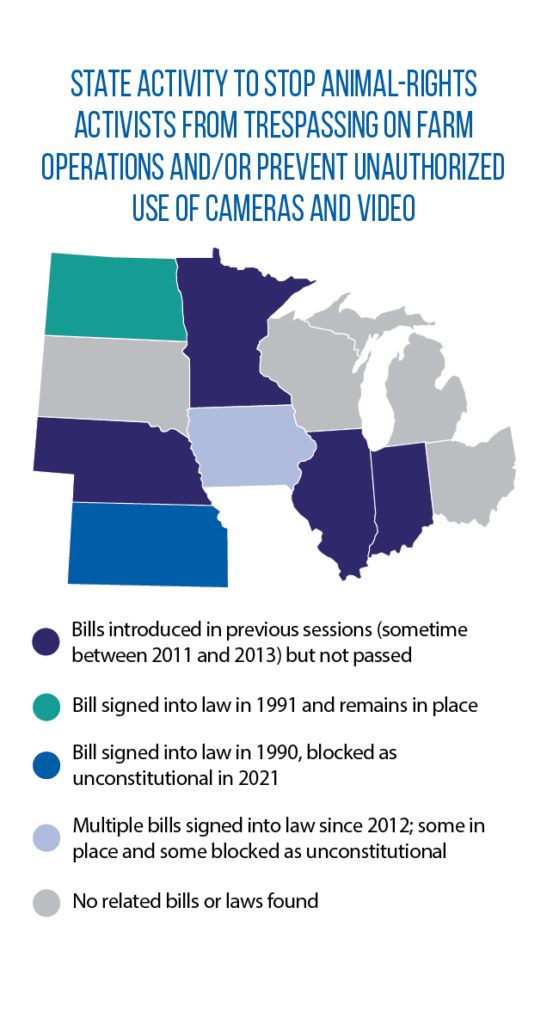 This decision of the Eighth Circuit overturned a previous U.S. District Court ruling against Iowa’s HF 431. Under this law, it is illegal to “obtain access to an agricultural production facility by false pretenses” and to make a “false statement or representation” in an employment application if the person intends to commit any unauthorized actions, such as videotaping, once hired.

On the “access” question, the Court of Appeals ruled that First Amendment protections do not extend to “lies associated with a legally cognizable harm — namely trespass to private property.” As a result, Iowa can charge activists with a crime for entering an agricultural facility “with an intent to commit an act not authorized by the owner.”

The three-judge panel did strike down provisions in the law dealing with employment applications. However, it left open the possibility that more narrowly tailored language (addressing only false statements explicitly made to get a job) could pass constitutional muster.

“This is a win for animal agriculture, providing recourse for farms,” says Iowa Sen. Annette Sweeney, a sponsor of HF 431 nine years ago. “The judges have also provided states with a way to limit lying on employment applications.”

Earlier this year, the Iowa Legislature passed HF 775, which makes it a misdemeanor to enter agricultural facilities without consent; to use a recording device when trespassing; or to take soil, water or samples from animals without permission. A second offense is punishable by up to five years in prison.

“Your private property is your property, and if someone comes on without your permission to take pictures and put them on the internet, then it is [a crime],” Rep. Jarad Klein said earlier this year during testimony on HF 775.

What constitutes trespassing of an agricultural production facility?

Two years ago, Iowa lawmakers added statutory language (SF 519) making it a crime to obtain access to or employment with an agricultural operation by use of deception with the intent to cause “physical or economic harm or other injury.” Late in 2019, a federal judge halted enforcement of the law. That preliminary injunction remains in place.

An Iowa law from 2020 (SF 2413) makes “food operation trespass” a crime — a misdemeanor for a first offense and a felony for subsequent offenses. It applies to individuals who trespass despite having been notified or requested by signs “to abstain from entering.”

Across the country, nine lawsuits have been filed challenging state laws such as Iowa’s. In August, the U.S. Appeals Court of the Tenth Circuit ruled that Kansas’ Farm Animal and Field Crop and Research Facilities Protection Act violated the First Amendment.

That 31-year-old law, one of the earliest of its kind passed by a U.S. state, banned certain actions by individuals whose intent was to “damage the [agricultural] enterprise.” For example, these individuals could not enter a facility or take video without consent by the owner.

But in its 2-1 decision, the federal court ruled that “even if deception used to obtain consent to enter is unprotected speech due to the entry upon private property, Kansas may not discriminate between speakers based on the unrelated issue of whether they intend to harm or help the enterprise.”

In Canada, Alberta, Manitoba and Ontario are among the provinces that have laws specific to trespassing on agricultural lands. Manitoba’s Bill 63 was passed earlier this year. It removes a requirement that an individual be warned, either verbally or in writing, before he or she can be charged with trespassing, even if land is not fully enclosed. The bill also reduces landowners’ legal liabilities if a trespasser gets hurt on their property.

“Farms are not only places of business; they are homes where children and families also reside,” Agriculture and Resource Development Minister Blaine Pedersen said earlier this year. “Trespassing can expose farms and food production facilities to biosecurity risks that could spread disease, and may cause injury and stress to farm animals.”