In early February, traffic in and out of Canada via the Ambassador Bridge came to a stop, marking the second such closure in the last two years.

The first time was because of COVID-19-related border closures by the U.S. and Canadian governments. This year, the cause was a series of blockades led by the so-called “Freedom Convoy,” individuals rallying against Canada’s vaccine requirements for truckers as well as some of the country’s pandemic-related regulations and restrictions.

In all, three border crossing were shut down: the Ambassador Bridge that connects Michigan (Detroit) and Ontario (Windsor); a land crossing in Manitoba (Emerson) and North Dakota (Pembina); and a land crossing in Alberta (Coutts) and Montana (Sweet Grass).

For every day of the blockade, Canadian officials estimate, more than $500 million in trade (Canadian dollars) between the two countries was disrupted (see map). According to The Detroit News, the highly integrated North American auto industry alone suffered losses of up to $988 million (U.S. dollars).

Beyond the auto industry, the blockades had a potentially large effect on employment in the Detroit-Windsor area. In health care alone, at least 1,500 Canadians work in Michigan. With staffs already stretched due to COVID-19, a prolonged closure could have been dangerous for hospitals in both countries.

Along the Manitoba-North Dakota border, businesses in Emerson and Pembina — as well as in Manitoba’s largest metropolitan area, Winnipeg — felt the effects of the blockade at that crossing. Commercial shipping companies couldn’t get through the border for about a week, and it took another week to get back to business as usual. Gas stations in Pembina saw such decreased business that employees feared furloughs.

According to Cpl. Julie Courchaine, a media relations officer with the Royal Canadian Mounted Police (RCMP) in Manitoba, agencies in both countries, including the U.S. Customs and Border Protection, worked together during the Emerson closure.

“[They] provided assistance to us throughout the duration of the blockade to ensure cross-country border traffic was accommodated at other land border crossings,” she says. 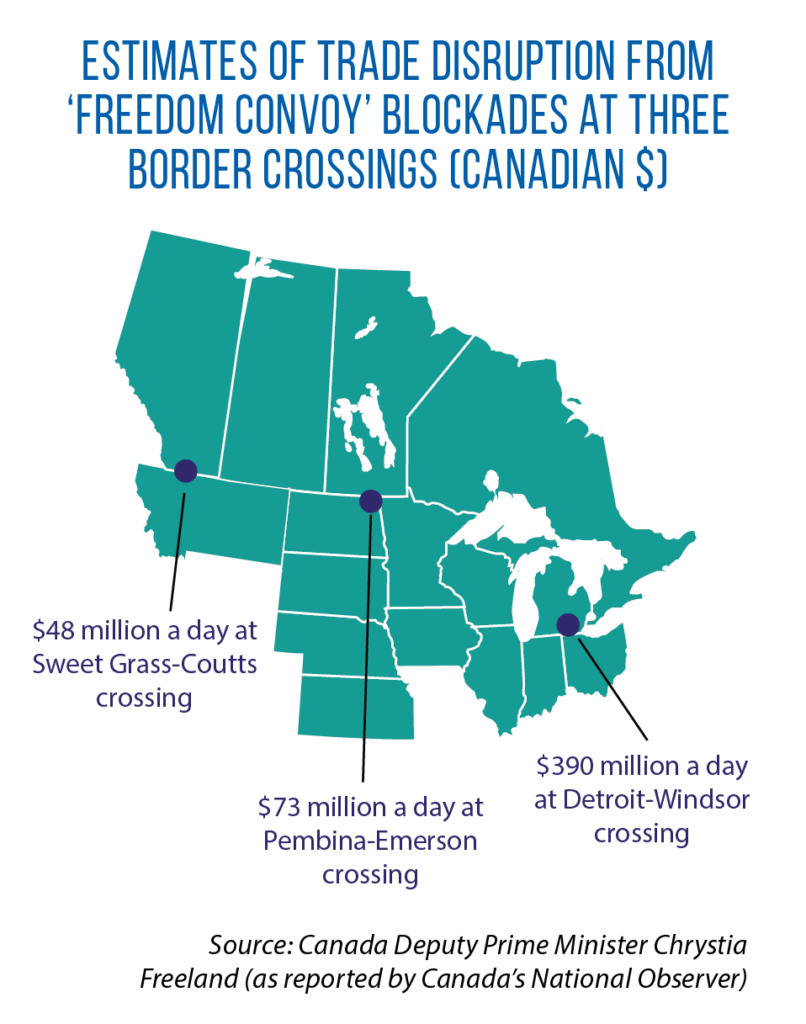 The Emerson border crossing was cleared on Feb. 16, and as part of the agreement between the RCMP and the protesters, no arrests were made and no tickets were issued.

In contrast, the RCMP made 13 arrests and seized a cache of weapons. In Windsor, more than 45 people were arrested.

“It is impossible to compare the protests that occurred in Ontario and Alberta with the situation in Manitoba,” Courchaine says. “The RCMP’s overall goal for any protest or demonstration is to utilize a measure approach.”

As the blockades began to wind down, people began looking forward and considering ways to prevent the negative effects of similar protests in the future.

One idea raised in a Detroit Free Press article at the time of the border shutdown was an alternative to land crossings, namely an eventual “highway in the sky” in which unmanned drones would carry cargo over the Detroit River.

Others see a possible solution already in the works, the Gordie Howe International Bridge.

Part of the reason it took so long and proved so difficult to clear the four-lane Ambassador Bridge is that it is privately owned. The city of Windsor had to get a court injunction to remove protesters from the bridge on the Canadian side, and the U.S. Department of Homeland Security had to get involved on the U.S. side.

The Gordie Howe International Bridge, on the other hand, will be publicly owned and run by the Windsor-Detroit Bridge Authority. It is scheduled to open in 2024. The six-lane bridge will create more options for cross-border trade and travel, have obvious government jurisdiction, and not be subject to the tolls of a single private owner.