What actions have states taken to improve care and treatment for people with rare diseases?

A former social worker, Illinois Rep. Lindsey LaPointe advocates for affordable and accessible health care in her legislative work. This year, she is sponsoring HB 3845, which would require Illinois insurance providers to cover medically necessary treatments for genetic, rare, unknown or unnamed, and unique conditions, including Ehlers-Danlos syndrome and altered drug metabolism.

Though this specific kind of law would be a first of its kind for the Midwest, several states have implemented laws that can improve insurance coverage for those with rare diseases.

The National Organization for Rare Diseases publishes an annual report card that evaluates how states serve people with rare diseases. The advocacy group focuses on these policy areas:

Step therapy has come under legislative scrutiny in recent years. Used by insurers to control health care costs, it sometimes requires patients to take one or more alternative medications before being allowed to access the drug prescribed by a provider. 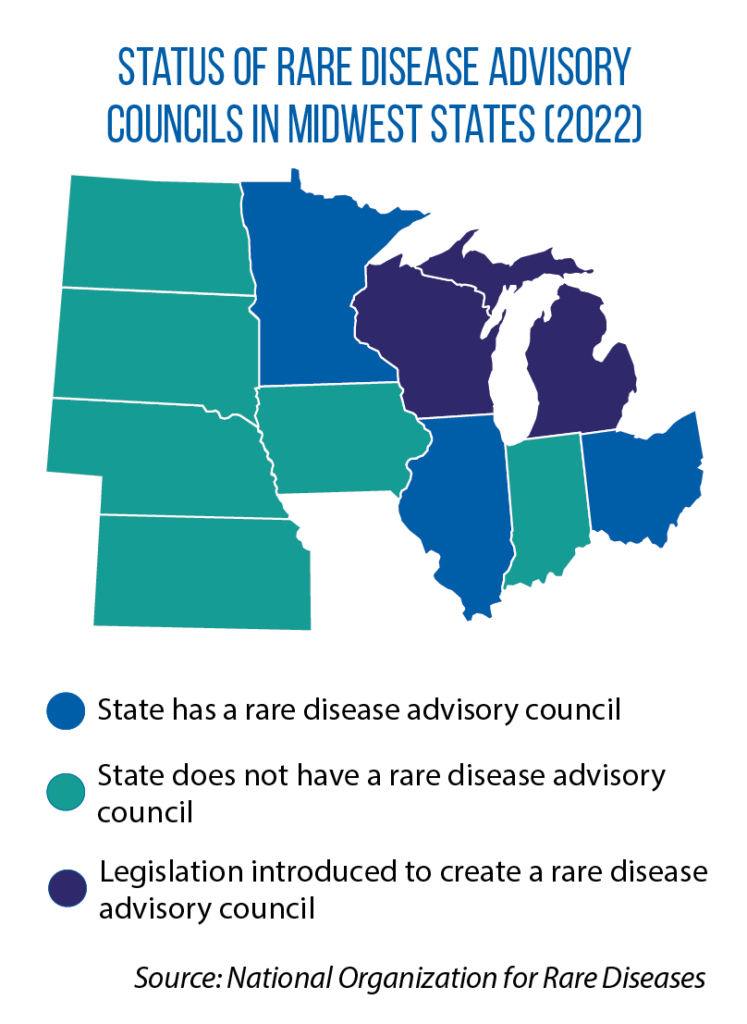 Rare-disease advocates have called for reforming the practice.

An Iowa law from 2017 (HF 233) allows an insured person to get an override exception when coverage of a prescription drug for treatment of a medical condition is restricted by a step-therapy protocol. This exception must be approved by a health carrier, health benefit plan or utilization review organization upon showing that specified circumstances apply. South Dakota (SB 155 of 2020) and Wisconsin (SB 26 of 2019) are among the other Midwestern states that have adopted regulations on step therapy in recent years.

For rare diseases such as phenylketonuria, or PKU, medical nutrition — food formulated under the supervision of a physician and intended for dietary management of a disease — is required to prevent disability, allow for proper growth and provide correct caloric intake.

However, insurance does not often cover medical nutrition because the U.S. Food and Drug Administration does not regulate it as a drug and insurers often view it as an elective treatment.

Some states, though, have rules to ensure that medical nutrition is covered by insurance.

Much work remains to identify and address barriers to proper treatment and care for those living with rare diseases. One overarching strategy for states is to form advisory councils or commissions that develop ideas for new laws or regulatory reforms based on the most up-to-date information and science. Several states — including Illinois, Minnesota, and Ohio — have formed these councils. As of March, bills to create rare-disease advisory councils were pending in Michigan (HB 4654) and Wisconsin (SB 689).