Do states in the Midwest provide financial support for students to attend private K-12 schools?

According to EdChoice, a group that tracks and advocates for “school choice” laws, seven Midwestern states were providing financial support of some kind as of the beginning of this year. (An eighth state, Minnesota, makes tax credits and exemptions available that cover the education-related expenses of all families, regardless of whether they are attending a public or private school.)

In this region, the most common type of financial support comes in an indirect way: the state offers a tax credit for donations to nonprofit groups that provide scholarships for students to attend private schools. 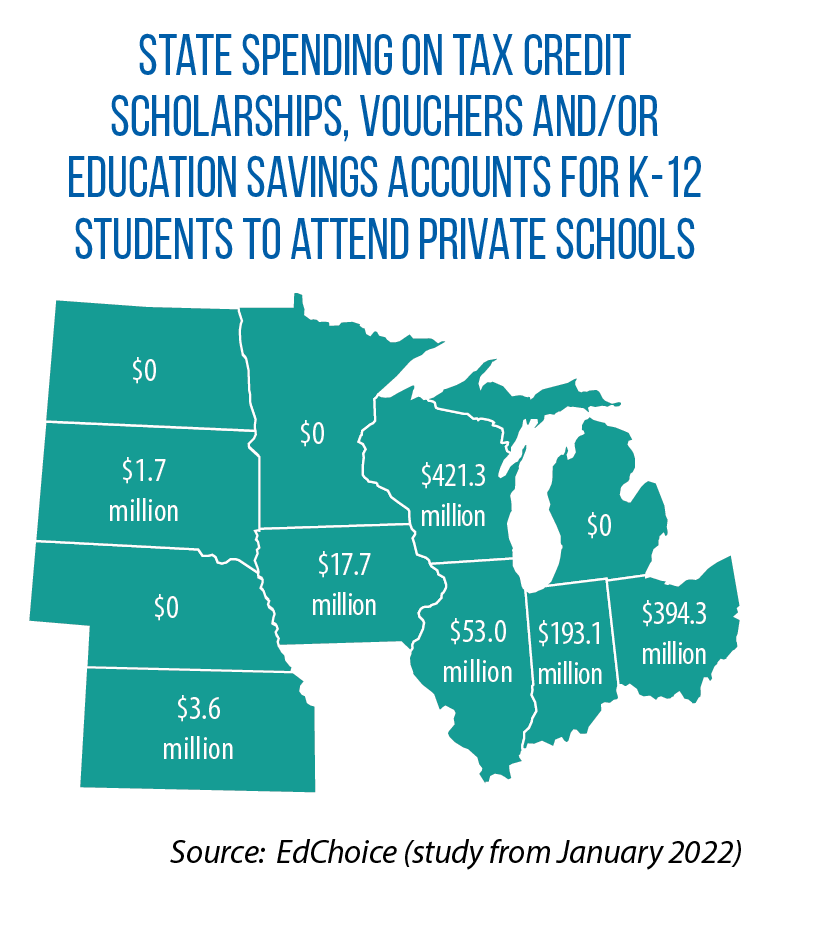 Operational in Illinois, Indiana, Iowa, Kansas, Ohio and South Dakota, these programs can vary widely in scope, based on several factors.

• Statutory limit on total amount of tax credits available — These caps range from a high of $75 million in Illinois to a low of $2 million in South Dakota, where the program is only for insurance companies, according to a 2021 analysis of programs by the Education Commission of the States. (South Dakota does not have an individual income tax.)

• Rules on eligibility — States typically have income-based limits on which families can quality for a scholarship. Until last year, Kansas also limited eligibility to low-income students  attending one of the state’s 100 lowest-performing schools. HB 2134, signed into law in 2021, now makes scholarships available to families with students who qualify for free or reduced school lunches — regardless of the public school they attend.

• Amount of the credit and scholarship — For individuals who donate, the tax credit is based on a percentage of the contribution — for example, 75 percent in Illinois and 65 percent in Iowa, according to last year’s ECS study. The scholarship amount for each student often is either capped at a certain dollar amount ($8,000 in Kansas, for example) or based on a state’s per-pupil spending.

States such as Indiana, Ohio and Wisconsin also offer tax credits or deductions specifically for the families of students who attend non-public schools, according to EdChoice.

Another policy employed by states: Provide tuition vouchers for families to send their children to private schools. Public funds pay for these voucher programs (for example, some money for a local school district may be redirected for private-school vouchers).

Last year, Indiana lawmakers (HB 1001) increased eligibility for vouchers under the state’s Choice Scholarship Program. Now, students living in households with incomes of up to 300 percent of the federal poverty level can qualify; the cap had been 150 percent. Additionally, the amount of scholarship money to attend a private school is now equal to 90 percent of the per-pupil funding level that is provided to the student’s public school. (Previously, the amount varied depending on the family’s income level; it was usually less than 90 percent.)

That same Indiana measure also established education savings accounts for the families of students with disabilities. Money from the accounts can be used to pay for specific therapies or classes or to attend private schools; it will come from a portion of the state dollars that go to the student’s local public school.