The U.S. Supreme Court’s late June decision overturning Roe v. Wade triggered an electoral earthquake in Kansas, a new law in Indiana and may have opened myriad future constitutional questions about how states interact with each other.

Kansas voters on Aug. 2 decisively defeated a proposed constitutional amendment which would have specified the state’s constitution does not protect abortion access.

As of August in the Midwest, abortion access is:

Every state that has banned or sharply restricted abortion makes an exception for the life of the mother. Indiana and North Dakota also allow abortions in cases of rape or incest; Indiana also allows it for fatal fetal anomalies. In states where abortion remains legal, the procedure is subject to various restrictions and/or mandates (see chart).

And except for Illinois and Minnesota, all Midwestern states where abortion is legal require parental consent or notice for minors seeking the procedure.

Those laws, however, govern what takes place within their states’ borders. No Midwestern legislature has considered criminalizing traveling out of state for abortion services, but Missouri’s did earlier this year. While SB 1202 did not advance, it raised questions about whether such a law could be constitutional.

A draft paper, “The New Abortion Battleground,” scheduled for publication in 2023 in the Columbia Law Review, predicts such legislation and ensuing litigation are probable as states wrestle with the Dobbs decision, and the availability of telemedicine and abortion-inducing medications.

“Given the underdeveloped and contested jurisprudence, the competing fundamental constitutional principles involved, and the complex web of factual scenarios that could possibly arise, the post-Roe judiciary will soon be mired in interjurisdictional complexities that will make the workability of the previous era look simple in comparison,” the paper states. 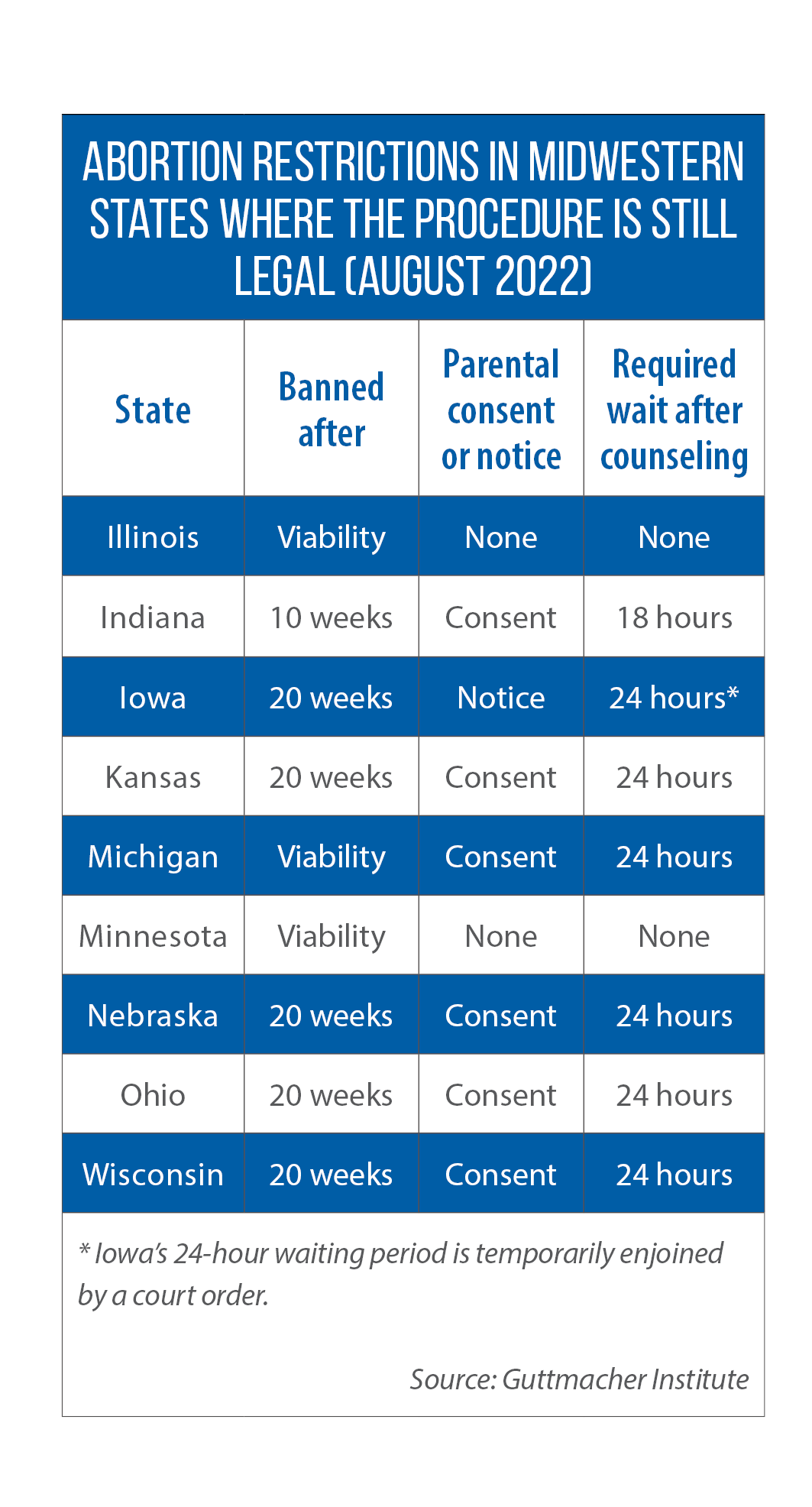 A proposed amendment would have specified that the constitution does not provide a right to abortion, and undone a 2019 ruling by the state Supreme Court that the document does. Voters in the Aug. 2 primary election defeated the proposal 59 percent to 41 percent, leaving abortion legal (though subject to restrictions).

Michigan voters may get the next chance to constitutionally enshrine abortion access. A citizen-initiated amendment, the “Michigan Right to Reproductive Freedom Initiative,” would add new language that “every individual has a fundamental right to reproductive freedom” that “shall not be infringed upon unless justified by a compelling state interest achieved by the least restrictive means.”

In late July, organizers said they had turned in 753,759 signatures to the Michigan secretary of state for verification (425,059 valid signatures are required to get an initiative on the ballot). If approved by voters in the Nov. 8 general election, it would take effect 45 days after the election.

Iowa legislators in 2021 passed a proposed amendment declaring the state’s Constitution does not protect abortion access. That came in reaction to a 2018 Iowa Supreme Court decision that abortion is constitutionally protected.

But in June, the court reversed itself to undo that protection, and also reversed a lower court’s decision invalidating a 2020 law requiring a 24-hour waiting period.

Supreme courts in Illinois and Minnesota have also ruled that abortion access is protected by their respective state constitutions.

As reported by the Associated Press, the law bans abortions, with exceptions for cases of rape and incest; to protect the life and physical health of the mother; or if the fetus is diagnosed with a lethal anomaly.

Abortions may be performed only in hospitals or outpatient centers owned by hospitals, meaning all abortion clinics will lose their licenses.

Nebraska Gov. Pete Ricketts in mid-August canceled plans to call a special session of the Unicameral Legislature to consider tighter restrictions on abortion after falling three votes short of a filibuster-proof majority.

In contrast, Illinois legislators in 2021 passed the Reproductive Health Act, which became law in December of that year. The law makes abortion access a “fundamental right”; eliminated felony penalties for doctors who perform abortions; and removed waiting periods and a requirement that a married woman get consent from her husband. The law also states a “fertilized egg, embryo or fetus does not have independent rights.” 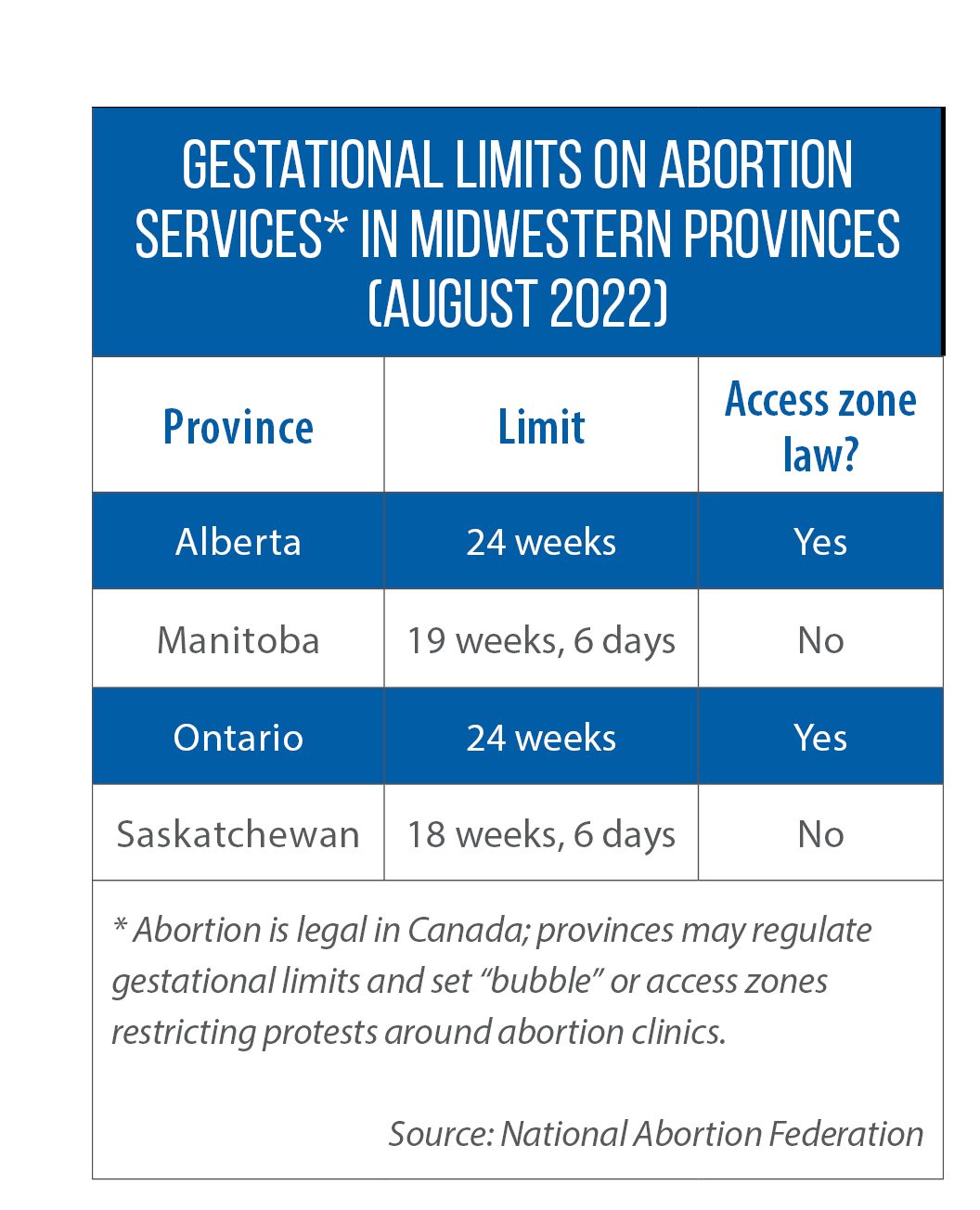 In Canada, abortion is legal, but access varies among the provinces, which can regulate or restrict access based on gestational limits and set “bubble” or access boundaries around abortion clinics in which protests are banned (see table)

Abortion was illegal until a 1969 law legalized therapeutic abortions in cases where a panel of doctors agreed it was necessary. That stood until the Canadian Supreme Court ruled in 1988 that the law violated Section 7 of the Canadian Charter of Rights and Freedoms.