In a year that ALS took the life of a longtime colleague, Minnesota legislators make historic investment in research, caregiver support

Minnesota earlier this year made the largest single state investment into ALS research — $20 million over the next three fiscal years — under legislation sponsored by Senate President Pro Tem David Tomassoni, who died last month of complications from the neurodegenerative disease. 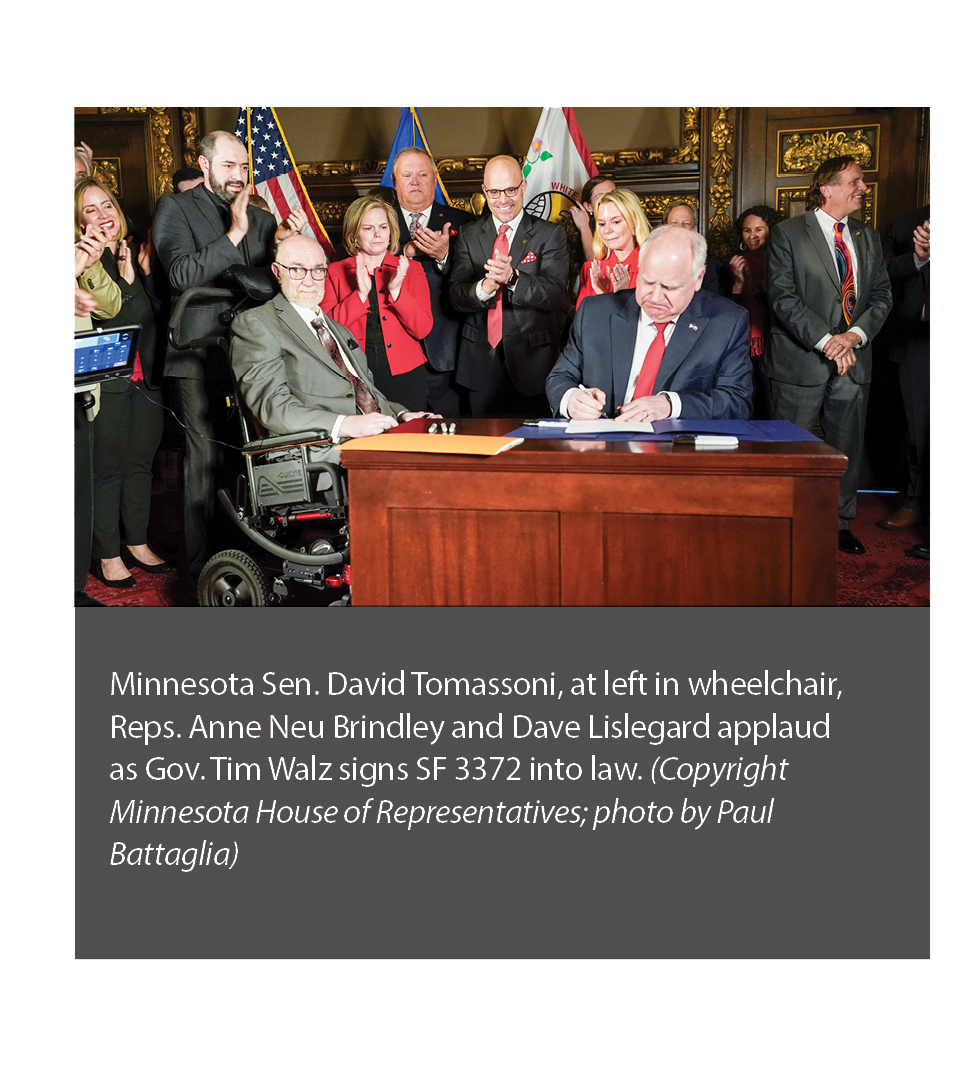 SF 3372 authorizes $20 million to be allocated in fiscal year 2023 for grants to Minnesota-based research facilities, universities and health systems for “clinical and translational” research on ALS — research on people via surveys or clinical trials, or into connecting the findings in different areas as a way to more effectively advance from discovery to application.

Another $5 million is slated for caregiver support programs with ALS-specific respite care services.

“Watching him champion this, knowing full well he would not benefit from it … in politics it’s connect the dots to tell a story to influence the outcome,” says Minnesota Rep. Dave Lislegard, who agreed to sponsor SF 3372’s companion bill in the House (HF 3603).

“To watch him go through this, it’s a true testament to the kind of champion he was,” he says.

House Deputy Minority Leader Anne Neu Brindley, for whom the law is also personal — her husband, Jon, died from ALS in 2016, one year before she joined the Legislature in a special election — agrees.

“He was the driver. We all watched what happened to him in the course of just over a year,” says Neu Brindley, whose amendment to HF 3603 added the money for caregiver support.

‘The champion he was’

Tomassoni, who played professional hockey in Italy for 16 years (and skated for Italy’s 1984 Olympic team) before winning a Minnesota House seat in 1992, announced in July 2021 that he had been diagnosed with ALS, or amyotrophic lateral sclerosis (also known as Lou Gehrig’s disease).

ALS is an always-fatal progressive motor neuron disease that has no known cure. 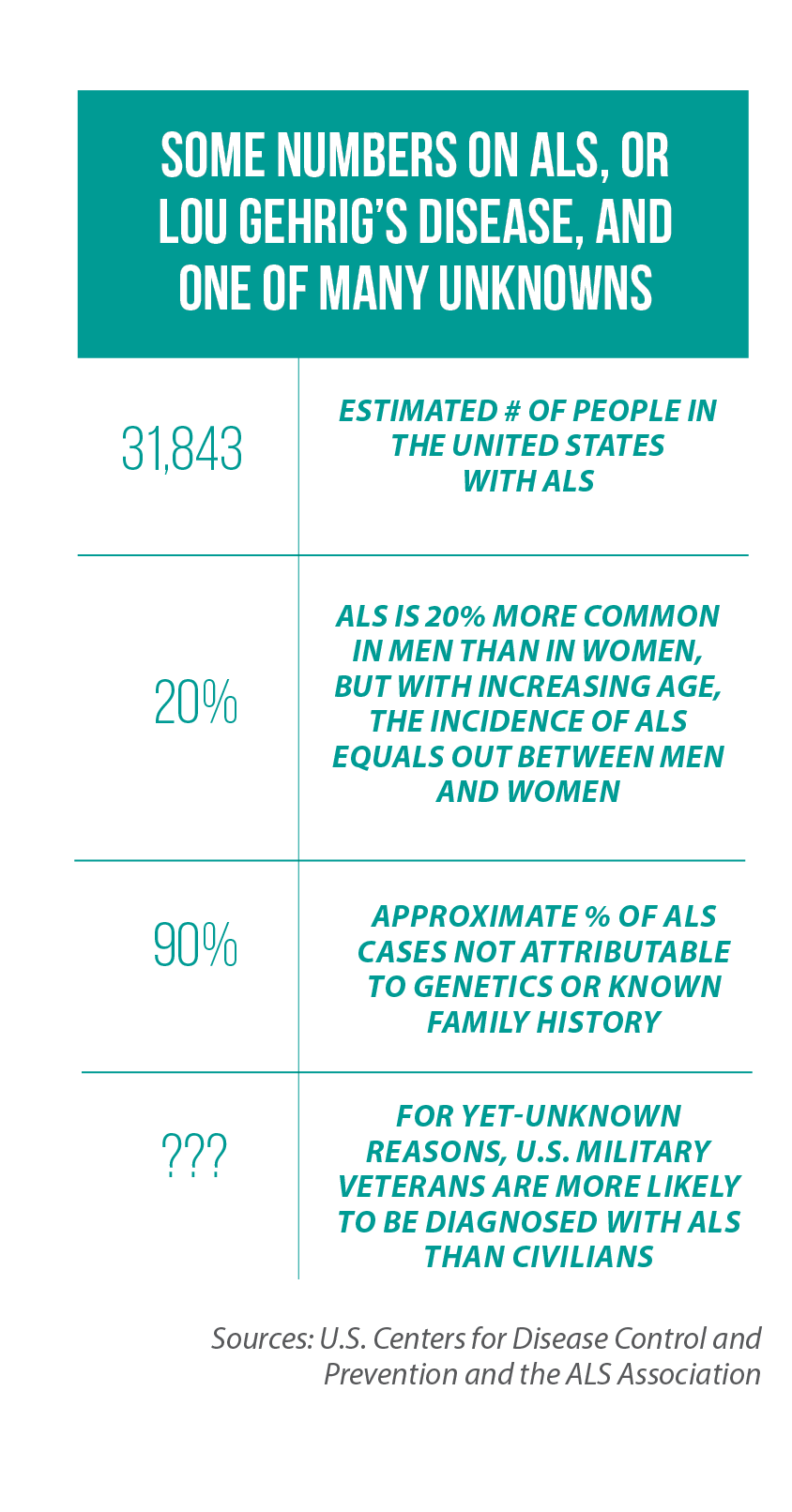 According to the ALS Association, most people in the U.S. who develop the disease do so between ages 40 and 70, with a median age of 55 at the time of diagnosis.

Men develop ALS 20 percent more commonly than women, and, for reasons still unknown, military veterans are more likely to be diagnosed with ALS than the general public.

Only 5 percent to 10 percent of cases can be attributed to a family history of the disease; in some of those cases the disease can be traced to a genetic mutation, the association says.

Opportunity to be a national leader

Minnesota’s law is the first of its kind in the country, Neu Brindley says, adding that as of early September, no research grants had been issued yet.

The state is also working with the ALS Association to further stretch the caregiver grant allocation by trying to provide training to family members to become caregivers (as opposed to hiring caregivers), she says.

This is important, Neu Brindley says, as Medicare doesn’t cover the kind of home care support ALS patients need — such as 24-hour care, meal delivery, homemaker or personal care services — because it only covers home care on a short-term or intermittent basis, which is impossible by definition for ALS patients.

“We have an opportunity in Minnesota to be a leader in this. So little money is put into this space [ALS research and support] that we can be a real leader with relatively little money,” Neu Brindley says, adding that she’s open to expanding caregiver funding but wants to see results from this first allocation. Such support is one of the ALS Association’s policy recommendations for states.

Tomassoni, quoted by the St. Paul Pioneer Press at a signing ceremony for SF 3372, expressed his hope that the state’s new investment marks “the beginning of the eradication of an insidious disease.”

“Not for me but for future generations,” he said. “[Baseball great] Lou Gehrig died of ALS in 1941, and for too long, little to nothing has been done in research to uncover new and effective treatments for ALS. … If we do nothing else this session, we can all say we accomplished something significant, something significant in a virtually unanimous fashion.

“I don’t remember ever in my 30 years in the Legislature passing such a significant bill this early in the session without leveraging it against something else. I think we can all be proud of that, too.”

Federal support for ALS research got a significant boost in the fiscal year 2022 budget — 20 percent above FY 2021 levels, to almost $200 million.

Part of that funding commitment includes implementation of the ACT for ALS law (H.R. 3537), a measure signed into law late last year. Money will go to public-private partnerships that research rare neurodegenerative diseases. The goals: advance understanding of the diseases, and develop new treatment methods.

Under the new law, too, the U.S. Food and Drug Administration was charged with developing a five-year action plan for extending the lives of patients through advances in drugs, other medical products and new treatment methods.

That plan was released in June.

The U.S. Congress also continued funding an ALS-focused research project at the Department of Defense ($40 million), while providing $115 million to the National Institutes of Health and $10 million for an ALS Registry and Biorepository, according to the ALS Association.