Term limits come to North Dakota, while Michigan voters OK a tweak to their law

North Dakota now has among the strictest laws on legislative term limits in the country. In November, more than 60 percent of voters in that state approved a constitutional amendment placing a lifetime cap on legislative service — eight years in the House and eight years in the Senate. With this change in North Dakota, all five Midwestern states that allow for citizen-initiated ballot measures now have term limits. 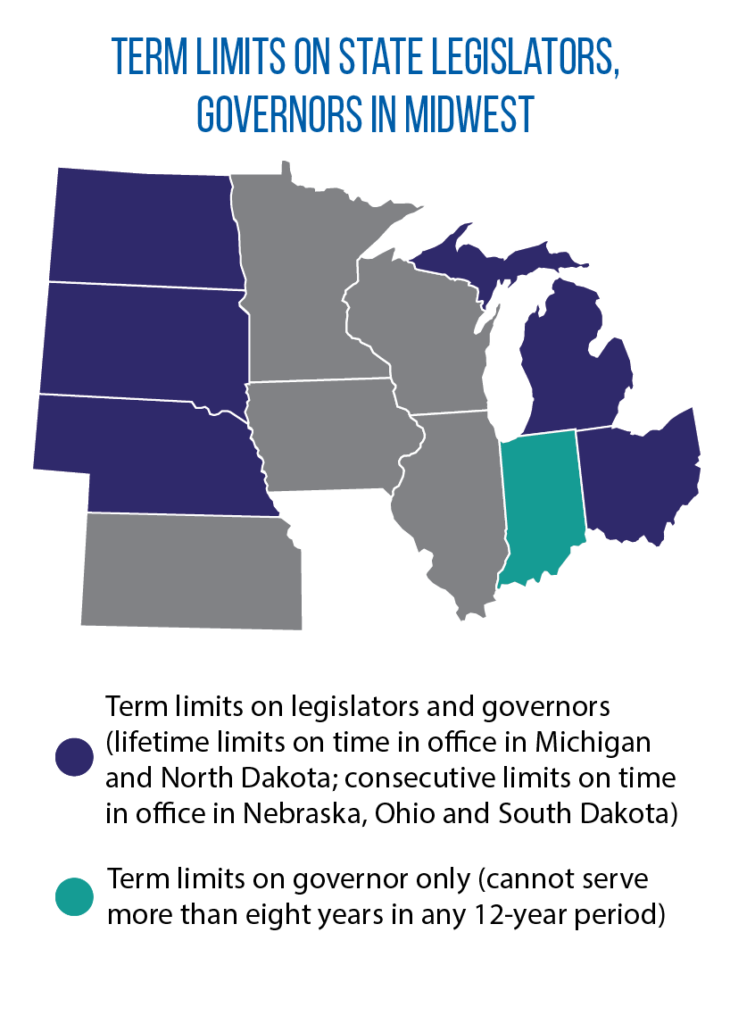 Three of these five states do not impose lifetime bans, however. Consecutive-only limits in Ohio and South Dakota allow legislators to bounce between the two legislative chambers and continue legislative service indefinitely, if they so choose and continue to be re-elected. (Nebraska has a consecutive ban as well, but it has a single-chamber legislature.)

In November, Michigan voters approved a legislatively referred constitutional amendment that retains, but modifies, that state’s term-limits law. Michigan’s lifetime cap remains in place, with a maximum of 12 years of legislative service instead of 14. However, all 12 of those years can now be spent in a single chamber. The previous law set limits of three two-year terms in the House and two four-year terms in the Senate. In part, legislators hope the tweak will allow for more legislative continuity and institutional knowledge in each chamber.

Also this year, North Dakota joined five other Midwestern states with term limits for governors. Each of these states imposes a cap of two four-year terms. North Dakota now joins Michigan with a lifetime cap on gubernatorial service; the four other states have consecutive-only limits.

Next year, one party will have full control of the state legislature and governor’s office in all but two Midwestern states, the exceptions being Kansas and Wisconsin.

This is because of a shift in the partisan balance of the Michigan and Minnesota legislatures. Republicans had enjoyed majority control of the Michigan House and Senate, but Democrats were able to “flip” both legislative chambers in November while Gov. Gretchen Whitmer won re-election. Minnesota had been one of the few U.S. states with a split legislature: one party controlling one legislative chamber each. Democrats now have a “trifecta.” They held control of the House and flipped partisan control of the Senate, while Minnesota Gov. Tim Walz won his re-election bid.

Over the next two years, Republicans will have full control of state legislatures and governor’s offices in Indiana, Iowa, North Dakota, Ohio and South Dakota. Along with Michigan and Minnesota, Democrats have a trifecta in Illinois. (Nebraska has a Republican governor and nonpartisan unicameral legislature, though a majority of legislators are Republican.)

One other noteworthy result from this year’s elections was the success of incumbent governors: In the Midwest, all eight seeking re-election won.

South Dakota will soon become the ninth state in the Midwest that expands its Medicaid program to cover more low-income adults. The ballot measure won the support in November of 56 percent of voters. Since passage of the Affordable Care Act, states have had the option of expanding the reach of this public health insurance program.

Most states have done so through legislative and gubernatorial action. However, South Dakota now joins Nebraska in having the expansion approved through a citizen-initiated ballot measure. Kansas and Wisconsin are the only states in the Midwest, and two of 11 nationally, that have not expanded Medicaid under the ACA, according to the Kaiser Family Foundation. 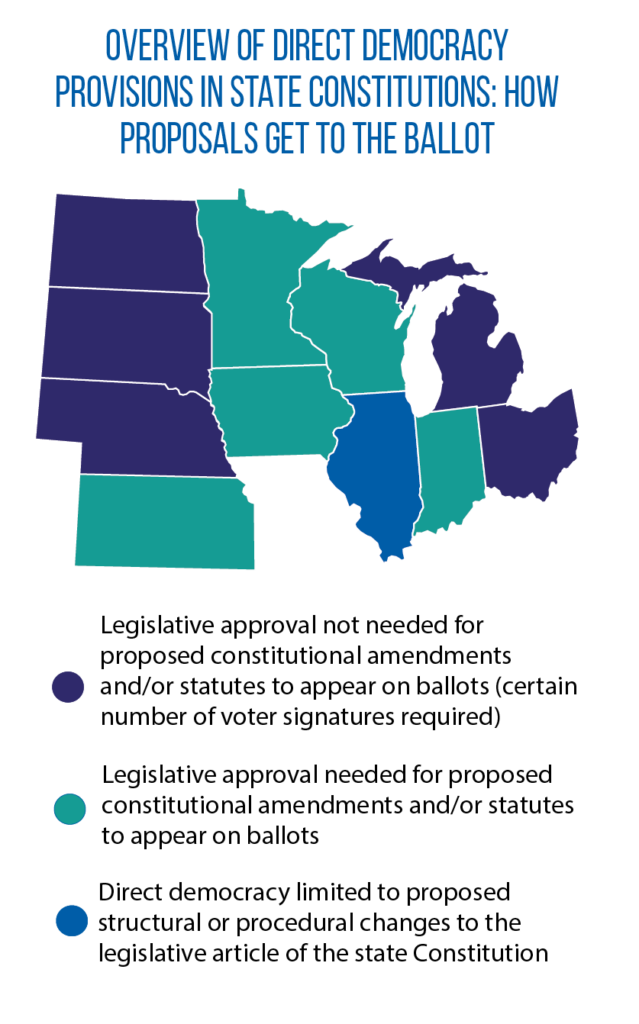 Michigan is the first state in the Midwest with constitutional language that explicitly secures a right to an abortion. Fifty-seven percent of state voters approved Proposal 3 in November. In the Midwest, since the U.S. Supreme Court’s overturning of Roe v. Wade, other notable developments on this issue have included the Indiana General Assembly’s adoption of a ban on most abortions and Kansas voters’ rejection (in August) of a legislatively referred proposal which stated, in part, that the Kansas Constitution “does not create or secure a right to abortion.”

At least two other legislatively referred “rights” amendments appeared on state ballots in the Midwest this year:

Voters change laws on elections, bail (in Ohio) and minimum wage (in Nebraska)

In all, voters in eight Midwestern states decided the fate of 15 proposed constitutional amendments or statutes this November. Among the measures that passed: