Capital Closeup: More than 40 percent of U.S. state legislative races had no party competition in 2022

The "no contest" rate varied widely in the Midwest; Michigan featured the highest number of competitive races

Even before a single ballot was cast, the outcome of party control in five of the Midwest’s 20 partisan legislative chambers already had been decided. The reason: many legislative races went uncontested by one of the two major political parties.

Nationwide, more than 40 percent of the 6,278 state legislative seats lacked two-party competition, and the “no contest” rate was even higher in Illinois, Indiana, Iowa, Kansas, Nebraska, North Dakota and South Dakota, according to Ballotpedia researchers.

Republicans were assured majorities in the South Dakota, Indiana and Ohio senates, as well as super-majority control of the entire North Dakota Legislative Assembly. Outside the Midwest, the absence of opposing-party candidates ensured Democrats control of the California Senate and entire Massachusetts Legislature.

“When you look across the country, you can say that about one-third of the legislators win just by signing up,” says Steven Rogers, an associate professor of political science at St. Louis University, noting the lack of both primary- and general-election challenges. “That’s troublesome when we think of this idea that the purpose of an election is to create incentives for those in office to serve their constituents.”

Past research has found an adverse impact on at least some measures of job performance, says Rogers, who studies uncontested elections and is writing a book about accountability in state legislatures. Compared to their legislative peers, retiring or unchallenged legislators are more likely to miss roll-call votes, sponsor fewer bills and get fewer measures enacted.

Party control not in doubt

Fifty years ago, it was much more common for state legislative seats to be contested — around 80 percent of them, on par with how many U.S. House races had two-party competition at the time.

Rogers points to a rise in safe districts (one party having a major electoral advantage) as a primary reason for many legislative seats going uncontested. In addition, partisan control of many legislative chambers often is not in doubt. Entering this year’s election, for example, nearly all of the Midwest’s chambers were deemed “safe” or “likely safe” for one of the two parties. The two exceptions were Michigan and Minnesota.

In turn, those states had the region’s highest rate of contested elections: 98.6 percent of the legislative races in Michigan and 87.1 percent in Minnesota. 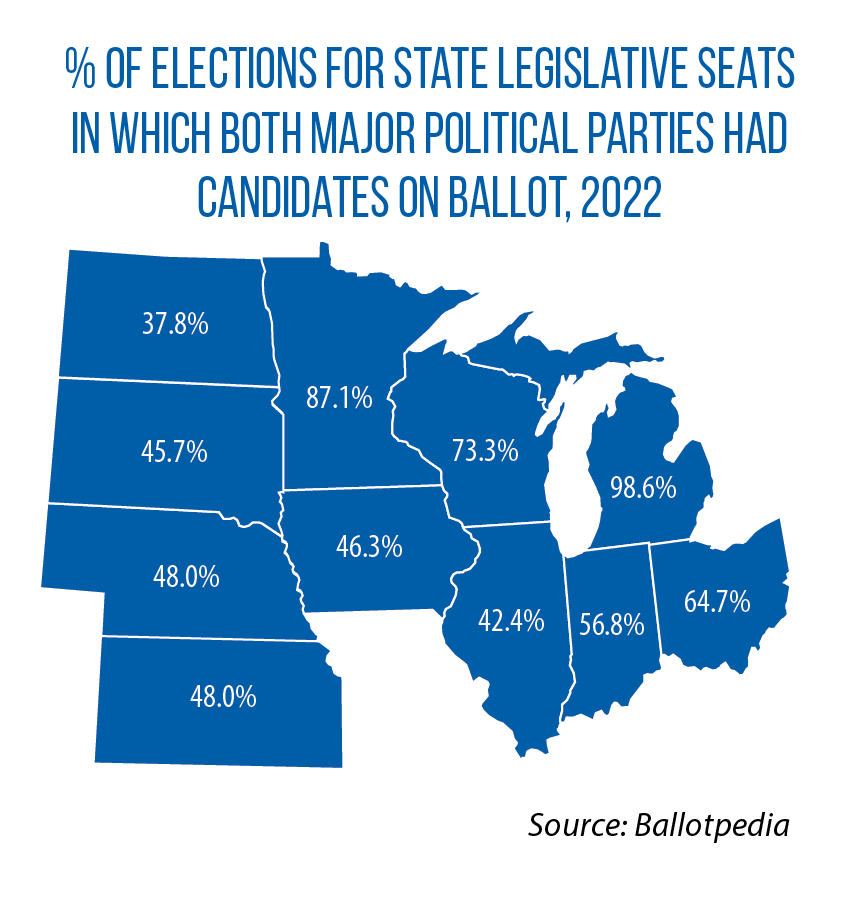 Along with the partisan lopsidedness of districts, Rogers says other factors may dissuade would-be legislative candidates. Running a campaign takes considerable time and money, and once in office, the job of legislator requires many hours and days away from family, long commutes and a forgoing of other career opportunities.

Some of those same considerations also cause legislators not to seek re-election. In the Midwest this year, the number of legislative retirements was much higher than usual in some states — the highest in 50 years or more in Minnesota and Wisconsin. Term limits in Michigan, Nebraska, Ohio and South Dakota also have forced many legislators to leave office.

This year’s number of open state legislative seats in the Midwest (no incumbent running) ranged from a low of 12.4 percent in Illinois to a high of 54.2 percent in Nebraska. Because of a nationwide increase in open seats, as well as a higher number of incumbents facing primary challengers, Ballotpedia rated this year’s election cycle for U.S. state legislative races as the “most competitive” since 2010. However, compared to the last two cycles, there was less competition in the 2022 general election among the two parties.