Since 1891, Eastern Market has served as a hub for Michigan farmers in the heart of the state’s largest city. Its value only grew when the COVID-19 pandemic hit.

“Families from all over Michigan drove to the market to access local food,” says Brandon Seng, the director of food business development at Eastern Market. But this big increase in demand also showed the market “couldn’t keep running on 100-year-old technology and facilities,” Seng adds.

To adequately store food, accommodate vendors and serve customers, the nation’s largest historic public market district (owned by Detroit, run by a nonprofit) is in need of an upgrade. And as one example of how states in the Midwest are trying to bolster their local food systems, Michigan legislators allocated $12 million in the most recent budget for capital improvements at Eastern Market.

“While the funding may be going to an urban Detroit location, the return on investment is going to be realized at rural family farms across Michigan and by having a safer and more secure food supply for everyone,” Michigan Sen. Roger Victory says.

In all, Michigan’s FY 2023 budget includes $50 million in one-time funding for grants that support the state’s food supply chain, as well as food safety and security. Additionally, since 2017, lawmakers have provided more than $7 million in grants to expand local food processing and distribution. 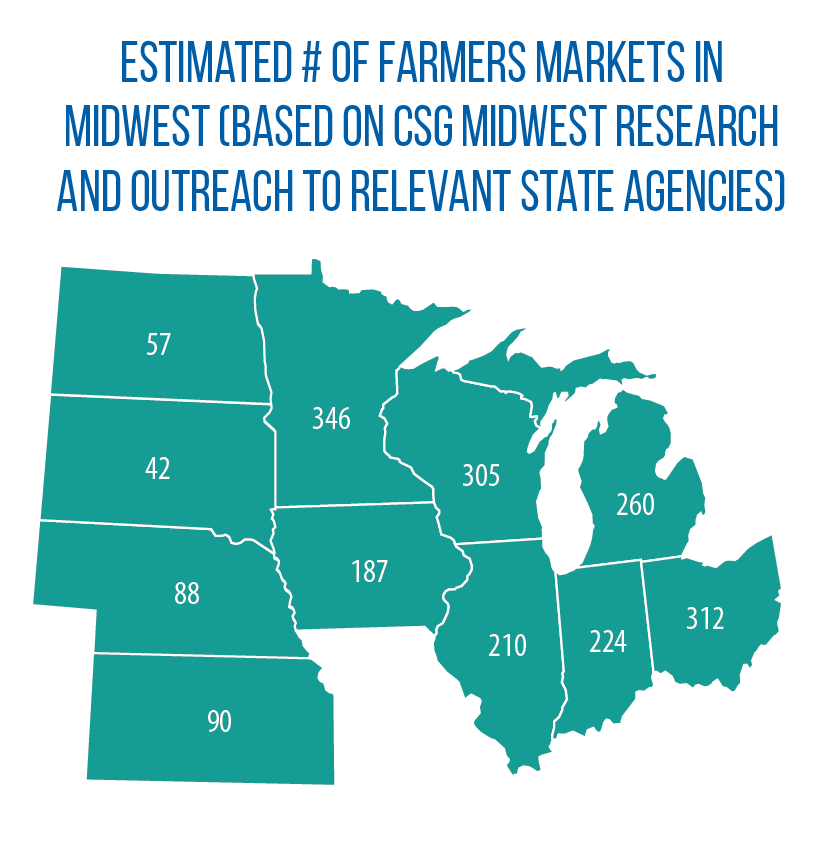 This emphasis on “local” is partly a response to disruptions during the pandemic to food production, distribution and inventory levels. “We need to take the lessons learned from broken supply chains and focus on keeping our local communities fed and our local farmers growing,” Victory says.

Hence the new state support in Michigan for the 315-acre Eastern Market, a place that hosts 175 different vendors and attracts 2 million visitors a year.

“While most people see it as a farmers’ market, that is only one aspect of it,” Seng says. “It is a wholesale market, a food hub, and an aggregation and distribution facility. Michigan farmers from as far as 200 miles away bring everything from asparagus to peppers to the market, and independent grocers can buy the products for retail sales.”

Across the United States, more than 2,000 farmers markets are in operation, and those that could stay open during the pandemic became lifelines of sorts — for producers who lost commercial contracts due to breakdowns in the global supply chain, and for consumers who couldn’t find what they needed or wanted on grocery shelves.

One example of their increased importance: A survey by the Farmers Market Coalition showed an almost 40 percent increase in sales from farmers markets for the Supplemental Nutrition Assistance Program (SNAP) between 2019 and 2020.

States currently support farmers markets in a variety of ways, including grants to help with promotion and awareness or to modernize operations (including installing equipment to accept payments for SNAP benefits). They also play a central role in overseeing farmers markets, with regulatory structures that are long-standing and often fairly consistent across the Midwest.

More options on how home-based food is sold

In contrast, laws have varied widely on how to handle another part of local food systems: home-based businesses. What foods can people sell from their homes? Where can they sell these products?

ors have been taking a close look at those questions, and since the onset of the pandemic in 2020, five Midwestern states (Illinois, Indiana, Iowa, Minnesota and South Dakota) have changed their laws to open up new sales options.

One of those new measures is Indiana’s HB 1149.

Clere, who previously helped manage a farmers market in his hometown, says the new law allows for online sales. “They can keep selling at farmers markets and then turn those customers into repeat buyers [via online transactions],” Clere says.

Unchanged in Indiana’s new law, he adds, are the types of foods that can be sold by these home-based businesses — only items that aren’t potentially hazardous and don’t need refrigeration to remain safe for consumption. Sanitary procedures must be followed by these vendors, who also are required to complete food-handling training, Clere says.

In neighboring Illinois, the state’s Home to Market Act (SB 2007 of 2021) opens up new direct-sales opportunities for cottage food producers — for example, selling to customers online or at fairs and festivals. The same law also removed a $1,000-a-month cap on sales while allowing for home-based pickups, shipping and delivery.

New laws in Iowa and South Dakota, meanwhile, address the other question: What can people sell from their homes? In both states, legislators chose to loosen restrictions.

Minnesota lawmakers also recently changed the statutory limit on annual sales, from $18,000 to $78,000. Another provision in that 2021 law (SF 958) permits home-based food businesses to be structured as limited liability corporations. With an LLC, business owners are able to protect personal assets in the event of a lawsuit against them.