Concerns about pesticide misuse, damage to nearby fields lead to legislative action in Iowa and Indiana

Over the past four years, the number of complaints related to the misuse of pesticides has spiked in Iowa, reaching 329 in 2020. Private, non-commercial applicators such as farmers were the subjects of about half of last year’s complaints. And in those instances, the state of Iowa was severely limited in what it could do.

“The issue was brought to my attention by local media, and I felt it was important to correct the problem,” Iowa Sen. Kevin Kinney says. “I couldn’t believe that the Department of Agriculture didn’t have a way to respond to private applicators.” (In contrast, civil penalties could be levied against commercial applicators.) 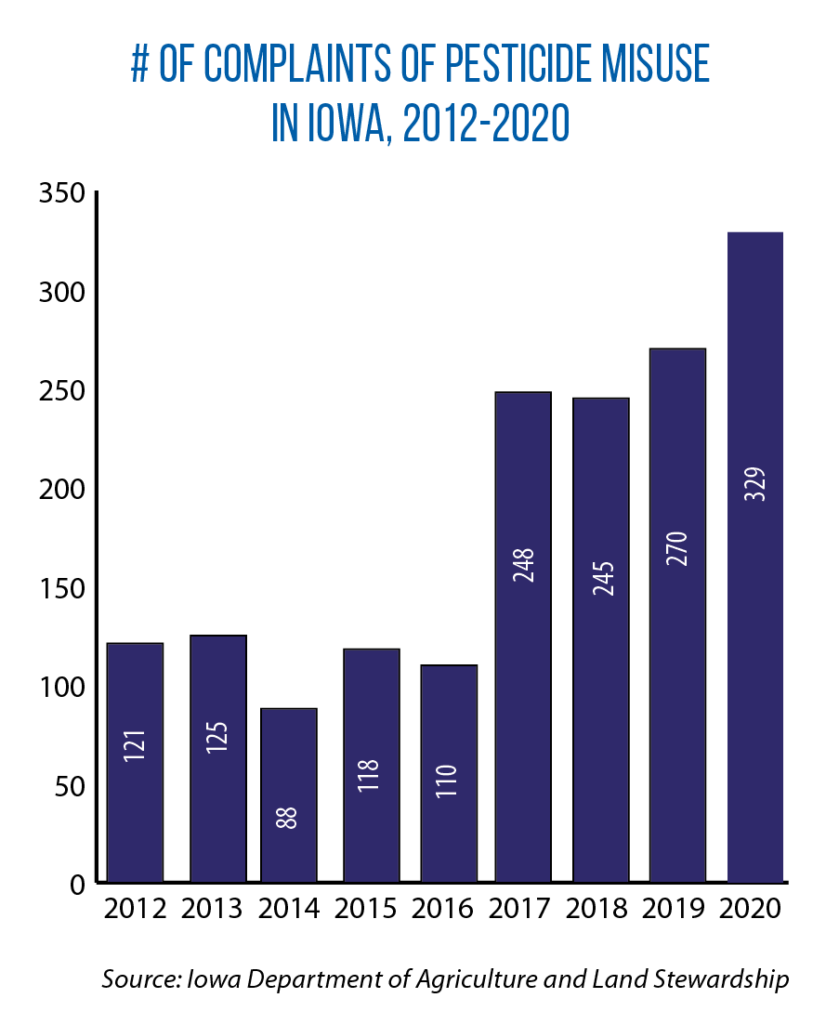 This year, Kinney worked with his colleague, Sen. Dan Zumbach (chair of the Senate Agriculture Committee), along with Department of Agriculture staff, on a bipartisan legislative fix. The result was passage of SF 482, a new law that establishes civil penalties for instances in which chemicals drift from one field and cause damage on neighboring land.

Similar legislation was passed in Indiana this year. As of early April, SB 227 was awaiting the governor’s signature after being approved by overwhelming majorities in both of that state’s legislative chambers.

“[It] specifies a warning and fine structure for civil penalties for any applicator, commercial or private, with the fine varying depending on the severity of the violation,” says Indiana Sen. Jean Leising, sponsor of SB 227.

Last year, Leising also had tried to address increased concerns in her home state about pesticide misuse. That 2020 legislation failed to advance, but it helped lead to a summer study by Indiana’s governor-appointed Pesticide Review Board.

Leising credits the board’s work with this year’s legislative success. Not only did it thoroughly analyze the issue in a transparent way, she says, the board helped facilitate discussions among stakeholders and develop draft legislation.

SF 227 specifies that most first-offense, unintended violations of the state’s pesticide laws will result in a warning. If an additional violation occurs within five years, the second offense can result in a fine of $250.

For more egregious or intentional violations, fines can be up to $1,000. Funds collected for these violations must be used to provide pesticide education.

In Iowa, Kinney says, work on SF 482 began after local media reports shed light on the growing number of complaints about pesticide drift. Many of these complaints come from the increased use of dicamba, a chemical herbicide designed to kill broad-leaf (as opposed to grass) plants.

Dicamba is extremely effective but also very volatile, prone to becoming airborne and drifting to other fields. SF 482 was signed into law in March after receiving unanimous approval in both legislative chambers. It allows for the assessment of a civil penalty of up to $500 for both private and commercial applicators when chemicals drift and damage neighboring crops.

A five-member panel is being created to help establish the new civil penalties, as well as procedures for assessing and collecting fines. Across the country, pesticide applicators, whether commercial or private, are regulated by federal and state law. When drift and unintended crop damage occurs, landowners who suffer the damage can file complaints with a state department of agriculture. (Private lawsuits are another potential recourse, as well as the mechanism for seeking compensation for crop damage.)