Minnesota looks to build on region-leading efforts in energy conservation

Already a regional leader in energy conservation, Minnesota has a new law that its supporters say will provide more choices to consumers as well as a mix of investments and incentives to reduce energy use and encourage a switch to cleaner power sources. 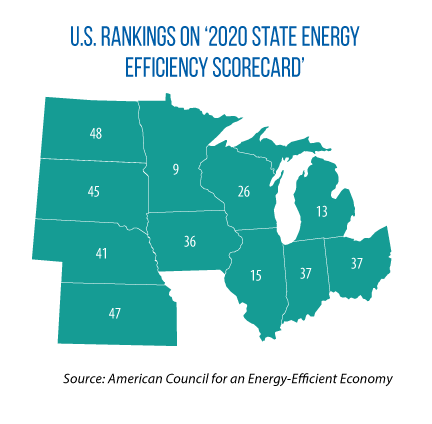 The bipartisan Energy Conservation and Optimization Act (HF 164) was signed into law in May. It builds on the state’s existing, ratepayer-funded Conservation Improvement Program, which offers various ways for households and businesses to achieve energy savings — for example, the use of energy audits and rebates to install high-efficiency appliances, lighting, and heating and cooling systems. Among this year’s legislative changes, according to MinnPost:

The American Council for an Energy-Efficient Economy ranked Minnesota ninth among U.S. states in its “2020 State Energy Efficiency Scorecard,” which compares and analyzes policies across the country. The council singled out Minnesota’s energy policies related to building codes and state-owned buildings. Michigan is the second-highest-ranked state in the Midwest (see map), due in large part to a 2016 law (SB 438) that extended electric and natural gas savings targets and offered additional financial incentives to utilities.