Capital Closeup | Impeachment and the states

Impeachment and the states: A look at its history and the provisions in place today

It’s a word and a power of the legislative branch most commonly associated these days with removing a U.S. president from office. But “impeachment” not only appears in nearly all of the nation’s state constitutio

ns, its inclusion in them — as a check against overreach or abuses of power by state-level executive and judicial branches — predated the writing of the U.S. Constitution.

“Ten of the 12 state constitutions at the time already had impeachment language in them,” notes Frank Bowman, a professor at the University of Missouri School of Law.

The reason: The drafters of those state constitutions were well-versed in English history, and aware of how and why Parliament used the threat of removing a monarch’s ministers from office as a way to curb abuses of power. In his book “High Crimes and Misdemeanors: A History of Impeachment for the Age of Trump,” Bowman traces this tool of the legislative branch back to the 14th century. And he uses impeachment’s centuries-long history to help explain what it is, and isn’t.

“I think a lot of times it’s wrongly viewed as a criminal process, and seen through that lens,” Bowman says. “But it’s not that. It’s about checks and balances and finding the right constitutional balance.

Today, every U.S. state constitution except Oregon’s allows for the legislative 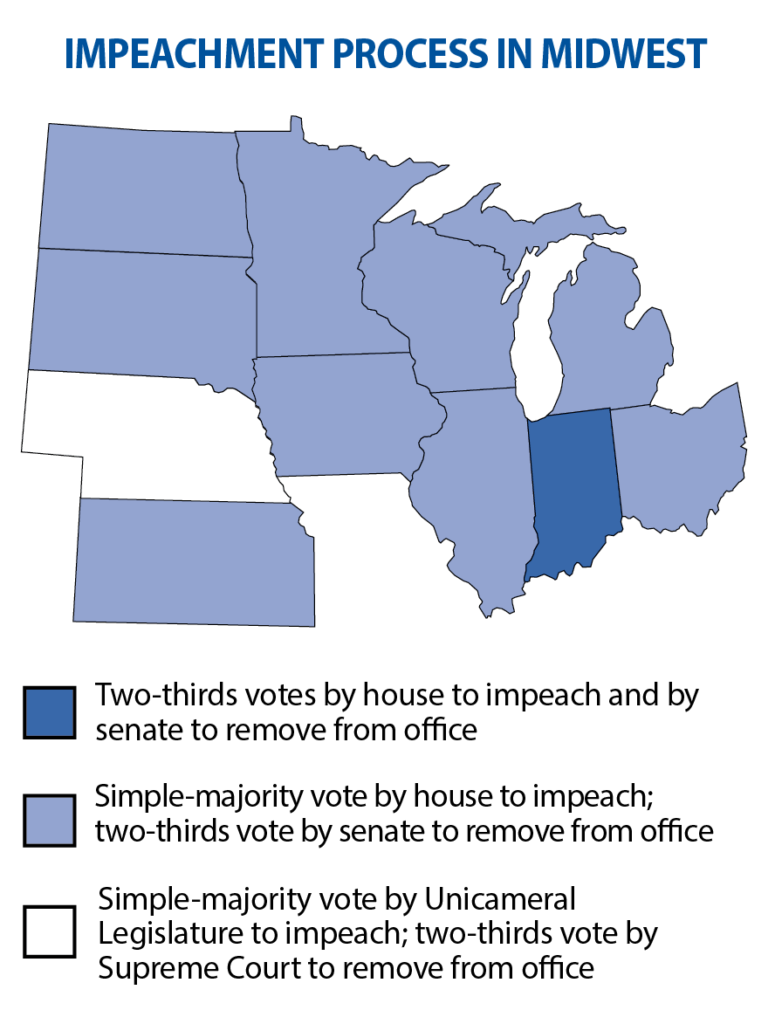 impeachment of governors, judges and other state officials. In the 11-state Midwest, the process laid out in most state constitutions is a familiar one: impeachment by the house, removal from office by the senate (see map).

But there are some notable exceptions and differences:

In every Midwestern state where the senate has the power to convict and remove someone from office, a two-thirds vote is required. In Illinois, Indiana, Kansas, Michigan, North Dakota and South Dakota, this means two-thirds of the elected members. The threshold is two-thirds of the members present in Iowa, Minnesota, Ohio and Wisconsin.

Most state constitutions in the Midwest list one or more grounds for impeachment — for example, crimes, misdemeanors, malfeasance, and/or corrupt conduct.

The North Dakota and South Dakota constitutions also specify “drunkenness” as an impeachable offense. In Nebraska, officials are “liable to impeachment” not only for their conduct while in office, but also “in pursuit of such office.”

In Illinois, the Constitution does not list specific grounds for impeachment; it’s instead left to House investigators “to determine the existence of cause.” A decade ago, the Illinois House articles of impeachment against Gov. Rod Blagojevich cited 13 instances of abuse of power. The state Senate then voted unanimously to remove Blagojevich from office.

Six other governors in U.S. history, including Nebraska Gov. David Butler (in 1871), have been impeached and removed from office by a state legislative branch, according to Ballotpedia.