How have states tried to promote or facilitate the development of ESOPs?

Question of the Month

An ESOP is a type of tax-qualified retirement plan, one that states such as Iowa have identified as a tool for helping retain businesses when owners decide to sell some or all of their interests in a company. Here is how an ESOP generally works: A privately held company contributes its stock, or money to buy its stock, to a retirement plan for employees.

Each worker participating in the plan has his or her own account, and an ESOP trust is created to hold these shares of company stock. ESOPs can be a mechanism for allowing partial or full ownership of a privately held company to be transferred to employees (when the owner retires, for example). In contrast, the sale of a business to an outside entity increases the risk of lost jobs. 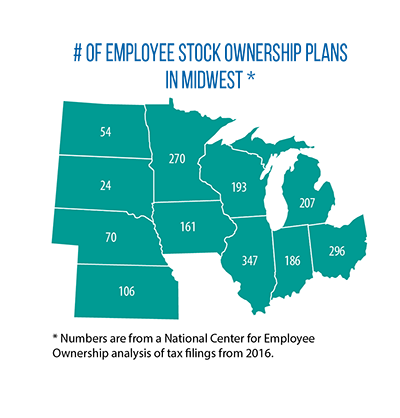 According to the National Center for Employee Ownership, other potential benefits of ESOPs include improving retirement security, reducing a company’s tax burden, bolstering worker morale, and giving employees a voice in management. Since the passage of legislation in 2012 (HF 2465), Iowa has provided a tax incentive to encourage the sale of in-state businesses to employees: Owners get a 50 percent deduction from income taxes on any net gains from the sale; the transaction must result in the employees (via the ESOP) owning at least 30 percent of the company. Iowa also reimburses 50 percent of the costs for businesses that conduct studies on the feasibility of setting up an ESOP.

Another policy strategy for states is to create separate offices or commissions that encourage employee ownership. In Colorado, for instance, the governor signed an executive order in 2019 creating such a commission and giving it three tasks: 1) provide technical assistance to businesses; 2) expand awareness about the benefits of employee ownership; and 3) identify barriers and recommend how to remove them. Colorado also offers revolving loans (HB 1214 of 2017) to help businesses become employee-owned.

Legislation introduced three years ago in Wisconsin (SB 460) proposed opening a center for employee ownership in the state’s university system. The bill, which did not pass, included several other provisions — tax incentives, loans and loan guarantees to finance ownership transfers, and state purchasing preferences. Bills introduced over the past year in the Midwest include: