This spring, as schools across the nation shut down in-person instruction due to the COVID-19 pandemic, North Dakota and broadband service providers in the state stepped up.

The result was a quick reduction in what has been dubbed the “homework gap.”

“What’s really impressive is that in a matter of weeks, North Dakota was able to get 90 percent of unconnected student homes hooked up to broadband,” Jack Lynch, state engagement director for the nonprofit group EducationSuperHighway, said during a July 30 webinar held by three committees of The Council of State Governments’ Midwestern Legislative Conference.

The gap in student access to internet connectivity is nothing new. What’s changed, though, is the urgency among state policymakers to address the problem, as schools rely more on remote learning to replace some or all in-person instruction and to ensure the continuity of learning if buildings have to be closed due to health- or weather-related events. 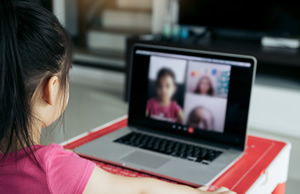 According to Lynch, close to 10 million lower-income U.S. households with school-age children do not have a high-speed internet connection. Every state has its unique set of challenges on broadband expansion, but Lynch singled out North Dakota because its rapid response incorporated strategies that can be replicated across the country. First, identify students lacking home access. Next, team up with providers to ensure affordability and adoption.

In North Dakota, a list of 2,000 unconnected students was generated and then shared with broadband providers, who found that a vast majority of households (1,865 of the 2,000) could receive services almost immediately. At least initially, these providers launched the service at no cost, as part of a “keep Americans connected” pledge.

Fast forward a few months, and North Dakota is “continuing conversations with these service providers about how to use [federal] CARES money and some other funding sources to keep all of these households online,” Lynch said.

He told a similar promising story about access among students in Chicago Public Schools. There, the district partnered with local service providers to identify students who lacked home access. Then, it issued a request for proposals from these providers, used a mix of funding sources (federal, local and philanthropic) to cover the costs, and reached out to families in need of service.

“The key is the school districts, as opposed to the individual families, are starting to take responsibility for getting the solution deployed,” Lynch said.
Like school districts, states can take on that greater responsibility as well. “Then it’s seen as a business opportunity for providers, and the reason is the volume and the ability to deal with just a single entity, as opposed to having to go household to household,” Lynch said. “That is totally a game changer for service providers. It makes offering a low-cost service actually attractive to them.”

States also have the chance to close the “homework gap” by using a portion of the billions of federal dollars earmarked for education in this year’s CARES Act. According to Lynch, Indiana was one of the first U.S. states to seize this opportunity, developing a $62 million program that supports initiatives to expand connectivity and students’ access to devices.

In Ohio, as part of a new $50 million grant program, the state will help schools establish internet “hotspots” for unconnected students. That state also is helping school districts work with providers. It recently issued a “request for information” from various entities seeking their lowest-cost options for providing students with device and broadband service. Ohio is using that information to create a pricing sheet for school districts.

Outside the Midwest, Lynch told legislators, states such as Virginia have begun to require school districts to collect information on which of their students lack home access to high-speed internet.