Like the U.S. Constitution, most state constitutions give the governor authority to appoint agency directors with the advice and consent of the legislative branch’s upper chamber.

Unlike presidential appointments, however, gubernatorial ones rarely create controversies or ignite political storms, with legislators deferring to the governors on who will help run the executive branch, says Christopher Mooney, a professor of state politics at the University of Illinois at Chicago.

Recent disputes in politically divided Minnesota and Wisconsin have proven to be exceptions to that rule.

In August, the Minnesota Senate rejected the nomination of Nancy Leppink as commissioner of the state’s Department of Labor and Industry, a position to which she had been appointed by Gov. Tim Walz in February 2019. According to the Minnesota Legislative Reference Library, eight gubernatorial appointees for state agencies or boards have been rejected since 2000.

In November 2019, the Wisconsin Senate voted unanimously to approve two of Gov. Tony Evers’ appointees but then voted along party lines to deny confirmation for Brad Pfaff, his designee to lead the state’s Department of Agriculture, Trade and Consumer Protection.

The Wisconsin Legislative Reference Bureau said it was the first time that has happened since 1987. (Pfaff is now running for a state Senate seat.)

In each case, Republicans cited disappointment with the nominees’ performance in office leading up to their confirmation votes. And in each case, Democrats cited statements of support for the nominees from the economic sectors they were overseeing, and said the rejections were just a way to essentially poke governors from a different party with a sharp political stick. 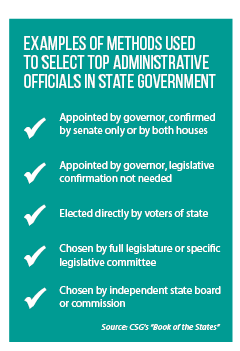 Though gubernatorial appointment/senate confirmation is the most common way that top administrative officials secure their positions, The Council of State Governments’ “Book of the States” (CSG’s annual “encyclopedia of state government”) details myriad methods used by states. For example:

Other methods of appointment include selection by an independent state board or commission (for example, state boards of education) and elections by the full legislature or a legislative committee.

Compared to the federal model, too, some Midwestern state constitutions provide more-detailed procedures regarding the confirmation process.

The Illinois Constitution gives the Senate 60 days to act on a nomination; if it fails to do so, confirmation is presumed given. It also bars rejected nominees from being appointed or renominated to the same post during the same session “except at the Senate’s request.”

The North Dakota Legislative Assembly meets only every other year, and that state’s Constitution allows the governor to make temporary appointments to vacancies occurring while the Senate is recessed or adjourned but requires a nomination “when the Senate reconvenes.”

As in Illinois, rejected nominees in North Dakota can’t be renominated or appointed for the same office in the same session, or during a Senate recess or adjournment, “except on request of the Senate.”

Ohio’s Constitution also considers consent as given if the Senate fails to “act by roll call” within a specified period.