October 2020 Question of the Month | Juveniles and sex offenses

Do Midwestern states require that young people adjudicated in juvenile court for certain offenses be part of a state-run sex offender registry?

Juvenile justice Question of the Month

Answer: With the exception of Nebraska, every state in the Midwest has statutes that require certain juveniles to be registered as sex offenders. Nebraska does have a sex offender registry that adult offenders must be a part of, but this requirement typically does not apply to juveniles. There is one exception, however — if individuals have been adjudicated as juveniles for a sex offense in another state. 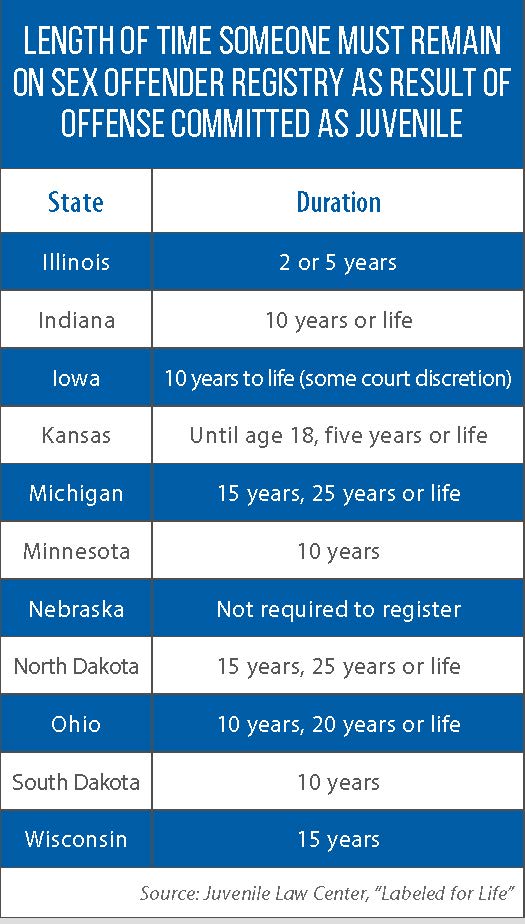 That requirement was affirmed two years ago by the Nebraska Supreme Court, based on its reading of a state law that dates back to 1997.

Elsewhere in the Midwest, juveniles must register, regardless of where the offense was committed. Important differences exist in these state laws, however, as a study released earlier this year shows. According to the Juvenile Law Center’s “Labeled for Life,” more than 200,000 individuals are on sex offender registries for offenses they committed as children.

1) most or all offenses in states such as Illinois, Indiana, Minnesota and Wisconsin;

2) higher-tier, more serious offenses in states such as Iowa and Michigan; and

3) only rape in South Dakota.

In Ohio, any juvenile 14 or older who has twice committed a “sexually oriented” offense or “child-victim oriented offense” is placed on the registry.

Earlier this year, the Ohio Supreme Court upheld the state’s registry requirement. That decision stemmed from a case brought by an individual who challenged Ohio’s law on the grounds that it was an unconstitutional violation of due process. The individual in the case was 14 years old when he was adjudicated in juvenile court on a felony sex offense, and 19 years old when he was indicted in adult court for failing to register.

Another option for states is to give judges discretion on whether a juvenile should be placed on a sex registry. In Kansas, such discretion is given to judges for cases involving nonviolent offenses. North Dakota requires mandatory registration for felonies and provides judicial discretion for misdemeanors.
States also differ on how long they require individuals adjudicated in juvenile court on a sex offense to remain on the registry. In the Midwest, the time frame varies from two years to life, depending on the state and severity of the offense (see table).

In some states, too, these individuals appear on publicly available websites that list sex offenders.

According to the “Labeled for Life” study, Indiana and South Dakota include these names on a publicly available website; they are not included in Iowa, Kansas and Minnesota. A third option is for states to leave this decision to judges or law enforcement, or to only include the names of people who committed violent or more serious sex offenses as juveniles.

The Juvenile Law Center issued the study as part of its efforts to change state laws that place young offenders on registries. The center says registration requirements are imposed without consideration of individual circumstances and without regard to research showing that children who engage in sexual offenses are unlikely to recidivate.

The center also says being on a registry can harm an individual’s ability to secure housing, live with siblings, or get a job or an education.