On Dec. 14, 2020, presidential electors in the 50 states and District of Columbia met in different places across the country (usually state capitol buildings, as required under most state laws), marking the start of the final phase of the race for president. These electors — chosen by the political party of the winning candidate in their respective states — cast votes for president and vice president. The results, in the form of “certificates of the vote,” were then sent to the president of the U.S. Senate, among others, in preparation for a special joint session of Congress in early January. At this joint session, the electors’ votes are counted and results read aloud. The race for president officially ends.

In 2020, about 20 percent of the nation’s presidential electors came from the 11-state Midwest. Here is an overview of the U.S. Electoral College, the impact of state laws on the process, and trends in vote allocation for the Midwest. 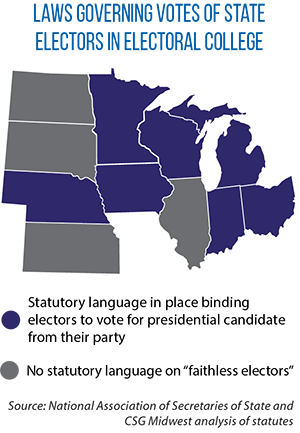 Under the U.S. Constitution, written before the rise of national political parties and national elections, state legislatures are given the power to appoint electors in their respective states. And in the nation’s first presidential elections, legislatures appointed electors without direct public input, notes the U.S. Election Assistance Commission.
Today, though, state laws are in place to ensure that the individuals chosen to vote in the Electoral College represent the party of the presidential candidate who won the state’s popular vote.

Michigan has one of the Midwest’s more direct statutory provisions on this subject: “The candidates for electors of president and vice-president who shall be considered elected are those whose names have been certified to the secretary of state by that political party receiving the greatest number of votes.”

The language of state laws also determines what electors can, or can’t do, when casting their votes for president and vice president. In the Midwest, electors in Indiana, Iowa, Michigan, Minnesota and Nebraska must pledge to cast their vote for the presidential candidate of the party they were selected to represent. These states also have specific statutory language for canceling the vote of an elector who doesn’t fulfill the pledge, as well as for removing/replacing this “faithless elector.”

According to the National Association of Secretaries of State, 31 states require presidential electors to cast their vote for the candidate of the party they were selected to represent. A handful of states (none in the Midwest) establishes penalties for “faithless electors” — for example, a fine of $1,000 or possible imprisonment in California and criminal conviction in South Carolina, according to the nonpartisan group FairVote.

In a July 2020 decision of the U.S. Supreme Court, justices ruled that states have the constitutional authority to punish faithless electors.

The Midwest is expected to lose three Electoral College votes — and maybe more — during the nation’s next reapportionment, the political consulting firm Election Data Services 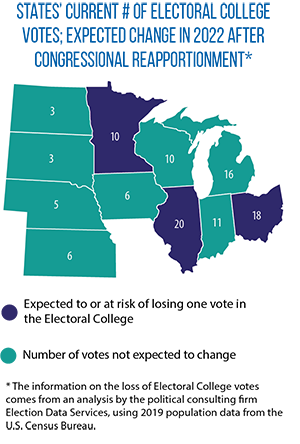 noted in a 2019 analysis of population data from the U.S. Census Bureau. Its analysis showed Illinois, Michigan and Minnesota losing one vote each; Ohio also lost one when trends were projected for 2020. For part of the latter half of this decade (2010-2020), Minnesota’s population has been growing at a faster rate than the nation’s; if this trend continues, its Electoral College vote number could remain the same. On the flip side, Illinois appears close to losing two seats.

Why the winner doesn’t take all in Nebraska, and how the ‘small-state bump’ works

Nebraska is one of two exceptions (along with Maine).

Of Nebraska’s five Electoral College votes, only two are awarded based on the state’s popular-vote winner. The other three are allocated based on results in each of Nebraska’s three congressional districts. In 2020, the state’s vote for president was split — four for Donald Trump, one for Joe Biden. Bills have been introduced in Nebraska in recent years to move to a winner-take-all system, with one argument being to consolidate the state’s already-limited power in presidential elections.

Nebraska, though, is one of seven states in the Midwest that gets a slight bump in its allocation of Electoral College votes compared to its share of the total U.S. population (see table). This “small-state” bump is the result of how Electoral College votes are allocated — two votes for every state, regardless of population size, in addition to votes being allocated based on the state’s number of congressional districts (which is based on population).

This small-state bump is one way a presidential candidate who wins the national popular vote can lose in the Electoral College. 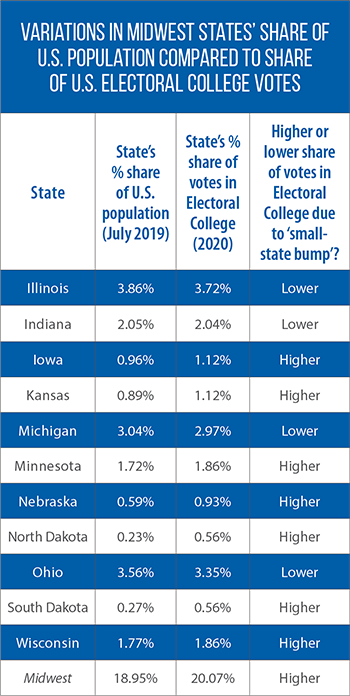