Question of the Month | June-July 2021 | Regulation of Naturopathic doctors

How have states in the Midwest regulated naturopathic doctors?

States regulate medical professions almost as a matter of course, but such is not the case for naturopathic doctors, who rely on the use of “natural healing” techniques such as herbal medicines, homeopathy, and changes in lifestyle and/or diet.

Some critics, though, have said naturopathic techniques are at best untested and unproven or are outright quackery. 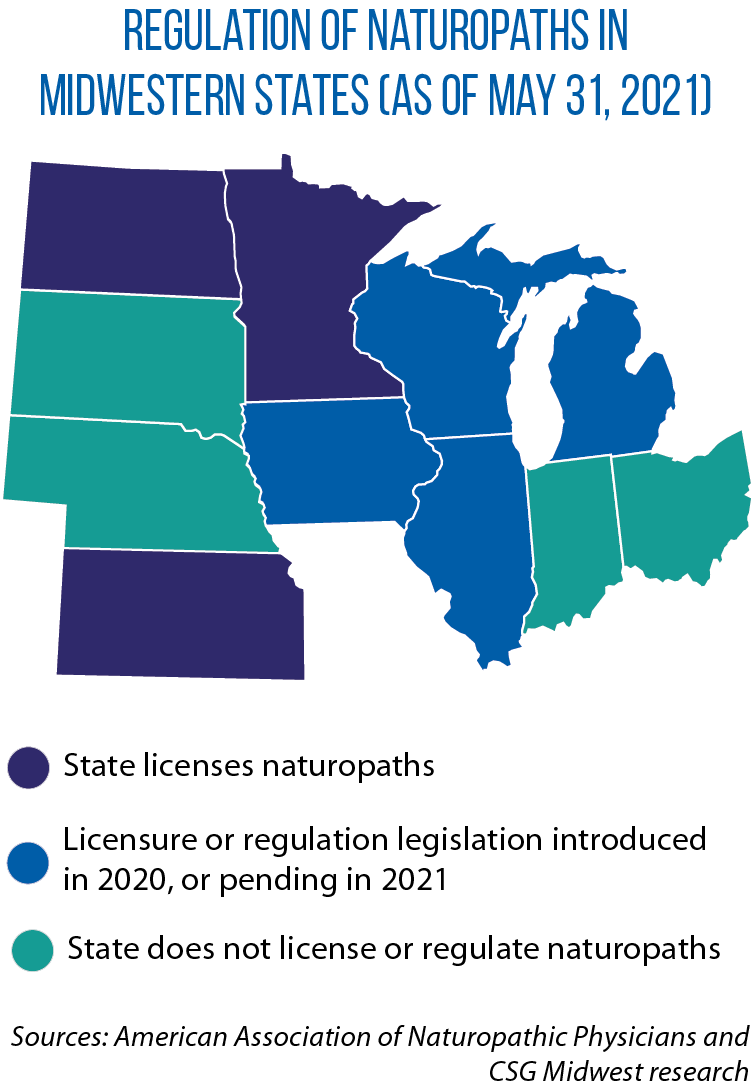 As of March, Kansas, Minnesota and North Dakota were among 19 U.S. states that regulated or offered licensure for naturopathy, according to the association. Naturopathic doctors are licensed and regulated by the State Board of Healing Arts in Kansas, the Board of Medical Practice in Minnesota, and the 10-year-old State Board of Integrative Health Care in North Dakota. (This board also regulates acupuncturists and music therapists in North Dakota.)

While the precise language varies, states’ statutory definitions of naturopathy typically describe it as a system of health care that supports and stimulates a patient’s “inherent” or “intrinsic” self-healing processes.

Kansas, Minnesota and North Dakota do not allow naturopaths to perform surgery or prescribe medication.

The Illinois bills would simply add naturopaths to the list of medical professions already licensed by the state.

Wisconsin’s bills take a different path — they would include naturopaths among practitioners of “complementary and alternative health care practices.” This would exempt naturopaths from licensure, provided they give patients the following:

Wisconsin’s AB 86 and SB 98 (the latter passed the Senate in April) would require a written and signed acknowledgment from the patient stating that he or she had received this information.

Iowa’s HF 404 is similar to the Wisconsin legislation; it did not advance this session.

Naturopathy is also regulated and licensed in Saskatchewan, Alberta, Ontario and Manitoba, according to the Canadian Association of Naturopathic Doctors.

The U.S. Indian Health Service has accepted naturopaths since 2013; in 2018, IHS made them eligible for its qualified student loan repayment program.

Outside the Midwest, naturopathy is banned in South Carolina and Tennessee. A bill pending in Alaska (SB 38) would license naturopaths and allow them to prescribe medication, perform surgery and refer to themselves as naturopathic “physicians” — provisions strongly opposed by the American Medical Association.