In some of the Midwest’s state constitutions, the language on special sessions is clear: The legislature itself can initiate them.

That’s done by a two-thirds vote of legislators (in states such as Iowa, Kansas, Nebraska and South Dakota) or a joint call of legislative leaders (in Illinois and Ohio).

Across the country, in fact, most legislatures have some clearly established authority and means for calling themselves into session, according to The Council of State Governments’ “The Book of the States.”

In Indiana, for instance, no such constitutional language exists, with only the governor being given this explicit authority.

But this year’s HB 1123 established new statutory authority for the Indiana General Assembly to call itself into “emergency sessions” in order to address and pass bills related to a governor-declared state of emergency.

Gov. Eric Holcomb vetoed HB 1123. He contends that the Indiana Constitution gives the governor — and only the governor — the authority to call for a special session.

The General Assembly overrode his veto, leading to one of the more unique lawsuits in the country stemming from recent disputes between states’ legislative and executive branches over COVID-related policies and governor-declared emergencies.

Holcomb sued the legislature, and as of late August, the case was before the Indiana Supreme Court. 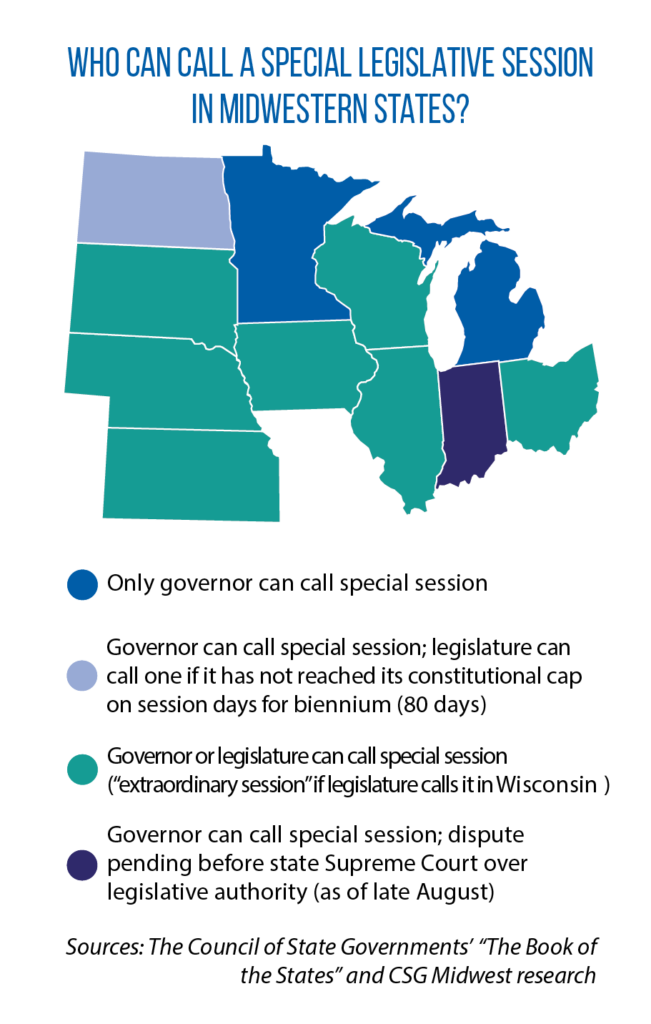 Law professor Cynthia Baker frames the two sides’ legal arguments this way: “Does the Indiana Constitution give the governor sole authority to call the General Assembly into a special session, or can the General Assembly do so under a fundamental rule in reading state constitutions that a legislature has plenary powers to act unless specifically limited by the respective state constitution?”

On the one hand, Baker notes, the Indiana Constitution distributes powers among the three branches, and specifies that “no person, charged with official duties under one of these departments, shall exercise any of the functions of another, except as in this Constitution expressly provided.”

The language on the calling of special sessions is clear. It “expressly provides” this authority to the governor, says Baker, director of the Program on Law and State Government at Indiana University’s Robert H. McKinney School of Law.

On the other hand, state constitutions generally limit, rather than grant, powers. So unless there is language specifically limiting a legislature’s ability to do something, Baker says, “it’s understood that the legislature does have plenary power.”

As part of HB 1123, too, legislators included language citing their constitutional authority to adopt laws that “determine the length and frequency of … sessions.

Two years ago, the Wisconsin Supreme Court ruled that “extraordinary sessions” called by the Legislature are constitutional.

Wisconsin’s Constitution (like Indiana’s) only gives the governor authority to call a special session. But in its decision, the court cited other constitutional language directing the Legislature to meet “as provided by law,” along with a specific state statute giving the legislature the discretion to determine its own “work schedule.”

This schedule can include setting aside time to meet in extraordinary session, the justices ruled in a 4-3 decision.