Question of the Month | September 2021 | Physical restraints in schools

QUESTION: Do Midwestern states have laws banning schools' use of physical restraints, and if so, did such laws include a phase-in period?

Earlier this year, Illinois became of the latest states to update its laws on how and when schools can physically restrain students and place them in seclusion.

HB 219 bars school workers from locking children alone in seclusion spaces and limits the use of isolated timeout and restraints to situations in which there is “imminent danger of physical harm.” These new restrictions will be phased in over the next three years as school staff across the state receive training in areas such as crisis intervention and positive behavioral supports.

As initially passed by the House, HB 219 also allowed for a two-year phase-in of a ban on prone restraint, in which a student is held face down on the floor. However, subsequent legislative negotiations banned the use of prone restraint after this school year, and it only can be used this year if the school staff member has been properly trained and if prior restraint is allowed in the student’s behavioral intervention plan. 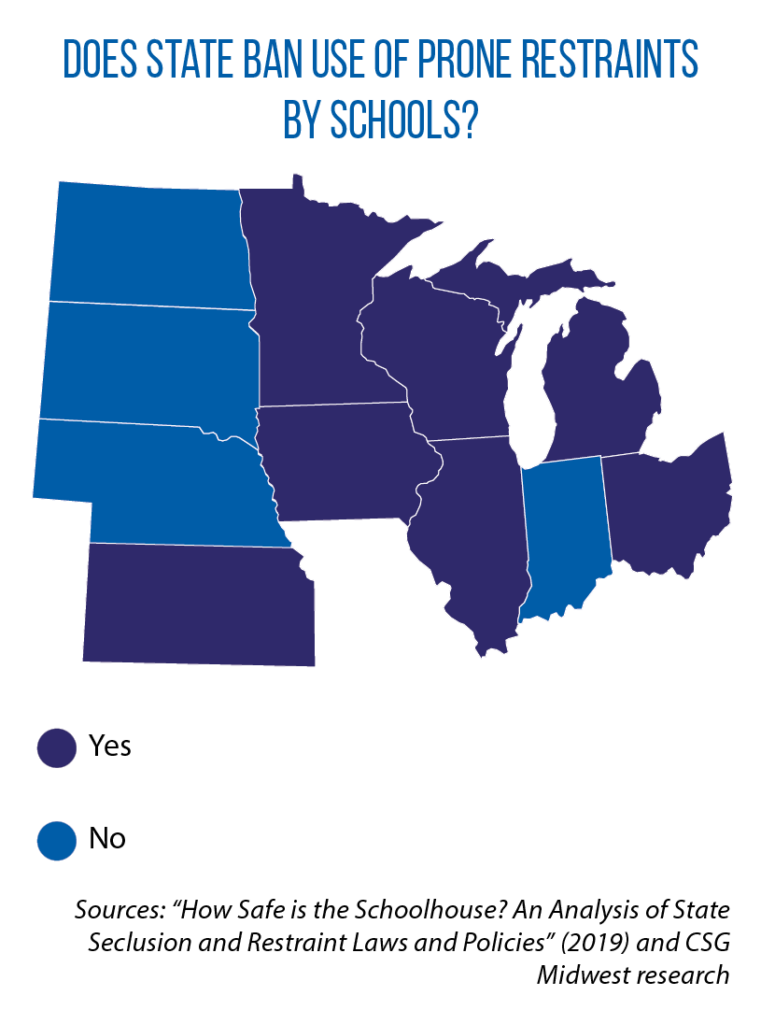 In the Midwest, seven states (including Illinois; see map) have bans on the use of prone restraint. At least three of these states also allowed for some kind of phase-in before the prohibition took effect: one year in Kansas and Michigan, for example, and one month in Iowa.

Prior to this year, Illinois had existing statutory language and regulations that limited the use of seclusion and restraint.

However, in late 2019, a collaborative investigation between ProPublica and the Chicago Tribune found that seclusion rooms and physical restraint were being used in Illinois schools far more often than reported to the federal government, and for reasons not allowed under state law.

Investigators found that of 35,000 documented incidents in 100 school districts from fall 2017 through December 2018, one-third of seclusions and one-fourth of restraints did not list safety as the reason for the actions taken. There were also major issues with the schools’ self-reporting. One school district reported only four seclusion incidents to the U.S. Department of Education in 2015-’16, but district records showed 848 isolated timeouts during the following year and a half.

In some schools, investigators found, isolated seclusion (sometimes combined with prone restraint) became the go-to punishment – for offenses as minor as pushing a book off a desk.

Illinois’ ban on seclusion was lifted shortly thereafter, but much stricter rules on when isolated timeouts could be used remained and state oversight was increased. Then, in April 2020, the State Board of Education lifted the ban on prone restraints after some schools complained that they did not have enough time to transition to other methods.

The General Assembly then intervened this year with the passage of HB 219.

In 2020, Wisconsin legislators passed a measure explicitly banning the use of prone restraints on all students. SB 527 also created rules on training, data collection and parental notification of incidents involving seclusion and physical restraint.