Question of the Month | October 2021 | How states adopt revenue estimates

In the 11-state Midwest, who establishes the official revenue estimate that guides the development of state budgets?

States use a mix of approaches, but in this region, the “who” always includes either members of the executive branch or their designees. The legislative branch also often has a role in the development of official revenue estimates.

Five Midwestern states, for instance, have statutory language calling for an inter-branch, consensus approach to this part of the budget process. 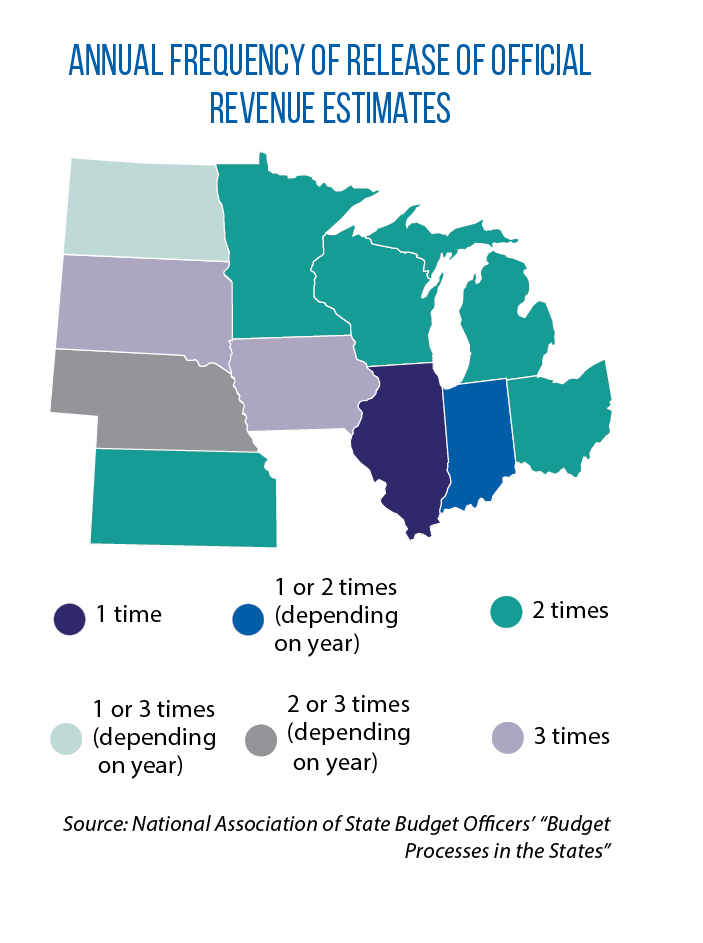 In contrast to these five states, Minnesota leaves revenue estimating to the executive branch. A state economist within the Department of Management and Budget prepares twice-a-year revenue estimates for the governor and Legislature. A Council of Economic Advisers reviews the assumptions and methodologies used by the department.

In other states, separate or competing revenue forecasts are established by the legislative and executive branches. For example, early in session, the South Dakota Legislature’s Joint Committee on Appropriations votes on a “revenue target” after hearing independent estimates prepared by the two branches.

In states such as Illinois, Ohio and Wisconsin, the governor’s proposed budget is based on revenue estimates generated by executive departments or agencies. However, lawmakers also can use forecasts developed independently by legislative fiscal staff.

Revenue forecasting in North Dakota is led by the Office of Management and Budget, with an interim legislative committee in place to scrutinize the executive branch’s data, models and findings. The legislative branch also conducts economic forecasting of its own. Many states also report using economic consulting firms to help establish their estimates.