To pump up use of E15, Minnesota invests in new biofuels infrastructure at service stations

Not only is the nation’s ethanol production concentrated in the Midwest, so are the policies that have been adopted to grow this part of the agricultural economy. One state that has consistently led the way — dating back to adoption of a first-of-its-kind incentive payment for ethanol producers in 1986, and the first E10 mandate in 2003 — is Minnesota.

And lawmakers there are now zeroing in on the need to support a next-generation biofuels infrastructure. Earlier this year, they allocated $6 million over the biennium for such infrastructure projects. One of the primary goals: Improve consumers’ access to higher blends of ethanol, by increasing the number of Minnesota service stations that offer E15.

State dollars will go to retailers and distributors who install the underground storage tanks, piping, pumps and other equipment needed for fuels containing up to 25 percent ethanol. 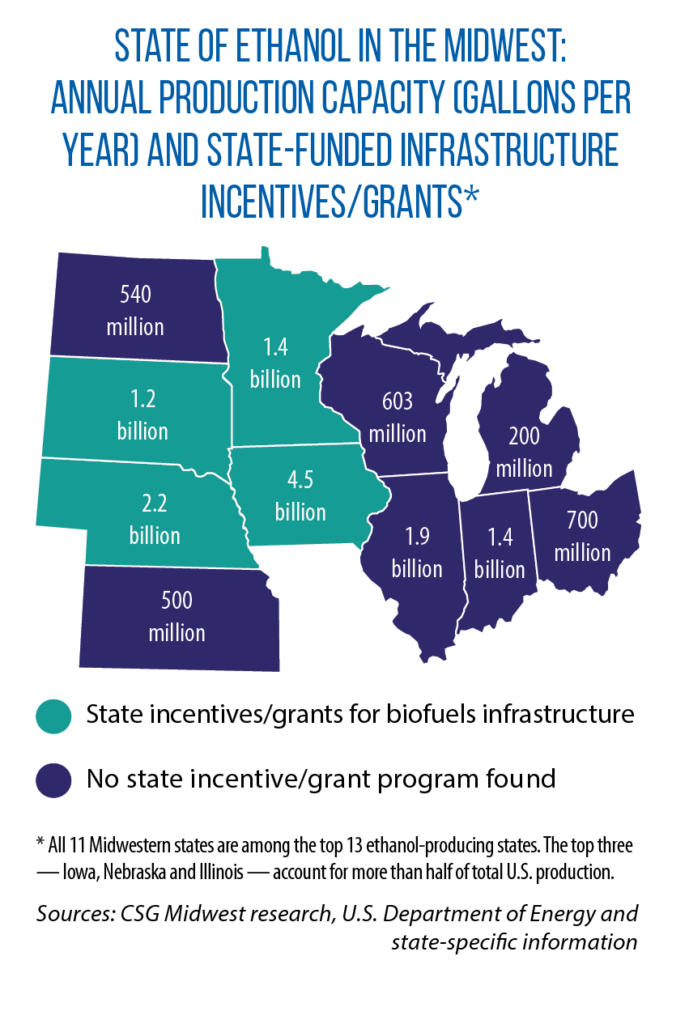 In his home state, too, many ethanol plants began as farmer-owned cooperatives, thus generating even-greater economic benefits for local economies and corn producers. But the industry has faced challenges in recent years.

Two years ago, Minnesota Gov. Tim Walz noted that low market prices and changes in federal policy were slowing growth. In response, he formed a Governor’s Council on Biofuels, and one of the group’s core recommendations (released in late 2020) was to upgrade the fuel-dispensing infrastructure — a necessity if Minnesota wanted to move to higher blends of biofuels. The council found, for example, that only 15 percent of the state’s service-station sites were compatible with E15.

Other states in the Midwest also have recognized this infrastructure need and established their own grant programs (see map).

Another potential source of funding is a state’s association of corn growers. Minnesota Corn is providing an additional $1 million, on top of the $6 million legislative appropriation. The Kansas Corn Growers Association has a privately funded program as well, says Josh Roe, the group’s vice president of policy. (According to Roe, each plant in Kansas averages 45 employees, with salaries averaging more than $59,000.)

In late 2021, another funding source became available: the federal government. The U.S. Department of Agriculture announced in December that $100 million in grants would be available for the biofuels infrastructure, including blender pumps.

Along with its emphasis on investing in infrastructure, the Minnesota Governor’s Council on Biofuels is recommending that the state advocate for a low-carbon fuel standard (LCFS) across the Midwest. (Legislation to create such a standard for Minnesota alone was introduced but not passed this year.)

A few states outside this region already have adopted an LCFS. California is targeting a 20 percent reduction in average carbon intensity from transportation fuels by 2030. To reach this standard, fuels are evaluated on their carbon intensity, and a series of market-based incentives (LCFS credits) are then used to encourage the development and use of low- or zero-carbon options.

The idea has particular appeal in the Midwest because ethanol and biodiesel would be among the low-carbon fuels. The consulting firm ICF International has analyzed the potential impacts of a clean-fuels policy in Minnesota and Iowa, using a 15 percent reduction in carbon intensity by 2030 as an economic model. It found that such a policy would support 15,000 new jobs and generate $946 million in employment income.