Over the past year, the U.S. population grew — but barely. The growth rate of 0.1 percent between July 1, 2020, and July 1, 2021, marks the lowest year-over-year increase since the nation’s founding, and the most recent U.S. Census Bureau data also show the number of people living in the 11-state Midwest actually on the decline. 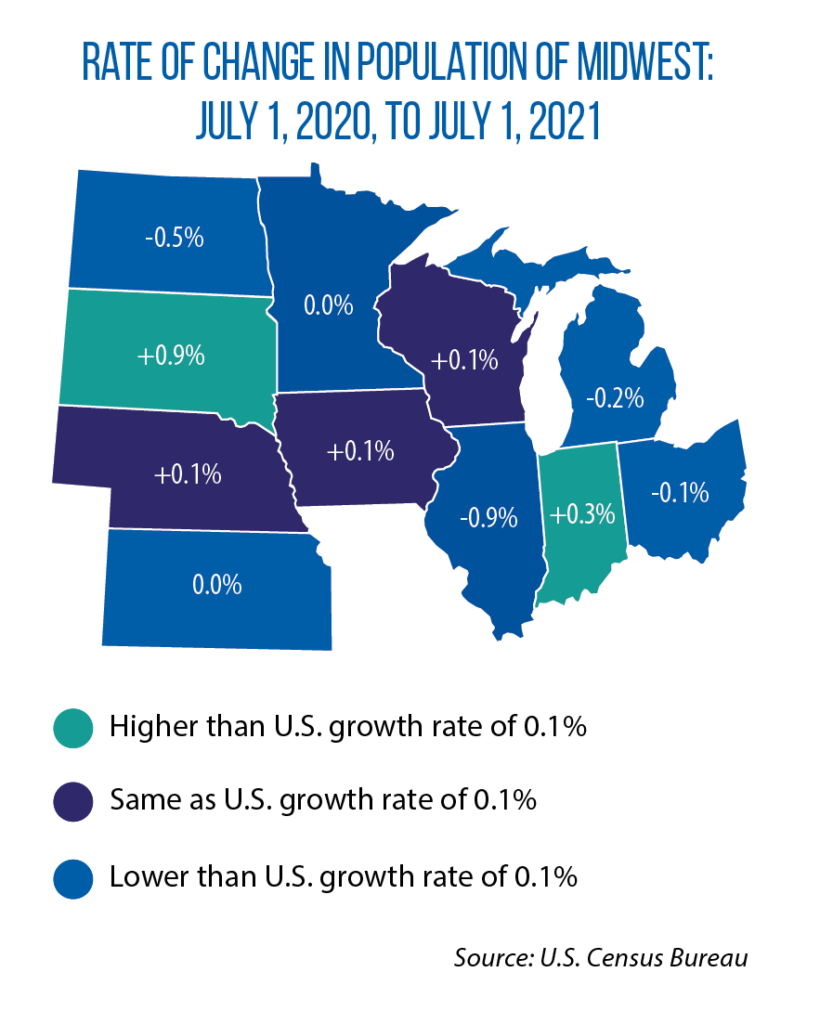 Both regionally and nationally, three factors for this stagnation are less international migration, lower birth rates and increased mortality due to the COVID-19 pandemic. For example, Michigan, Ohio and Wisconsin were among the 25 U.S. states where the number of deaths exceeded births. (Historically, it has been much more typical for all states to have year-over-year natural increases in population.) The United States continues to add people due to net international migration, but at much lower levels — 244,622 between 2020 and 2021 compared to 1,049,000 between 2015 and 2016.

A fourth factor in the Midwest is the loss of people due to the movement of residents from one state to another. In Illinois alone, this caused a net decline of 122,460, third-highest in the nation (behind California and New York). Over the past year, Kansas, Michigan, Minnesota, Nebraska, North Dakota and Ohio also lost people because of trends in domestic migration. South Dakota led the Midwest in the overall rate of population growth (+0.9 percent) between 2020 and 2021, and Indiana had the largest increase in terms of sheer numbers of residents (+20,341).

In an analysis of national trends, Brookings Institution demographer William Frey pointed to the declines in fertility and immigration, noting the long-term impacts on youth and labor-force-age populations. “It is vital that we examine public policies that can overcome barriers to the bearing and raising of children,” he wrote, “and, probably most important, stimulate immigration in ways that will reinvigorate the nation’s population growth.”

In Canada, between the summers of 2020 and 2021, the total population increased by 0.5 percent, the slowest annual rate in more than a century. The primary factor was border restrictions put in place to control the spread of COVID-19. Saskatchewan experienced an increase of only 0.05 percent, with one cause being the domestic migration of Canadians to coastal provinces.