Capital Closeup: How legislative pay is set — A look at a recent Illinois court case, and review of other state laws

More than a decade ago, when the Great Recession rocked state budgets across the country, Illinois legislators passed bills over multiple years to freeze their own scheduled cost-of-living salary increases and to require each member of the General Assembly to take unpaid furlough days.

Were these moves constitutional?

That question came before the Illinois Supreme Court this year, in a case brought by two now-former legislators who based their lawsuit on this language in the state Constitution: “Changes in the salary of a member shall not take effect during the term for which he has been elected.”

The two lawmakers said that the legislatively enacted changes in pay took effect mid-term, thus violating language in the Legislative Salary Clause. Illinois’ top court ruled against the former legislators, but its decision left the question about the constitutionality of mid-term salary freezes unresolved.

Instead, the justices ruled against the two plaintiffs because they had waited too long to make their claim and had voted for the salary freezes while in office. “[As a result,] they cannot now be allowed to challenge the reductions in their salaries during their previous terms in office,” the court concluded. 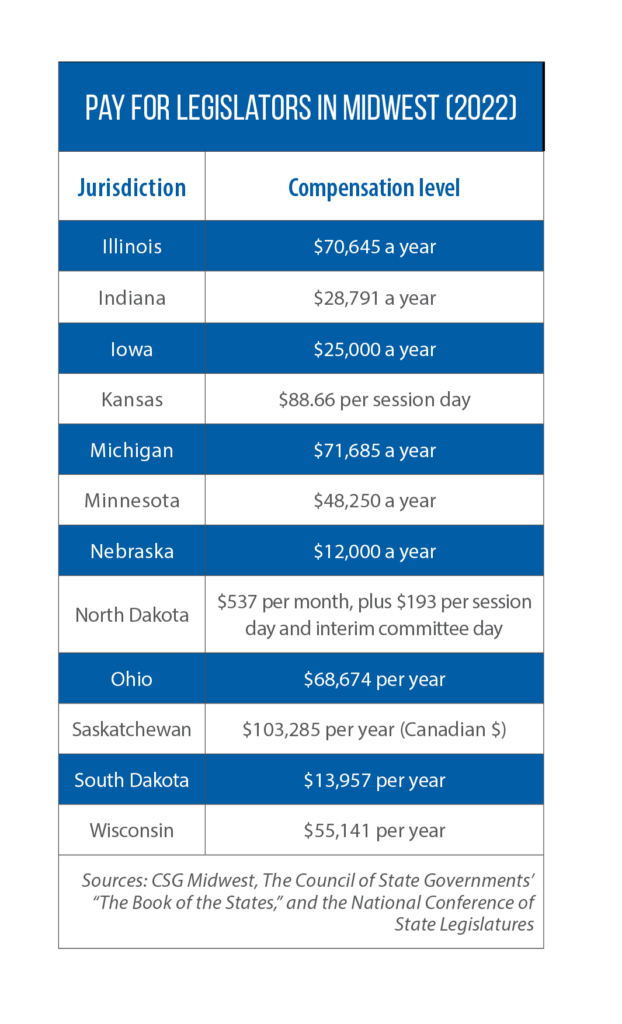 According to the Chicago Tribune, if all legislators serving in the General Assembly during this period had requested and been ordered back pay, the cost to taxpayers would have been $10 million or more.

In Illinois, a Compensation Review Board recommends salaries for various state officials, including members of the General Assembly. Decades ago, at the board’s suggestion, lawmakers included statutory language that triggers automatic cost-of-living adjustments to legislator pay.

In most Midwestern states, legislators vote on their own salary levels and any changes to them. But there are exceptions; for example, an independent, citizen-run Legislative Salary Council establishes pay levels in Minnesota; and Nebraska’s Constitution caps legislative pay at $1,000 per month.

Additionally, South Dakota’s legislative salaries are adjusted annually to equal 20 percent of the state’s median income; and Indiana uses a statutory formula that sets the pay of legislators at 18 percent of that of trial court judges. In Wisconsin, a joint legislative committee approves the pay of members by either adopting or amending recommendations made by the state director of employment relations.