A bipartisan group of Wisconsin lawmakers is attempting to change how the state’s criminal justice system treats minors who are arrested on prostitution charges.

Instead of criminal prosecution, AB 185 and SB 245 would grant children immunity under a so-called “safe harbor” model.

For Wisconsin, the issue of child trafficking and prostitution isn’t new. Six years ago, a nationwide human trafficking raid organized by the FBI resulted in Wisconsin having the third-highest number of children rescued from traffickers — with a majority occurring in Milwaukee. Around that time, a member of a Milwaukee-based anti-trafficking task force referred to the city as the “Harvard of pimp school.”

“Trafficking of children occurs in all 72 counties; in fact, in the last 15 months, there were 99 substantiated reports to our Department of Children and Families of child sex trafficking,” she explains. “Half of those cases occurred in Milwaukee, while the other half occurred throughout the rest of the state.”

According to self-reported data documented by the National Center for Missing & Exploited Children, throughout 2020 there were 359 reported cases of children missing in Wisconsin, among which 19 are considered active.

According to Billings, part of the inspiration for her proposal came from seeing the effects of similar safe-harbor provisions in neighboring Minnesota.

Convictions of sex traffickers quadrupled with the new law in place, she says, as their victims were able to testify and assist in investigations without fear of prosecution.

Despite the increase in trafficker prosecutions, the existence of child prostitution has continued.

In 2019, the Minnesota Department of Education and various public health agencies administered a statewide student survey. One of the questions in the survey asked high schoolers in grades nine and eleven “Have you ever traded sex or sexual activity to receive money, food, drugs, alcohol, a place to stay, or anything else?”.

Sarah Bendtsen Diédhiou of the Christian, anti-trafficking organization Shared Hope International says the true effectiveness of a safe harbor law is improving how children interact with the justice system.

“[It] oftentimes prevents re-exploitation,” she says.

“If you take a child who has experienced trafficking, victimization or exploitation, and from the outset you’re applying that mentality of not “What did you do?” but “What happened to you?”, not only can you start chipping away at some of the traumatic experiences that the child has had … but you’re not adding to the trauma through that response.” 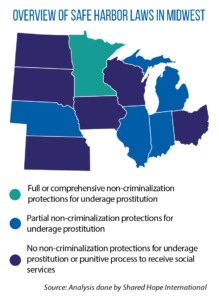 Bendtsen Diédhiou adds that there are important distinctions between state laws that fall under the “safe harbor” banner (see map).

Some statutes, such as Minnesota’s, completely eliminate any criminalization of minors, including arrest charges, detention and prosecution. Other laws do not and/or present hurdles before an individual can access social services.

Sponsors of the Wisconsin bills are advocating for full non-criminalization.

“The monsters who force children into sex trafficking will no longer be able to use the threat of prosecution for prostitution as a way to keep kids in a cycle of abuse,” Sen. Alberta Darling, the chief sponsor of SB 245, said in a statement.

Also important to Billings: Don’t tie safe harbor to the child having to provide information against the trafficker.

“To keep a child safe, do we want to put them in charge of turning over this incredibly powerful, scary person that’s been in their lives, often when they’ve been groomed to not trust law enforcement?” she says.

“That’s just not a realistic expectation.”

Billings notes, too, that a criminal conviction can negatively impact a victim’s ability to later receive financial aid for college or find employment.

Beyond safe harbor, Wisconsin has and is continuing to introduce measures to help trafficking victims.