Question of the Month | January/February 2022

Do states have laws or rules governing the use of race-based mascots by their public schools or universities?

Much legislative activity has occurred over the past decade, with most new laws focusing on limits or bans on the use of mascots with Native American imagery. Still, as of late last year, close to 2,000 public K-12 schools in the United States had Native-themed mascots/names, according to the National Congress of American Indians. 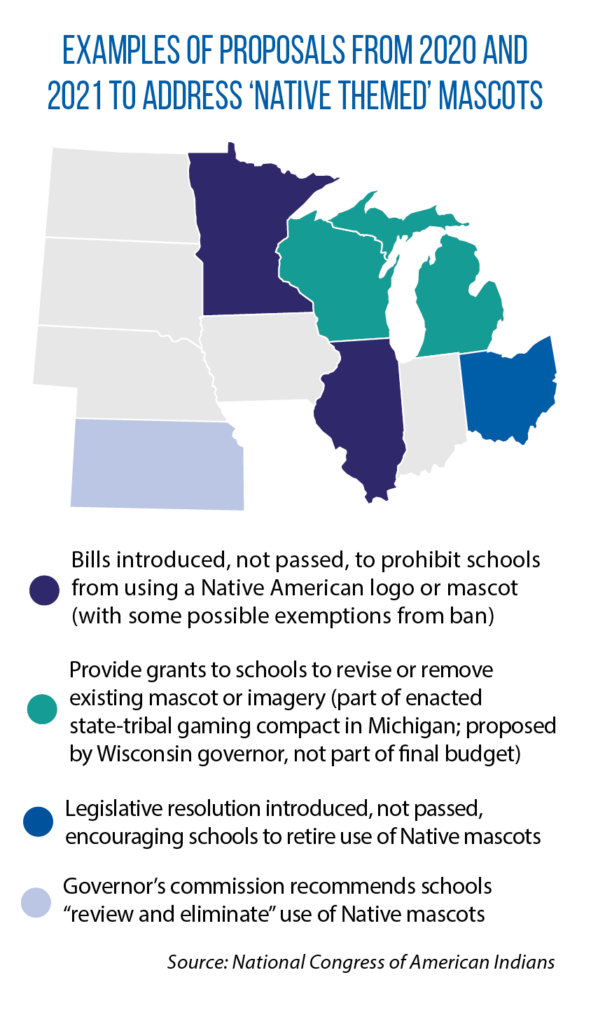 That includes schools in Kansas, where a governor’s commission said in 2021 that “the time is right for the state … to take intentional steps to remove the use of Native American mascots and related imagery in public education settings.”

One of its recommendations: consider adoption of a law modeled after Nevada’s AB 88. That measure, signed in 2021, requires school boards to adopt a policy that prohibits names, logos, mascots, songs or other identifiers that are racially discriminatory or contain racially discriminatory language or imagery. To use a name or mascot associated with a federally recognized Indian tribe, a Nevada school must now get approval from the tribe.

In 2015, with the passage of AB 30, California became the first U.S. state (and only to date) to directly ban a specific school mascot or nickname — “Redskins.” Four years later, Maine became the first state to impose an outright ban on the use of Native American mascots (LD 944). Colorado and Washington joined Maine in 2021.

Colorado’s law (SB 21-116) covers public schools, including charters, as well as colleges and universities. It takes effect on June 1, 2022. Non-compliant schools will face fines of $25,000 per month. Washington’s HB 1356 prohibits “the inappropriate use of Native American names, symbols or images as public school mascots, logos or team names.”

Connecticut has taken a different approach. In that state, municipalities get grant dollars from a pool of revenue generated by tribal-owned and -operated casinos. As part of Connecticut’s new budget, municipalities will lose this grant money if their local public schools or associated athletic teams use Native American names, symbols or images without tribal consent.

In the Midwest, legislation passed in Wisconsin more than a decade ago set up a process for removal of a race-based mascot/name. Under that law, a single resident of a school district could file a complaint with the state school superintendent. That law was short-lived, however. In 2013, Wisconsin began requiring a complainant to collect signatures of 10 percent of the school district’s population to initiate the removal process (AB 297). Review of the complaint was shifted from the state school superintendent’s office to the Department of Administration, and those seeking a change in the mascot/name have the burden of proving by “clear and convincing evidence” that its use promotes discrimination, pupil harassment or stereotyping.”

Two decades ago, the U.S. Commission on Civil Rights issued an advisory opinion calling for “an end to the use of Native American images and team names by non-Native schools.” A resolution by the American Psychological Association followed in 2005, saying Native-themed mascots “are teaching stereotypical, misleading and, too often, insulting images” and “sending the wrong message to all students.”